What We Know About the Youth Vote So Far: In 11 Key States, Early Data Suggest a Turnout Surge Among Young Americans 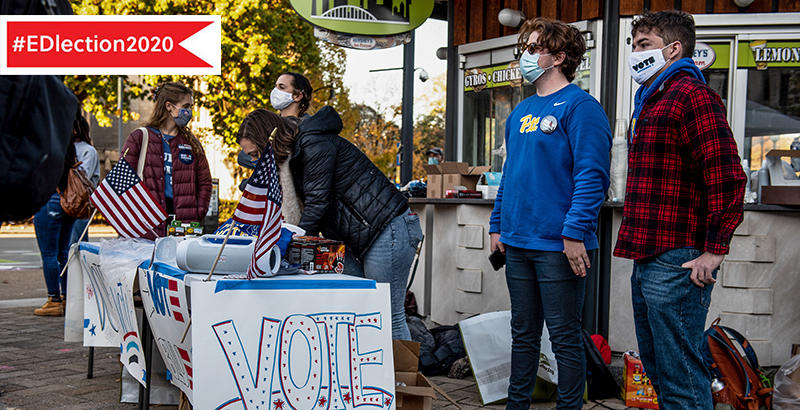 Voter turnout among young Americans has long been lackluster, but early data suggest a substantial uptick in civic participation this time around as the pandemic pushed an unprecedented wave of early voting.

Even before Election Day, some 10 million people 18 to 29 years old cast early or absentee ballots, according to data from Tuft University’s Center for Information and Research on Civic Learning and Engagement. To be clear, the data are part of a larger trend: More than 100 million people across all age groups made their voices heard before Election Day, putting the 2020 election on track to shatter voter turnout records.

What’s that mean for the outcome of the presidential race, once we know it? In several key states, youth turnout, which favors Democrats, could be a major boon for Joe Biden.

NEW – YOUTH TURNOUT IN BATTLEGROUNDS: Our early estimate of aggregate youth turnout for 11 battleground states suggests that nearly half of all eligible young people (47-49%) cast ballots. In many of those states, Biden’s youth advantage may be decisive. https://t.co/BkVQDVmfXJ

One early-voting standout was Texas. Two days before Election Day, more than 1.3 million Texans 18 to 29 cast early or absentee ballots. Why’s that such a huge deal? Well, just 1.2 million Texans in that age group voted in 2016, according to CIRCLE. That includes early, absentee and Election Day votes combined.

Youth voters also make up a bigger share of the total ballots cast this time around. Four years ago, young people cast just 6 percent of early and absentee ballots in Texas. But this year, that percentage more than doubled to 13 percent.

We fought like hell in Texas. Today, it is okay to be sore and tired and depressed, but there’s still work to be done. Record young voter turnout is not something to push aside. Please do not give up on this state or our generation.

It’s not just Texas. In 13 states, young people comprised a larger share of early voters than they did ahead of Election Day in 2016, according to an Oct. 29 data analysis by CIRCLE.

By Wednesday, data further bolstered predictions that youth turnout could be a major player in deciding the still too-close-call election between Biden and President Donald Trump. CIRCLE’s estimates suggested that the aggregate youth voter turnout in 11 key battleground states fell somewhere between 47 and 49 percent. The states include Arizona, Colorado, Florida, Georgia, Iowa, Montana, North Carolina, Ohio, South Carolina, Texas and Wisconsin. As election officials continue to count ballots in some of those crucial states, CIRCLE predicts that youth turnout could jump to between 51 and 53 percent.

That’d be a major change from just four years ago. In 2016, CIRCLE estimates that between 42 and 44 percent of young people made their voices heard in the equally close race between Trump and Hillary Clinton, suggesting a 10 percentage-point jump in turnout this year among voters 18 to 29.