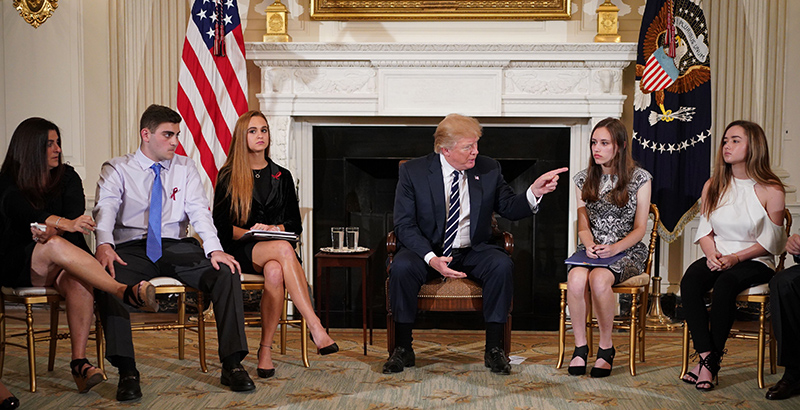 Allowing teachers and other school personnel to carry concealed weapons on school property and eliminating gun-free school zones might be possible solutions to ending the wave of school shootings in America, President Trump said Wednesday.

The solutions Trump discussed stand in sharp contrast to those advocated by the most vocal Douglas students, who have taken to cable news and political advocacy to push for greater gun control. Wednesday they made their case at the Florida state capitol; they also inspired a wave of walkouts and vigils across the country, including a group from D.C. who rallied outside the U.S. Capitol and marched to the White House.

In addition to hearing about survivors’ experiences, Trump asked for solutions to end mass shootings.

Fred Abt, the father of a Parkland student who survived the shooting, suggested allowing teachers and other adults on campus to carry concealed weapons as a way to stop shootings quickly while waiting for first responders. 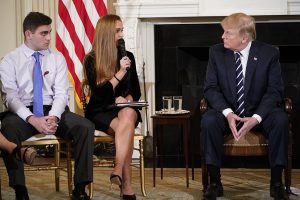 Trump acknowledged there would be opposition to the concealed carry idea, though he said it “could very well solve your problem,” citing less violence on airplanes since pilots have begun carrying guns.

He asked for a show of hands on the issue; though hard to tell from the White House’s live video feed, it seemed more of those in the room opposed the idea than supported it.

“Nobody wants to see a shootout in a school, and a deranged sociopath on his way to commit an act of murder in a school, knowing the outcome is going to be suicide, is not going to care. That’s their plan anyway,” said Mark Barden, whose son Daniel died in the 2012 Sandy Hook shooting.

"Schoolteachers have more than enough responsibilities right now than to have to have the awesome responsibility of lethal force to take a life," Mark Barden, father of Sandy Hook victim, says, whose wife is career educator: https://t.co/qLL6Kp8HYo pic.twitter.com/58oubdGhft

The most conservative Republicans for years have advocated ending federal gun-free school zones, arguing that they make schoolhouses more attractive targets to those who wish to harm students.

“A gun-free zone to a maniac, because they’re all cowards, a gun-free zone is, ‘Let’s go in and let’s attack, because bullets aren’t coming back at us,’ ” Trump said.

Proponents of the gun-free zones, which stem from a federal law passed in the 1990s, have long cited the disparity in the number of students who are hurt on school grounds versus off.

Though the president made the splashiest news with his discussion of concealed carry and gun-free school zones, the most memorable moments of the hour-long session came from those most directly affected by the tragedies, including:

1. Sam Zeif, a senior at Douglas High whose text messages to his brother, a freshman at Douglas, went viral and whose best friend died in the shooting:

“No brothers or sisters or family members or anyone should ever have to share those texts with anyone. That’s why I’m here.

… I’m here to use my voice, because I know [my best friend] can’t. I know he’s with me, cheering me on to be strong, but it’s hard. To feel like this, it doesn’t even feel like a week. Time has stood still … I can’t feel comfortable in my country knowing that people have, will have, or ever [are] going to feel like this. I want to feel safe at school… How have we not stopped this after Columbine, after Sandy Hook?”

And here is Sam Zeif, whose texts with his brother during the shooting went viral, pleading for a change in gun laws: https://t.co/TMt0ULliiP

2. Justin Gruber, 15, a student at Douglas High, on being born after the Columbine shooting:

“I was born into a world where I never got to experience safety and peace. There needs to be a significant change in this country. This has to never happen again. People should be able to feel that when they go to school, they can be safe… Parents shouldn’t have to go through the idea of losing their child.”

Parkland student Justin Gruber to Pres. Trump during White House listening session with those affected by last week's deadly shooting at a Florida school: "There needs to be a significant change in this country, because this has to never happen again." https://t.co/k7MxPTL3tO pic.twitter.com/ddRB8IVC3y

3. Andrew Pollack, whose daughter Meadow, 18, was killed at Douglas:

“We as a country failed our children… We protect airports. We protect concerts, stadiums, embassies. The Department of Education [building in D.C.] that I walked into today, that has a security guard in the elevator. How do you think that makes me feel? … I’m very angry that this happened because it keeps happening…

It’s not about gun laws right now. Let’s fix the schools, and then you guys can battle it out [on gun control]… Never, ever will I see my kid. I want that to sink in. It’s eternity.”

"I can't get on a plane with a bottle of water. But we let some animal … walk into a school and shoot our children" – Andrew Pollack, who lost his daughter Meadow in the Florida school shooting https://t.co/8TgNC9Car9 https://t.co/8WD2hNkICi

“Every parent who sends their kid to school should know, without any question in their mind, that they’re going to be coming home that day. This is not a difficult issue… After Sandy Hook, they said we wouldn’t let this happen again, and yet it has continued to happen for five years… How many more teenagers, how many more 6- and 7-year-olds can we allow to die?”

Nicole Hockley, who lost a child at Sandy Hook:

"My story is far too well-known. I had 2 sons who were at Sandy Hook School. My eldest, who was 8 at the time survived, and my 6-yo son, Dylan, did not. And I have been working tirelessly on this issue for over five years now." pic.twitter.com/Dm2j15wxqn

“We lost 17 lives, but the ripple effects throughout the community are devastating… These two parents talked about guns, and there are absolutely lots of areas where there is room for improvement [mental health, teacher training] … but part of that is also the gun issue. It’s not just those and not the guns. It’s all of them.”

Parkland Mayor Christine Hunschofsky tells Trump: "We have to at some point care enough and be strong enough to come up with solutions."

She says a father who just buried his daughter says he supports the Second Amendment but doesn't see a need for assault weapons.

The participants also discussed several solutions, with some advocating additional shooting drills and training for teachers, more mental health treatments, or laws that would allow authorities to take firearms from people deemed to be a danger to themselves or others.

The president also said he’d look at “age of purchase” — the perpetrator, age 19, was able to legally buy a semi-automatic weapon, but federal law restricts handgun purchases to those over 21 — and “the mental health aspect.”

He has also backed a bipartisan measure to boost reporting to the FBI’s background check system, though the most conservative House Republicans reportedly want to tie it to a bill that would allow people to carry concealed weapons across state lines, dooming it in the Senate.

The Parkland incident was the 11th shooting on school grounds that resulted in injury or death in 2018; at least 23 people have been killed and 41 injured, according to The 74’s ongoing tracking of such incidents.