The Little-Known Education Legacy of John McCain, a ‘Great Champion’ of School Choice 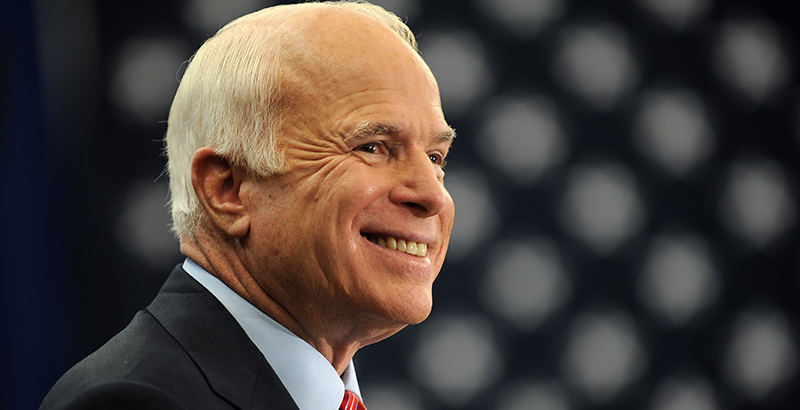 Sen. John McCain, who died this weekend, was known to Americans for his wartime service and sacrifice as a POW, his devotion to defense and military issues, for his candid efforts to clean up campaign finance, and even for his showdowns with President Trump.

Much lesser-known, but still important, advocates say, was his legacy on school choice.

“Notwithstanding all of the other issues he worked on, it’s a great loss for school choice because he was a great champion,” John Schilling, president of the American Federation for Children, told The 74. “He cared deeply about, particularly, low-income kids not having access to better educational opportunities.”

From our team in #Arizona (@AZEdChoice ): A well-deserved tribute to @SenJohnMcCain. When he left us, he was fighting for the nation's Tribal children to have a better future through #SchoolChoice. A true hero. #JohnMcCain pic.twitter.com/Z6XS9ebCMi

In recent years, he worked to expand education savings accounts to students attending long-underperforming Bureau of Indian Education schools, but in the past, McCain had used his perch as a senator and presidential candidate to press for expanded choice for all children.

“It’s the civil rights issue of the 21st century. There’s no doubt that we have achieved equal access to schools in America after a long and difficult and terrible struggle. But what is the advantage in a low-income area of sending a child to a failed school and that being your only choice?” McCain said during a debate with then-candidate Barack Obama during the 2008 presidential campaign.

McCain’s most recent work on school choice, providing education savings accounts to BIE students, was aimed at rectifying a kind of catch-22 for Native American children in his home state of Arizona.

Lawmakers in 2015 had expanded eligibility for education savings accounts, which let parents pay for private school tuition, tutoring, or other expenses, for all children living on Native American reservations.

Only those attending state-funded schools were eligible, however; McCain’s bill would have given the same options to children in BIE schools, which are federally funded.

“I believe that parents should have a choice,” McCain told The 74 in 2016. “Why shouldn’t a person, an individual, who lives on an Indian reservation have that same opportunity?”

Former Arizona state senator Carlyle Begay, who sponsored the bill expanding ESAs to tribal students, said McCain recognized there should be an effort made to expand options for Native American students.

“He made it very clear, he made this very public, that no stone should be left unturned in our efforts to improve educational outcomes so that our Native American kids in particular are prepared for whatever they choose in life, for their goals and their aspirations,” he told The 74.

The bill passed committee on a party-line vote but was never considered on the Senate floor. McCain, ever the straight shooter, acknowledged it, telling The 74 chances for its passage were “poor.”

His work on education choice stretched back even further than the 2008 presidential election, to before his failed 2000 campaign.

McCain in 1999 introduced the Educating America’s Children for Tomorrow Act. It covered a number of areas, including permitting the Education Department to create school-choice pilot programs in up to 10 states, with scholarships funded with at least $2,000 in federal funds and $1,000 in state or local matching funds.

A separate bill introduced later that same year focused just on creating a voucher program, tailored to low-income students in failing schools, with $2,000 in federal funds.

During the 2008 campaign, he spoke to the NAACP in depth on education, calling for a long list of reforms: expansion of the federally funded D.C. Opportunity Scholarship program, alternative certification for teachers, federally funded tutoring, virtual schools, bonuses for high-achieving teachers based “on the success of their students” and those who “take on the challenge of working in our most troubled schools,” and “school choice for all who want it.”

“Americans have heard a lot of tired rhetoric about education,” McCain told the NAACP. “We’ve heard it in the endless excuses of people who seem more concerned about their own position than about our children. We’ve heard it from politicians who accept the status quo rather than stand up for real change in our public schools. Parents ask only for schools that are safe, teachers who are competent, and diplomas that open doors of opportunity … No entrenched bureaucracy or union should deny parents that choice and children that opportunity.”

Disclosure: The Walton Family Foundation provides funding to the American Federation for Children and The 74.