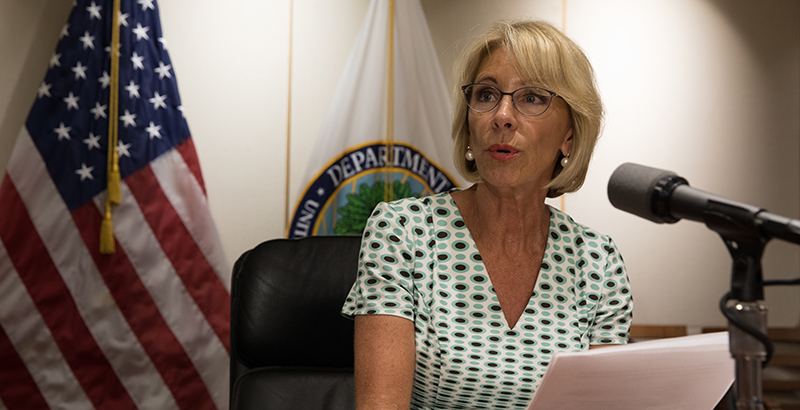 Secretary of Education Betsy DeVos holds a press conference at the Department of Education July 13, 2017, after a day of meetings weighing whether to keep or reject Obama-era guidance that laid out how schools must meet their obligations under Title IX. (Evelyn Hockstein/For The Washington Post via Getty Images)

The Education Department and Republicans in Congress have unwound a host of major Obama-era policies, from protections for transgender students to tough school accountability rules under the Every Student Succeeds Act.

Now, according to The New York Times, Education Secretary Betsy DeVos will make major changes to the way colleges — and K-12 schools — must respond to allegations of sexual assault and harassment under Title IX, which prohibits discrimination in education on the basis of sex.

Critics have long said that the 2011 Obama administration guidance, which was made through a “Dear Colleague” letter, didn’t go through the proper rulemaking channels and, in encouraging schools to beef up investigations and protections for victims, unfairly tipped the scale against the accused. Women’s groups said undoing them would revert to a time when sexual assaults were swept under the rug.

The proposed regulations, which the Times reported late Wednesday afternoon, come almost exactly a year after DeVos first announced, to much criticism from victims and feminist groups, that she would alter the standards and boost protections for alleged perpetrators.

“The truth is that the system established by the prior administration has failed too many students. Survivors, victims of a lack of due process, and campus administrators have all told me that the current approach does a disservice to everyone involved,” DeVos said last September when she announced changes were coming.

Sen. Patty Murray, the top Democrat on the Health, Education, Labor and Pensions Committee, in a statement said it is “shameful and appalling” that DeVos would issue a rule that would make it harder for assault victims to seek justice.

An Education Department spokesperson declined to comment to the Times Wednesday, saying officials are still deliberating and any information the paper had was “premature and speculative.”

The now-overturned Obama-era regulations required schools to use a lower “preponderance of the evidence” standard, rather than a more stringent “clear and convincing” mandate.

Changing evidentiary standards, particularly at the start of the school year, when most assaults occur, creates uncertainty for survivors of assault and could open the door to lawsuits by perpetrators who were convicted under different standards, experts told The 74 last year.

Other changes, according to the Times, include:

2. Only events on campus must be investigated. The Obama administration required schools to investigate all allegations made by students, but the DeVos rules would require investigations only of events that occurred within their own programs or on their campuses.

3. Victims and perpetrators could request information and cross-examine each other: The Obama administration had discouraged schools from allowing parties to question one another, arguing that it could be more traumatic for the victim.

The proposal would still have to go through a formal notice and comment period, after which the department would release a final version. There is at least one lawsuit, brought by women’s groups, attempting to block the department’s interim policy.