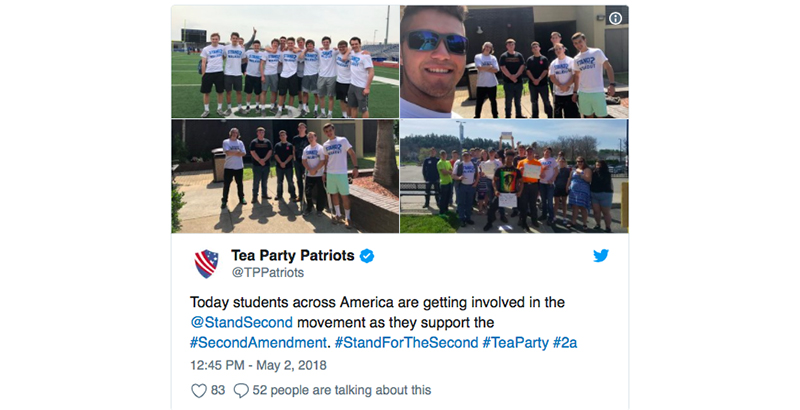 In a twist on recent school-based activism, students across the country marched out of class Wednesday to show their support for the Second Amendment and to oppose new gun control policies.

The event was a direct response to previous school walkouts that popped up in support of new gun control measures after a gunman opened fire at Marjory Stoneman Douglas High School on February 14 and left 17 people dead. Wednesday’s event, however, was far smaller in scale, with students from roughly 300 schools registering to participate.

Will Riley, an 18-year-old senior at Carlsbad High School in New Mexico who organized Wednesday’s “Stand for the Second” national school walkout, said he was satisfied with the engagement he saw from students across the country. In organizing the walkout, Riley received support from the National Rifle Association and the conservative nonprofit Tea Party Patriots.

“This is not a united front from our generation on gun control issues,” he told The 74. “I’m glad that we are at least able to give the people who knew about this [walkout] a platform to speak up.”

Riley said the event was also a test for school districts across the country. Schools that punish students for walking out Wednesday, he said, could be engaged in “viewpoint discrimination.” On March 14, students from about 2,800 schools across the country walked out of class to support gun control. While students from some schools faced punishment for their civil disobedience, protesters in other districts walked out of class without repercussion. In some cases, educators participated in the walkout alongside students.

“I’ve had a lot of students tell me, ‘They allowed the other walkout. Now they’re saying I’m going to be expelled for participating in this walkout,’ ” Riley said. “It is based entirely on the fact that the school does not agree with this viewpoint.”

At his own school, Riley accused administrators of putting up several roadblocks to discourage participation, though school leaders had supported previous walkouts in favor of gun control. At schools across the country, Riley had encouraged students to walk out at 10 a.m. for 16 minutes, one minute less than the walkout on March 14. In order to avoid disrupting standardized testing, students at Carlsbad High School scheduled their walkout for 3:34 p.m., the last 16 minutes of the school day.

In response, district superintendent Greg Rodriguez said school officials worked collaboratively with Riley as he planned the walkout. He said school officials treated student protesters, both those for and against gun control measures, equally. Neither camps faced punishment at school so long as their activism didn’t disrupt the school environment.

“The administration and the principal have been very supportive of the students expressing their First Amendment rights,” Rodriguez said. “We are willing to work with all our students to make sure that they’re actively engaged. We support their constitutional rights, and as public school servants, we are proponents of supporting the Constitution and all of the amendments.”

In an Attempt to Counter Parkland Activists, Student Second-Amendment Enthusiasts to Stage Walkout in Support of Gun Rights

Wednesday’s walkout did face some opposition, even among Second Amendment proponents. Kyle Kashuv, a Parkland student survivor who met with President Donald Trump to share his support for the Second Amendment, tweeted that he would not participate in Wednesday’s event. “There’s a time and place for civil disobedience, I just don’t believe that time is now,” he wrote.

Please do not walk out. https://t.co/nP1AWKD2kI

I will not be walking out today. I don't believe it is the correct thing to do. Disrupting 1000s of classrooms around the country isn't the answer. There's a time and place for civil disobedience, I just don't believe that time is now.

Responding to Kashuv’s tweet, Riley said he didn’t want the walkout to unduly disrupt learning, but he still believes the protest was important.

“I think if we really look at the underlying issues here,” Riley said, “it is important that we do it in this way in order to expose viewpoint discrimination.”

Although Riley said the event was designed to highlight students who oppose gun control policies, a recent poll of school-age youth suggests they are in the minority. In the Pew Research Center survey, conducted after the Parkland shooting, 86 percent of teens ages 13 to 17 said laws that prevent people with mental illnesses from purchasing guns would be effective in preventing school shootings, as would improving mental health screenings and treatments.

Meanwhile, 79 percent of surveyed teens said metal detectors in schools would be an effective strategy to prevent shootings, and 66 percent said the same about a ban on assault-style weapons. A far smaller portion of the students — 39 percent — said arming teachers would be effective in preventing school shootings.

Delaying College, Getting Out the Vote: As They Stage Another National Walkout Over Gun Violence, Students Look to Movement’s Sustainability

Not many walked out today at our school, mostly due to the fact we could not hang posters or get word out due to it being political. Very proud in the people that took a stand all around the US! @StandSecond #standforthesecond #2a pic.twitter.com/qiHp9oxHQc

NOW: Dozens of students walk out of Tigard High School as part of nationwide #StandForTheSecond movement in support of the Second Amendment and #GunRights. @StandSecond pic.twitter.com/rADfQWTvbl

About 100 students in Columbia Falls, Montana are walking out for #StandForTheSecond supporting #2A. #mtnews pic.twitter.com/NSkjuF2MZQ

Today students across America are getting involved in the @StandSecond movement as they support the #SecondAmendment. #StandForTheSecond #TeaParty #2a pic.twitter.com/J2216eMdoK

Collin Thorup, 16, walked out of his West Valley City classroom around 10 this morning in support of nationwide @StandSecond demonstration #SecondAmendment @CityWeekly pic.twitter.com/OtZVoPo9FS