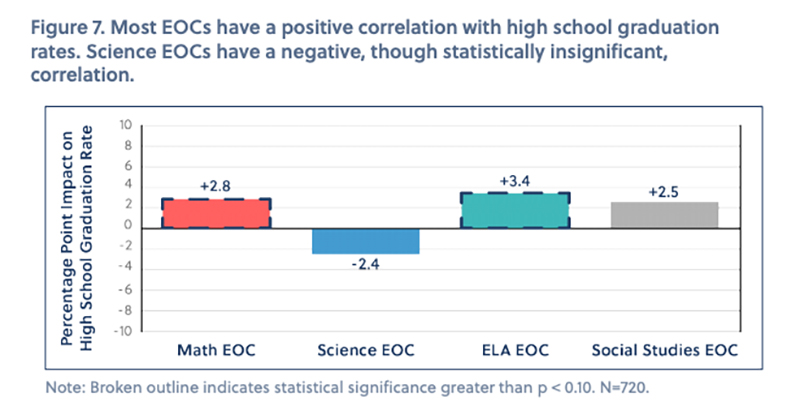 Amid a backlash over standardized testing, states across the country have moved away from requiring high school students to take end-of-course exams. But it’s a decision policymakers in those states may soon regret, according to a study released Tuesday by the Thomas B. Fordham Institute.

That finding suggests that state policymakers should bolster the number of end-of-course exams students take rather than cutting back, said Adam Tyner, Fordham’s associate director of research and a co-author of the study.

States that use such exams “do seem to be outperforming the places that don’t have” them, he said. “It does seem like places that are really centering their high school accountability systems around [end-of-course exams] are having the clearest effects.”

States’ use of the exams, which assess students’ mastery of course content, began to take off in the mid-’90s, with 32 states and the District of Columbia using them in some fashion over the past few decades. In more recent years, however, states’ reliance on the exams has been declining, with some watering down the stakes associated with the tests and others eliminating them altogether. By 2020, graduating seniors in just 26 states are expected to take end-of-course exams. 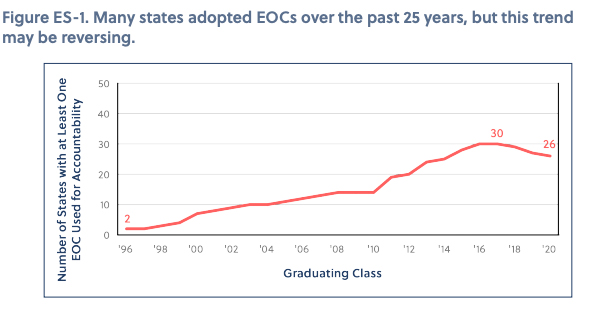 Findings on the Fordham report, which explores the correlation between student outcomes and the use of end-of-course exams in 32 states and the District of Columbia over the past two decades, differ from recent studies on exit exams, which students are required to pass in some states in order to graduate. Numerous reports link exit exams to a lack of improvement in academic achievement and higher dropout rates. In recent years, states’ use of both exit exams and end-of-course assessments has declined.

The report, which includes a foreword that describes researchers at the right-leaning Fordham as “accountability hawks,” argues that external assessments like end-of-course exams maintain uniform content and rigor in core subjects and minimize concern over grade inflation. Additionally, the exams can encourage students to take core courses more seriously, the report argues. As districts work to improve high school graduation rates, external assessments are necessary to hold both schools and students accountable, Tyner said.

“If you don’t have anything like that and you do have a big pressure to raise graduation rates, it creates incentives for administrators and all the adults in the system to play games with how you’re passing students,” Tyner said. “Really, it creates an incentive to lower standards.”

Beyond graduation rates, researchers did not find a statistically significant correlation between state mandates for end-of-course exams and students’ scores on college entrance tests. However, students in states that employed eight or more math exams outperformed the average ACT score by four to five points. That finding, according to the report, suggests that the benefits of taking end-of-course exams may be cumulative.

Findings in the report do raise equity concerns about the exams. For black and Hispanic students, the report found, end-of-course exams in English correlated with a 3.7-percentage-point gain in graduation rates — but science tests correlated with a 5.2-percentage-point drop. Overall, increasing the number of end-of-course exams didn’t appear to improve black and Hispanic students’ chances of graduating from high school.