The Exit Exam Paradox: Did States Raise Standards So High They Then Had to Lower the Bar to Graduate? 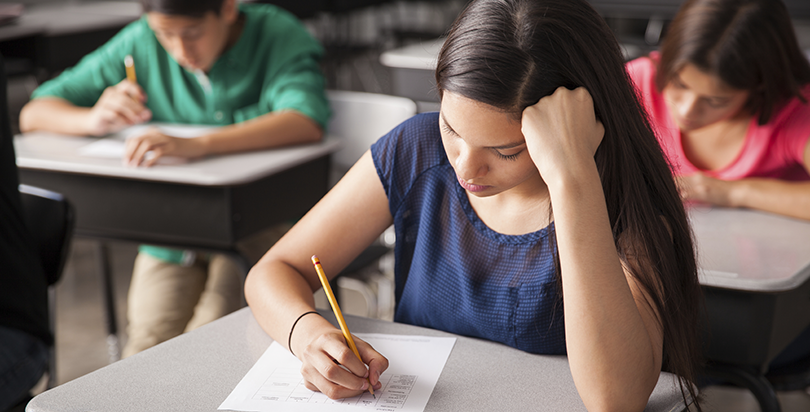 The mantra for Common Core has always been about high standards and raising the bar. In the abstract, virtually everyone supports the notion.

But in practice things get tricky.

To supporters, tough graduation requirements are necessary to encourage student effort and ensure a diploma “means something.” Some have even pushed for requiring students to demonstrate “college and career readiness” in order to graduate.

But decades of research now show that exit exams have not really raised standards, and have actually harmed disadvantaged students.

Now, as states reassess the pairing of graduation tests and Common Core, some are scaling back on the use of tough tests as a requirement for a high school diploma — perhaps an unintended, but welcome result of the the Common Core.

The idea of exit exams began in the '70s as tests of basic eighth-grade-level skills. More rigorous exit exams became popular with the growth of standards-based reform in the '90s, which led many states to adopt academic content standards, tests aligned to those standards, and tools for holding schools, teachers, and students accountable for performance.

(Standards-based reform is most commonly associated with No Child Left Behind, though the law itself did not require exit exams.)

Proponents believed that the tests would push students to work harder and ensure that a high school diploma “meant something” to colleges and employers, at a time when more and more students obtained one.

By 2012, 25 states, accounting for 70 percent of all students, had some form of a high school graduation test.

The difficulty of passing such a test varies significantly from state to state, with a few administering only a low-level “minimum competency” exam and others setting a high bar that many students have trouble attaining. Some states require a single comprehensive test; others demand a battery of subject-specific ones.

The enterprise has been complicated by the introduction of the Common Core standards, and the tests connected to them. In most states, far fewer students were rated “proficient” on the Common Core–aligned tests than on the old assessments, which was by design — the standards were raised to better indicate “college and career readiness.” New York for example saw less than a third of students meet the new proficiency bar, down from around half.

But if states enforced similarly stringent requirements for exit exams, graduation rates — now over 80 percent nationally — would plummet and political outrage would ensue. Some even predicted that the high school dropout rate might double.

It didn’t, however, because states did the only sensible thing: they lowered the bar in one way or another.

In New York, the state phased in Common Core–aligned Regents exams while allowing students to graduate by taking the old tests. The high school classes of 2017–21 will be allowed to graduate by scoring just “partially proficient” on the Common Core assessments. The class of 2022 and beyond must score “proficient” — at least that’s what the state says now, several years out.

California took a different tact. Instead of adopting a new high school graduation test aligned with the Common Core, the state simply scrapped the old test altogether, and even retroactively awarded diplomas to students who had failed it but met other requirements for graduation.

California is not alone: Arizona and South Carolina among others have dropped their exams altogether. Some of these states may have simply wanted to avoid the hassle of creating a new graduation test tied to the new standards.

By raising standards so high, some states have actually lowered the bar to graduate

Other states are grappling with the same issues and coming to different answers. Pennsylvania delayed its graduation exam requirement for two years. Alabama adopted an “end of course” exam, an increasingly common alternative which students must take after completing a high school class. Similar to a final exam, the test counts towards students’ grades, but they don’t have to get a specific score to pass.

Notably a few states that have not adopted the Common Core have also moved away from exit exams, suggesting that some of the shifts on graduation tests may have come about regardless of the new standards. Alaska recently repealed its graduation test, while Texas reduced the number of required tests from five to three.

Just 17 states required exit exams for this year’s graduating class1 — a significant drop from the 25 states in 2012 — according to Jennifer Zinth of the Education Commission of the States, which tracks policies across the country.

Where the impact of tougher standards may have been felt most severely is with the GED test, taken by those who didn’t earn a high school diploma. The General Educational Development certification that the test-taker has high school-level academic skills has become much tougher to attain since the test was aligned to the Common Core. Pass rates have plummeted, with many worrying that this will leave disadvantaged students in a lurch.

The argument for exit exams is that they will push students to work harder, and ensure a diploma is not devalued in the job market. Remarkably, considering how quickly the practice spread, there is virtually no evidence that these benefits have come to pass — and a host of research shows negative effects of the policy.

Several studies have found that graduation tests increase dropout rates, particularly among low-income students of color. Meanwhile, studies have generally shown that the tests have not increased achievement or adult income for graduates. One study even found that exit exams led to higher rates of incarceration. Careful reviews of the evidence have similarly found few benefits to the policy but significant harms for certain students.

Sean Reardon, a Stanford professor, said in an email, “There is a general consensus in the research that high school exit exams increase dropout rates, [but] there is little or no evidence that they improve achievement or raise wages of students following high school.”

Exit exams are also fairly expensive to implement. One report showed the cost often surprised states and amounted to hundreds of dollars per tested student.

But how “expensive” should they really be? The research to date suggests that creating even a moderately high standard for a high school degree is likely to harm already at-risk students. Policymakers hoping to improve the aptitude of high school graduates need to start considering other options; simply mandating a certain standard for graduation won’t ensure students can reach that standard.

Complaints about the Common Core have been dominated by its alleged connection to “high-stakes tests.” Most of these complaints concern how teachers are evaluated based on student test scores.

Much less discussion, though, at least among national commentators, has focused on the stakes for students.

It’s clear that high-school exit exams have very high stakes indeed. One study showed that when teachers manipulated scores to help students pass New York’s exit exams, many got a diploma who otherwise wouldn’t have.

Those who fail such exams — disproportionately poor students of color — likely face diminished job prospects and higher risks of incarceration.

It might have been expected that the Common Core, with its higher standards and lower proficiency rates, would have exacerbated this issue. Paradoxically, though, it may have done the opposite: by raising the bar so high, some states have dumped exit exams altogether, while others have delayed them or adopted alternatives.

In other words, the unintended consequence of the Common Core may have been to lower the bar to graduate — and research suggests that this was a good thing.

1. This does not count states that require students to pass a civics test to graduate, a policy that is increasingly common. (back to story)