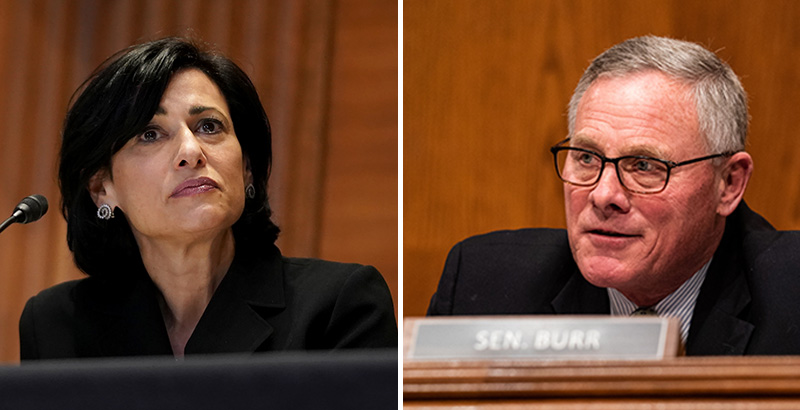 Leading Republicans on the Senate education committee are calling on the head of the Centers for Disease Control and Prevention to provide details about how much the agency interacted with teachers unions and whether she has been completely forthcoming about their involvement in school reopening guidance.

North Carolina Sen. Richard Burr, ranking member of the committee, and Sen. Susan Collins of Maine, sent a letter to CDC Director Dr. Rochelle Walensky Thursday with a list of questions about why the guidance was delayed from late January to mid-February. The letter asks Walensky to identify all administration personnel, including political appointees who prepared and reviewed her April 22 letter to the committee, and requests a complete list of “stakeholders” the CDC contacted, including parents. The senators want to see all documents and communications between the CDC and union employees or members.

“That your agency would give teachers’ unions privileged access to the agency’s internal decision-making process on an issue as critical as school re-openings is a betrayal of that trust,” they wrote. “That you then would appear to try to avoid Congressional scrutiny by providing incomplete testimony is deeply troubling.”

The letter is the latest example of concerns about political influence over the agency in charge of the nation’s response to the pandemic. During the Trump administration, Democrats investigated whether senior officials were pressuring the CDC, then led by Dr. Robert Redfield, to downplay the threat of the virus. Now, Republicans are questioning whether President Joe Biden’s supporters have interfered with efforts to reopen schools.

The CDC did not respond to requests for comment.

On Feb. 27, The 74 filed a request with the CDC seeking information similar to what the senators want — all documents and communication, such as emails and transcripts of meetings, involving the CDC and any interest groups or individuals consulted in preparing the guidance. The CDC has so far provided internal CDC emails, but not the full list of groups and individuals.

Walensky testified before the committee May 11, saying that the agency sought input from over 50 “consumers.” During that hearing, she said the CDC’s communication with the unions focused on what schools should do if they have immunocompromised teachers.

But emails obtained through the Freedom of Information Act by Americans for Public Trust and Open Fairfax County Schools, a parents’ group in Virginia, show there was extensive email communication between CDC officials and the unions, especially the American Federation of Teachers.

“Your testimony seems – at a minimum incomplete – if not inaccurate,” the letter said. “The email correspondence makes clear that the involvement of the teachers’ unions went well beyond accommodations for high-risk teachers.”

AFT, for example, pushed for language saying the agency could change its guidance if a new variant of COVID-19 was detected.

In a Feb. 11 email to Walensky, as well as White House officials, Kelly Trautner, AFT’s senior director of health issues, suggested: “In the event high community transmission results from a new variant of SARS-CoV-2, a new update of these guidelines may be necessary.” She wrote that the union was concerned that even with safety protocols in place, some schools in “high-density, crumbling infrastructure areas” would not be able to safely reopen.

The final guidance reads: “As more information becomes available, prevention strategies and school guidance may need to be adjusted to new evidence on risk of transmission and effectiveness of prevention in variants that are circulating in the community.”

The Fairfax group said the senators raise important questions and that the public needs to understand why the guidance didn’t always coincide with the studies and recommendations it received from experts, such as the agency recommending 6 feet of social distancing even when research showed 3 feet was still effective in minimizing transmission. The CDC later reduced its recommendation 3 feet, which the AFT initially opposed.

“The draconian guidelines, many of which the CDC has subsequently pulled back from, resulted in slower reopenings in parts of the country that treat such guidance as mandatory, a result that was in alignment with the positions being advanced by the AFT and NEA but which caused real harm to the nation’s school children,” the Fairfax group said.

Following the initial release of the emails May 1, AFT spokesman Oriana Korin issued a statement saying the union was in touch with the CDC on behalf of its members, just as it was during the Trump administration.

“And while we have at times been concerned about their conclusions — as we were initially with the change in classroom physical distancing rules — we respect deeply that the CDC career staff has always taken its responsibility seriously,” she said. “And we appreciate that under Dr. Walensky’s leadership, the CDC welcomes stakeholder feedback, as opposed to ignoring it.”