Research Shows That Charters Do Best for California’s Low-Income and Minority Students. Now Lawmakers There Want to Slow Their Expansion

California’s years-long debate over school choice has taken a decisive turn over the first few months of Gov. Gavin Newsom’s tenure — and the shift has come at the expense of charter schools.

In February, Newsom convened a panel of experts to investigate whether charters siphon funding from school districts. The next month, he signed a law — repeatedly vetoed by the previous governor — establishing greater transparency requirements for the schools and their leaders. All the while, attention-grabbing teacher strikes in Los Angeles and Oakland put the issue of charter growth at the top of the state’s education agenda, alongside teacher pay and school funding.

Now a series of bills is moving through the legislature that could dramatically curtail the charter sector’s growth. The most contentious of the package, Assembly Bill 1505, which would grant local districts greater leeway to reject petitions for new charter schools, has passed the state Assembly and now faces consideration in the state Senate. Others, including a measure to cap the total number of charters in the state, have lost momentum.

In the most recent development, the task force convened by Newsom released a report Friday unanimously recommending that districts be given leeway to factor in “saturation” and demand when considering new charter schools. Newsom and the legislature will now decide whether to implement the panel’s report, which includes majority recommendations to reimburse districts for one year of state tuition loss when a student transfers to a charter school and to strip prospective charters of the right to a second appeal to the state board of education.

In a statement, Myrna Castrejón, president and CEO of the California Charter Schools Association, said the report contained “elements that are deeply concerning and require more work ahead.”

Taken together, education observers have seen the past five months as signs that California’s long period of virtually unchecked charter expansion may be ending. Foes of the privately operated public schools, most notably the state’s teachers unions, would relish the possibility.

But for the students who gain the most from charters, a slowdown or reversal of the sector’s recent growth might not be cause for celebration. Those students, studies show, are disproportionately black, Latino and low-income children from the state’s biggest cities; ironically, they’re also represented by some of the sector’s most prominent critics — including Newsom himself, formerly the mayor of San Francisco.

The lay of the land

To understand how controversial charters are in California, you have to get a sense of just how prominent a feature they are in the state’s education landscape.

According to state data, more than 650,000 kids attend charter schools in California, or roughly 10.5 percent of all pupils in the state. Those numbers are huge in both absolute and relative terms: It is, by far, the largest statewide charter enrollment in the country, larger than the total populations of Wyoming or Vermont; it’s also proportionately larger than the average statewide charter enrollment across the U.S., which is about 6 percent. 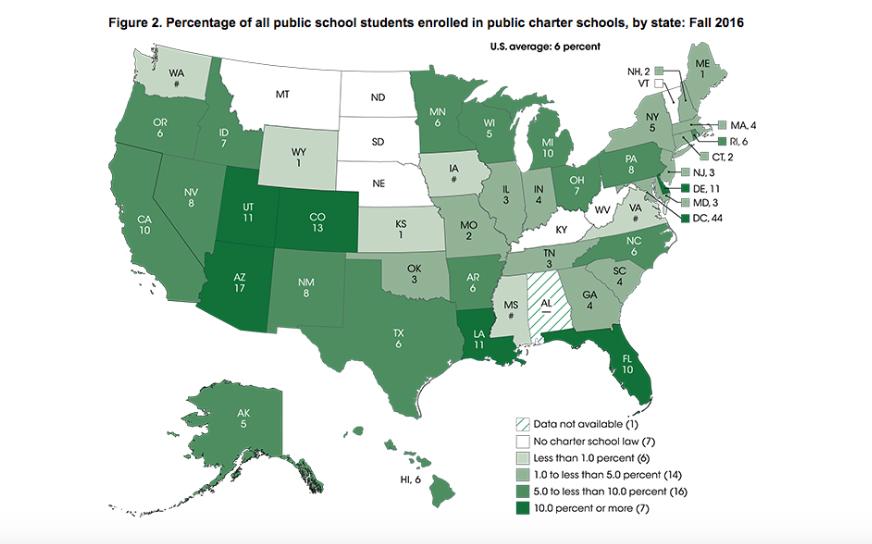 The sector has also reached that impressive scope rather quickly, gaining more than 100,000 new students in just the past five years. That head-snapping pace of expansion came even as California’s total K-12 enrollment saw persistent declines.

In other words: A shrinking pool of enrollees, and the state funding that goes along with them, has put downward pressure on school district budgets at the same time that charters emerged as new competition. In an added wrinkle, California law actually prevents school districts (which authorize the vast majority of charter schools in the state) from rejecting new charter petitions on the basis that they pose a threat to local finances (AB 1505 would revoke that prohibition).

The growing clash for kids and dollars explains why the political battle around the sector has gotten so hot — and expensive.

The past few election cycles have seen record spending from both teachers unions, which adamantly oppose further charter expansion, and the deep-pocketed philanthropists who tend to support it. The money wars erupted again in the 2018 Democratic gubernatorial primary, which pitted charter-friendly former Los Angeles mayor Antonio Villaraigosa against then-Lt. Gov. Gavin Newsom, who won the endorsement of the California Teachers Association. Newsom ultimately raised an unheard-of $58 million on his way to earning his party’s nomination, including $1.2 million in donations from the CTA; once that race was decided, the education-related spending migrated to the race for state superintendent — a largely ceremonial job with little statutory power over charter schools.

California’s Campaign for State Superintendent Costs More Than Most Senate Races. Here’s Why

In that election as well, the union-backed candidate, Tony Thurmond, prevailed over his more reform-oriented opponent. Thurmond, who said during the campaign that he wanted a “pause” on new charter openings, now chairs the commission that released Friday’s report on the impact of charter competition on traditional public schools.

So how good are they?

The increasing focus on charters’ financial effects inevitably leads to the question of their academic effects. But, much the same as with charter schools throughout the country, California’s sector has yielded mixed results.

“The charter sector in California looks like a microcosm of the charter sector nationally,” said Martin West, an education professor at Harvard. “That’s not too surprising, since California charter schools make up a nontrivial segment of the national charter data.”

Indeed, a comprehensive 2014 study from Stanford’s Center for Research on Education Outcomes (CREDO) found that students who attended California charters performed a bit better in reading, and a bit worse in math, than their peers attending traditional public schools. That nuanced picture dovetails with charter performance nationally, which is roughly as good, on average, as the public schools run by local school districts.

Those findings were echoed in CREDO’s 2014 study of Los Angeles charters, released the same year, which found even stronger results for minority students than were measured statewide. In yet another paper, this one released the next year and directed at 41 different urban areas, the research group found that a majority of charter schools in the Bay Area (encompassing the large districts of Oakland, San Francisco and San Jose) outperformed traditional public schools in both reading and math.

In a 2018 research brief intended as an update on previous research, CREDO Director Macke Raymond cast the charter results for traditionally underperforming student groups as evidence that academic improvement can be achieved in every educational setting. In an interview with The 74, she did observe that enough time has passed since the original studies that “[she couldn’t] really tell whether the trends are holding fast or whether they’re changing.”

Still, the existing research base strongly suggests that the primary beneficiaries of charter schools in California are historically disadvantaged populations in big cities like Los Angeles and Oakland. But nowhere have the calls for curbing charter growth been louder than in those very cities, where striking teachers demanded official support for a statewide charter moratorium as a condition of returning to work.

Preston Green, a professor of education at the University of Connecticut, has warned that the lack of tighter regulations has complicated the financial state of small districts, potentially leading to a bifurcated school system resembling that of the Jim Crow South. While he told The 74 that he understands the appeal of charters as an option for black and Latino families, he also said that he supported a temporary moratorium on new charters.

“We really need to think systematically about how to permit charter schools to exist in a way that won’t deleteriously impact school districts,” he said. “So understand that when I’m calling for a moratorium, I’m not calling for a backdoor closure but, rather, really thinking deliberately about how they can exist and be situated in a way that their inefficiencies are lessened.”

Harvard’s West, who examined California’s charter authorizing practices in a paper last year, found that local districts often struggle to act as truly capable authorizers for charter schools — a deficiency made worse by the meager funding provided by the state to act in that role. But although greater resources and oversight might improve the sector’s performance, he told The 74 that such proposals have been absent from the debate raging in Sacramento.

“That’s a different set of issues … animating the debate in California at the moment. It seems to me that in California, you’re seeing a much more concerted attempt to prevent charter expansion, at least in districts that don’t welcome it, by empowering districts to deny new charter petitions. More than anything else, that’s what’s going on here.”

CREDO’s Raymond, while lamenting that the data on California’s charter sector isn’t more current, called for more reliance on data during the policy-making progress.

“I’ve spent 25 years studying what happens when monopolies face competition — and I’m on the record here — I’ve never seen any other industry that allows the monopolist to determine the fate of the new entrant.”