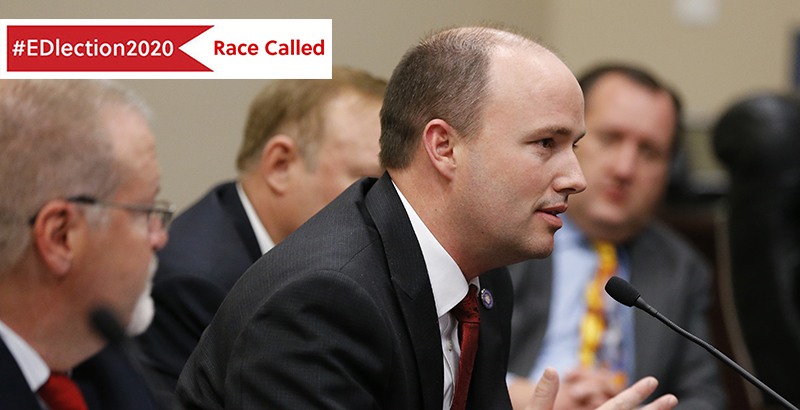 Utah Lt. Gov. Spencer Cox, a Republican who made education and boosting school funding a core tenet of his campaign for governor, claimed victory Tuesday night.

Cox, who’d been pegged to win in pre-election polling, held 63.7 percent of the vote as of early Wednesday morning, with Democratic opponent Chris Peterson, a University of Utah law professor, at 30.8 percent. Republicans have led the state for nearly four decades.

In an acceptance speech late Tuesday, Cox, 45, called for unity and made a special appeal to the state’s younger population, whom he fears the party is “losing” amid deepening partisan divides.

Utah has ranked last in the nation for per-pupil spending for more than two decades. Cox has said it is “absolutely critical that education funding is our first and foremost priority,” noting on his campaign website that “additional resources mean better teachers, smaller class sizes and more prepared students.”

In line with that thinking, Cox backed Amendment G on this year’s ballot to use income tax money on services “to support children and to support individuals with a disability.” He’s also in favor of more technical education investments, higher teacher pay and expanding access to broadband Internet in rural parts of the state.

Reopening planning from late summer suggests most school districts in Utah assumed some form of in-person learning in the fall — but reopening hasn’t been seamless. One high school in September reported 90 cases within two weeks, according to The New York Times.

Cox, in a break from more conservative Republicans and President Donald Trump who have downplayed the virus, has encouraged the public to socially distance and wear masks. As the head of the state’s coronavirus task force early on, Cox drew heat from more conservative candidates who decried “a loss of civil liberties caused by government mandates.”