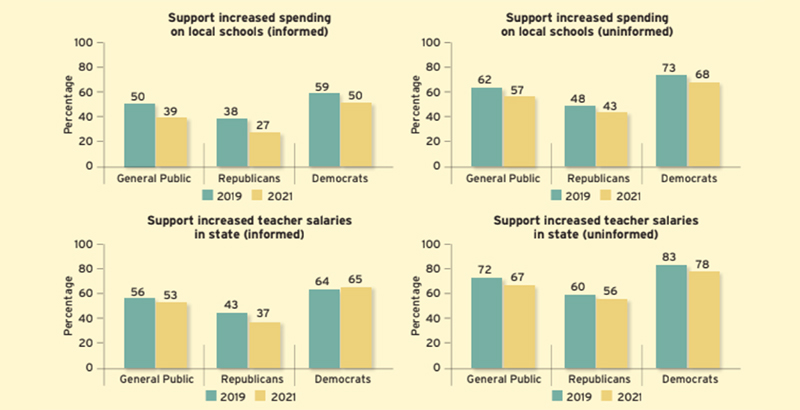 In its first public opinion poll on education policy since the start of the pandemic, the journal Education Next finds that support for a number of highly visible school reforms is flagging. Between 2019, the last time the survey was conducted, and this past spring, backing for increased school spending, academic standards, public charter schools and most forms of vouchers fell by statistically significant increments.

“The public seems tired of disruption, change and uncertainty,” the journal said. “All in all, the public appears to be calling for a return to the status quo.”

The softening support this year spans the political spectrum, though — as in most years — respondents overwhelmingly looked more favorably on their own schools than on education at the national level. In its 15th year, the EdNext poll also found stronger support falling along lines of political affiliation among lawmakers.

Following up on a spring 2020 canvass of families, the journal also surveyed more than 2,000 parents among the 3,156 adult respondents to learn their views on student safety, the likelihood they will have their children vaccinated when they are able and their satisfaction with their children’s experience in the 2020-21 academic year. Slightly more than half, 51 percent, plan to have their kids inoculated, while 34 percent say they will probably or definitely not.

Black and Latino parents are more likely to seek vaccinations for their children than white families, Democrats more likely than Republicans and homeschoolers least likely, at just 32 percent.

Two-thirds of parents surveyed want an online option for their high school-aged child, as do 48 percent of families with elementary pupils. Mask-wearing is favored by 47 percent, while 35 percent are opposed.

On the policy issues, the pollsters posed questions in a variety of ways to probe whether the interviewer’s framing changed respondents’ answers. Writing in the journal’s winter 2022 issue, researchers Michael B. Henderson, David M. Houston, Paul E. Peterson and Martin R. West found a change of 5 points or more to be statistically significant.

While overall support for increased school spending fell significantly, it plunged by 11 percentage points, from 50 to 39 percent, among respondents who were told their local district’s current per-pupil expenditure. Among those asked without that context, the number favoring increased spending fell from 62 to 57 percent.

Overall backing for charter schools fell 7 points, from 48 to 41 percent. As in past polls, support is much stronger among Republicans than Democrats, at 52 percent and 33 percent respectively. 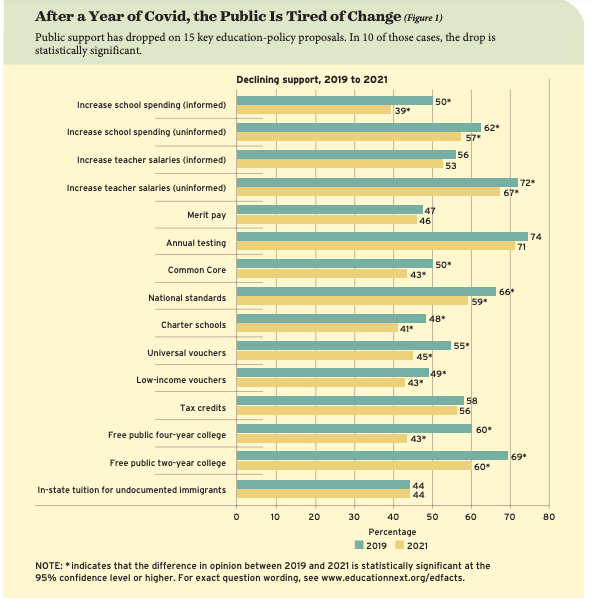 More than half, 55 percent, of respondents gave their local public schools a grade of A or B — down from a 2019 peak of almost 60 percent but well above the 40 percent who gave these high grades in 2008. In contrast, just 23 percent of those surveyed this year gave As or Bs to public schools across the country.

All groups were much more likely to say the nation’s schools deserve neither an A or a B, with just 24 percent of Blacks and 18 percent of whites assigning top honors. At 59 percent, the number of Democrats giving local schools an A or a B remained the same between 2019 and 2021, while Republican support fell from 62 percent to 51 percent.

The number in favor of private school vouchers for all students fell sharply over 2019, from 55 percent to 45 percent, though less so for publicly funded scholarships for low-income students, which fell from 49 percent to 43 percent. 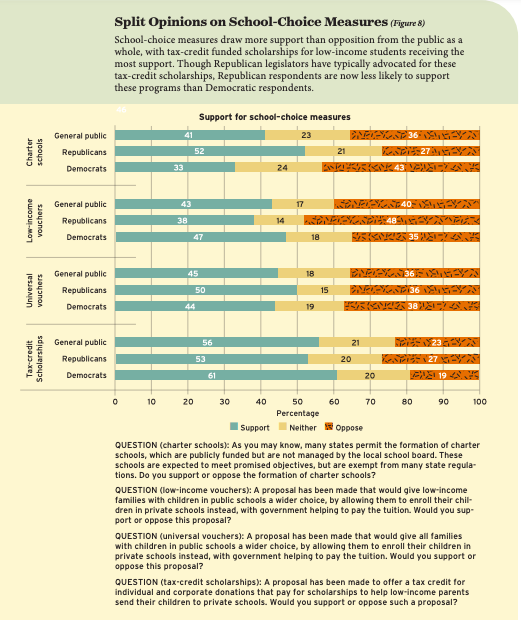 Support for tax credit vouchers, where businesses and others receive tax credits for donating to private school scholarship programs, gained traction with Democrats, with support increasing from 56 to 61 percent between 2019 and 2021. The idea lost ground among Republicans, meanwhile, with backing declining from 65 to 53 percent. The researchers speculated that the partisan reversal might in part reflect President Joe Biden’s success at persuading Congress to pass expanded tax credits for families with children.

In terms of whether teacher unions helped or hindered efforts to reopening schools during the first 18 months of the pandemic, the public “seems reluctant to draw strong conclusions,” the pollsters say. Half of Americans say unions made it neither easier nor harder to reopen schools.

Still, just 15 percent of survey takers say that unions made it easier for local schools to reopen, while 35 percent say they made it harder. Nationwide, 48 percent of respondents say unions made school reopenings harder.

Seventy-two percent of Democrats and Republicans alike back statewide testing of students in grades 3 through 8 and again in high school.

The differences in the public’s and policymakers’ appetites for change should give education advocates across the ideological spectrum food for thought, the researchers say. “In the political sphere, expectations for large-scale innovation are running high,” they note.