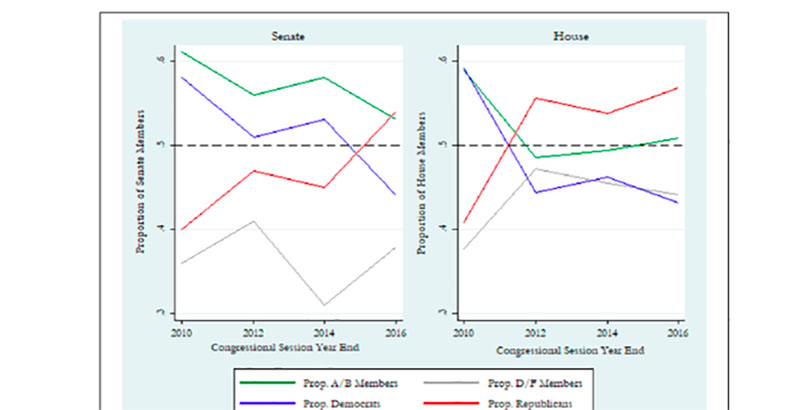 New research suggests that the National Education Association, the largest labor union in the country and a forceful advocate for public school teachers in national politics, has successfully cultivated new Republican allies in Congress over the last decade. The study found that even as the group’s traditional Democratic allies have suffered reversals at the ballot box, their influence over education policy remained unmatched throughout the Obama era.

University of Southern California scholar Bradley Marianno studied voting patterns from the United States Senate and House of Representatives between the 2009-10 and 2015-16 sessions, as well as campaign contributions from both the NEA and its ideological opponents in the business and school choice sectors. During the period he studied, the union took public positions on 148 combined roll call votes and issued letter grades to legislators based on their education stances and accessibility to NEA members.

Lawmakers who received A or B grades — often Democrats, though not always — were categorized as NEA allies, while those receiving D or F grades were seen as adversaries. The Obama era, during which Democrats gradually lost control over both houses of Congress but NEA allies typically constituted a majority in each, provide an illustration of the diminishing overlap between the two groups. 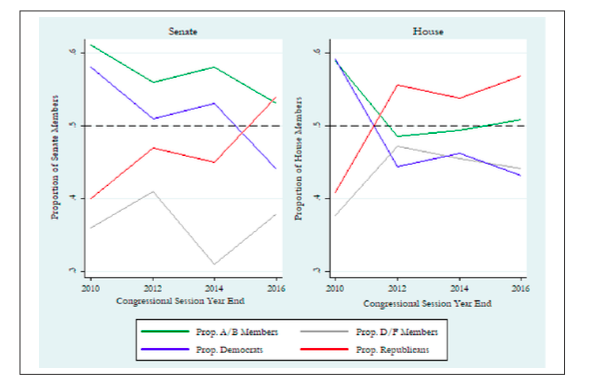 While the number of Senate Democrats declined from a peak of 60 in 2009 to just 46 in 2016, senators who received A or B grades actually never fell below 50 votes during that time. While NEA allies briefly slipped below the 50 percent margin in the House following the 2010 wave that transferred control from Democrats to Republicans (notice that members receiving D or F grades skyrocketed around the same time), the union gradually reassembled a bipartisan majority over the next four years.

The 2010 and 2014 midterm elections did install Republicans in influential positions in Congress. And while the GOP is generally perceived as hostile to many of the priorities most deeply held by teachers unions, disagreements over school choice and funding have generally not stood in the way of a budding, albeit unwieldy, alliance between the two strange bedfellows.

Critically, both congressional Republicans and many union members both opposed much of the Obama administration’s education agenda, especially its emphasis on a strong federal role in education governance. The NEA particularly objected to Obama’s Race to the Top initiative, which incentivized states to implement more rigorous academic standards and teacher evaluation systems. While the president remained enormously popular with the NEA rank and file, the group nevertheless called on Education Secretary Arne Duncan — a close Obama ally — to resign.

Later fights over Title I funding helped solidify ties between unions and the conservatives, with Republicans claiming that Obama’s plan to direct more money to poor schools represented intolerable federal overreach and the NEA arguing that it posed a threat to their contracts. As the No Child Left Behind era gave way to the passage of the Every Student Succeeds Act, unions and Republicans alike trumpeted the cause of local control over education. In 2014, new NEA President Lily Eskelsen Garcia began publicly reconsidering the group’s single-minded allegiance to Democrats.

That ambivalence is borne out in political activity, particularly at the local level. Most famously, political observers were shocked earlier this year when the NEA’s affiliate in New Jersey spent millions in an unlikely attempt to defeat Democratic State Senate President Steve Sweeney, who had angered the union by opening the door to reductions in retirement benefits for state employees.

While Marianno notes that the NEA never donates to defeat a Democratic ally in Congress, it has stepped up its rewards to Republicans who vote favorably.

The impact of this active campaign work can be seen in congressional votes on matters important to the union. Its “success rate” in roll call votes actually increased, from 41 percent in 2014 to 63 percent in 2016, even as the ideological complexion of the House was not altered.