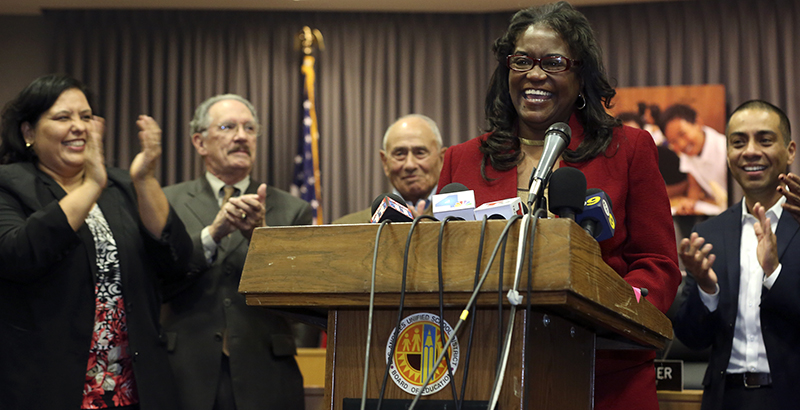 Michelle King, 2nd from right, is all smiles after being introduced as the new Superintendent at LAUSD headquarters in downtown Los Angeles on Jan. 11, 2016. (Mel Melcon/Los Angeles Times)

Michelle King, who, as the first female African-American superintendent of the Los Angeles Unified School District, championed unity and collaboration among all public schools, has died of cancer at age 57.

King was “a collaborative and innovative leader who broke down barriers to create more equitable opportunities for every student,” the district stated Saturday in announcing her death.

Just weeks after her January 2016 appointment, King told a crowd of about 700 parents, teachers, and principals at a town hall meeting that from the moment she was named, she wanted to find ways to share best practices among educators in traditional district schools, independent charter schools, and the district’s innovative magnet and pilot schools.

“We are all L.A. Unified school students,” she said. “It is unfortunate we have labels, saying that this one is better than that one. It’s not us versus them.”

She announced she was meeting with charter school leaders to plan a forum to share strategies. “I can’t do it alone. We need your help. We need all of us breaking down walls and barriers on behalf of kids and be working together. It doesn’t help to have battles over property.”

Four months later, her “Promising Practices” forum was sold out in advance and brought praise for King from charter leaders.

“I’m so excited about what Michelle King is doing, because for the first time since I was on the board, we have a superintendent who is saying, ‘Hey, we can learn from each other,’” Caprice Young, then-CEO of Magnolia Public Schools and a former L.A. Unified school board member, said at the forum at Sonia Sotomayor Learning Academies in Cypress Park.

Young tweeted Saturday, “So very sorry she is gone. Not enough time to make the difference we all knew she could.”

So very sorry she is gone. Not enough time to make the difference we all knew she could. https://t.co/BBJtws2bS6

King announced a year ago that she was being treated for cancer and would retire at the end of the 2017-18 school year. She went on medical leave in September 2017 after feeling weak during a long school board meeting.

In a fall 2016 interview, King described herself as a district “lifer.” She spent her entire career in the district and attended its schools, even working as a teacher’s aide while a student at Pacific Palisades High School.

When she was promoted to superintendent, she said, “I want to be a role model for students who look like me.”

King was L.A. Unified’s first female superintendent in 80 years. But she said she didn’t always aspire to that role. “It’s something that just kind of evolved,” she said.

King grew up in a largely middle-class and African-American neighborhood of South Los Angeles.

After graduating from UCLA, majoring in biology, she taught science and math at Porter Middle School in Granada Hills.

She was promoted to a coordinator for the math, science, and aerospace magnet at Wright Middle School in Westchester and then served as assistant principal and principal at Hamilton High School in Cheviot Hills.

She then joined the ranks of L.A. Unified administrators as head of the division of student health and human services, interim chief instructional officer for secondary education, and superintendent of a western and southwestern region of the district.

She was chosen by Superintendent Ramon Cortines to be his chief of staff. She served as deputy superintendent under John Deasy and was named chief deputy by Cortines in October 2014, when Cortines came back to the district to replace Deasy when he resigned under pressure.

As she moved up the ladder, she said, people began asking her if she had thought about becoming superintendent. Once her daughters graduated from school, she gave it more serious thought, though she imagined she might have to leave L.A. Unified to do so.

“I was as shocked as everyone,” she said of being the board’s pick.

In her first year as superintendent, King visited about 100 schools on a “listen and learn” tour to hear from students, teachers, and parents. 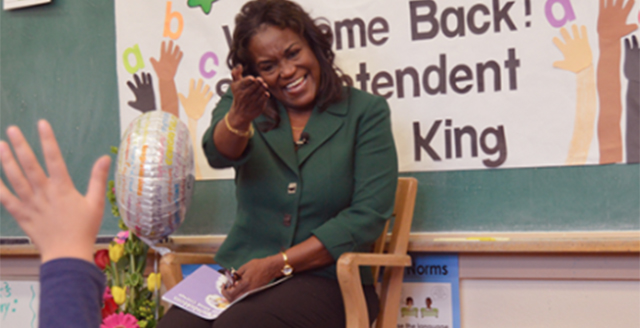 On school visits, she was treated like a rock star, as students and staff asked to take selfies with her.

Steve Zimmer, who was then president of the school board, told King eight months into her tenure that teachers had more confidence in her than in any other superintendent he had worked with in his 17 years in the district.

“You inspire trust amongst our ranks,” Zimmer said.

King’s commitment to collaboration was seen in her joint announcement in September 2016 with Myrna Castrejón, who was executive director of Great Public Schools Now, of up to $3.75 million that would be available in grants for high-performing district-run schools. After the teachers union objected to some programs receiving the funds, $1.5 million was spent to expand the programs of two South Los Angeles schools — Diego Rivera Learning Complex Public Service Community School and King/Drew Magnet High School of Medicine and Science. Both have had long waiting lists.

Castrejón said when the grants were announced that replicating high-performing schools had not been attempted in Los Angeles before or anywhere in the nation at the same scale. She said the grants were possible after she and Great Schools staff worked with King in a collaborative and open process.

“I am excited about the opportunities to increase the number of high-quality choices for our L.A. Unified families,” King said then. “We have schools in every corner of the district where students are excelling. Investing in these campuses will allow more of our students to attain the knowledge and skills to be successful in college, careers, and in life.”

Castrejón, who is now president and CEO of the California Charter Schools Association, said in a statement Saturday, “I loved working with Michelle King.” She called King “a visionary leader who supported the replication of innovative schools and was focused on finding new ways to best meet the needs of each student. I respected her thoughtfulness and commitment to collaboration as a critical pathway to opening up opportunities for all kids.”

Saving L.A.’s Kids From Failing Schools: Behind the Scenes with Michelle King and Myrna Castrejon

In a 2016 interview, King said she learned that people have to be brought together “to have dialogue and to be in each other’s face to work together to really start to break down some of these walls and barriers.”

“Sometimes in life, we don’t think that certain positions are available to us, particularly if you’re a youth, a minority, that job or that position or that role might not be for you because you don’t see many role models, you don’t see many folks in those positions,” King said. “I feel that the appointment has said to particularly young women that anything is possible.”

At the end of her first community meeting, in March 2016, King said, “I think some of you see the ‘I love LAUSD’ buttons we have on, and that’s what it’s about for me — it’s about being united.”

Interviews and reporting for this article were conducted by Sarah Favot and Mike Szymanski.