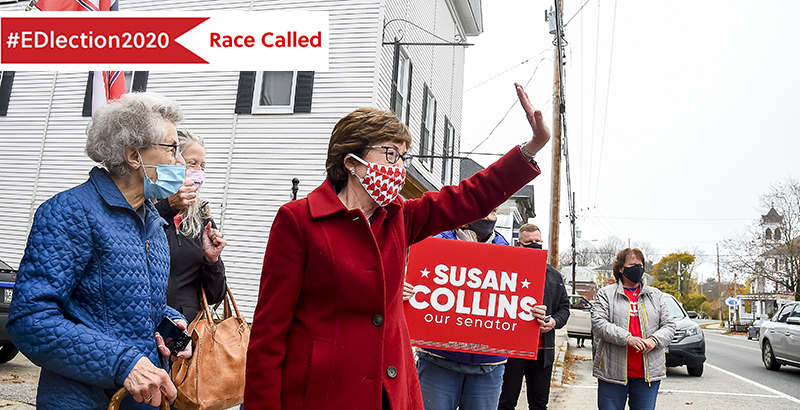 Maine Sen. Susan Collins, a moderate whose seat was widely seen as endangered, won reelection to a fifth term — a crucial victory for Republicans as they seek to retain control of the Senate.

Collins won the race after securing 51 percent of the vote. Her Democratic challenger, Maine House Speaker Sara Gideon, trailed well behind her, coming in second place with 42.5 percent. Before Election Day, polls projected a much closer contest.

Her reelection could have major implications for federal education policy. Beyond being a blow to Democratic hopes of landing the majority, Collins is a member of the Senate education committee. Retiring Sen. Lamar Alexander, Republican of Tennessee, is currently the committee chairman, leaving the position up for grabs among senior GOP members.

“Let me say what an extraordinary honor it is to represent the great state of Maine and to know that I will have the opportunity to serve all of Maine for the next six years,” Collins said during a speech to supporters on Wednesday.

It’s an honor to represent the great state of Maine and to know that I have the opportunity to serve ALL of Maine for the next 6 years. #mepolitics pic.twitter.com/DT6Y4FobaL

Throughout the campaign, Gideon lobbed aggressive attacks on Collins for voting to confirm Supreme Court Justice Brett Kavanaugh, who was accused of sexual misconduct decades ago while in high school. Collins was the only Republican senator to vote against confirming Justice Amy Coney Barrett, arguing that the process was being conducted too close to the election.

In an article entitled, How Susan Collins Survived, The Atlantic reported Wednesday: “Collins ran on her independence, and her seniority. She reminded Mainers that she had delivered billions of dollars to the sparsely populated state over the years, and that if the voters sent her back to the Senate, she could chair the Appropriations Committee, and deliver untold billions more.”