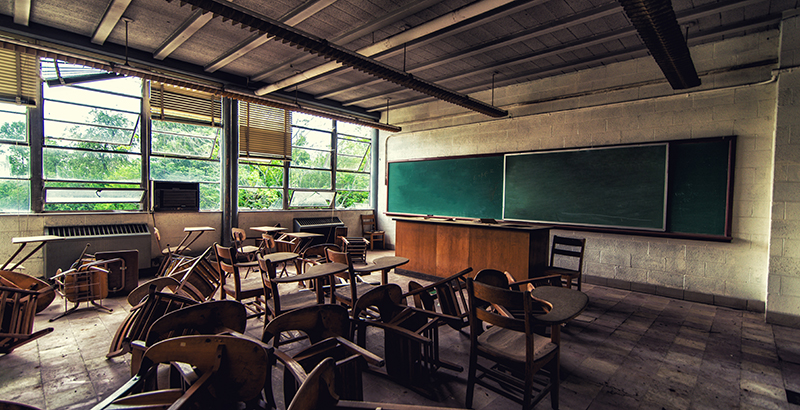 At a ceremony in 2014 to honor Brett Bigham with Oregon’s Teacher of the Year award, he slouched over in his chair — hoping blood wouldn’t seep through his shirt.

Just days earlier, Bigham wrote in a 2018 op-ed, he had endured a brutal beating in his classroom, one that sent him to the hospital. On this occasion, he wrote, a student bit him and whipped him with a television cable. It was far from the first time he endured physical violence or death threats on the job. It wasn’t the first time a classroom injury sent him to the hospital, either.

He’s been bitten, punched and kicked. He was hit over the head with a chair so hard he quit teaching for seven years. 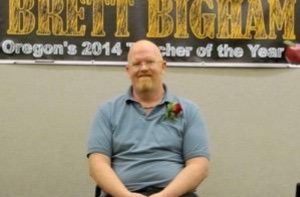 Bigham’s story is likely an extreme example of the challenges special education teachers face as schools struggle to adequately support children with special needs, like those living with significant trauma or other conditions that affect their ability to regulate behavior. But special education teachers from across the country responded to Bigham’s op-ed, saying they too had experienced violence on the job.

During the 2015-16 school year, 10 percent of teachers reported that students had threatened them with injury and 6 percent said they had been physically attacked, according to an April report by the National Center for Education Statistics.

The federal report didn’t include specific data on special education teachers. However, previous research has found that employees in special education classrooms are about three times as likely to be the victim of physical assault as those in general education classrooms. One report, published in 2014 in the Journal of Occupational and Environmental Medicine, found that educators who had faced attacks reported lower levels of job satisfaction and were more likely to consider leaving the teaching profession. As a contentious debate over school discipline plays out in Washington, the federal data show that schools have actually become safer in recent years. But exclusionary discipline, like suspensions, isn’t the answer to solve the situations Bigham faced in the classroom, he said. It’s greater support for special education teachers.

Bigham is currently not teaching full time. He is a self-proclaimed “troublemaker,” and he’s no stranger to conflicts with school administrators. Although his last full-time teaching job ended following an unrelated legal battle, he no longer wants to work in high schools. Bigger kids, he said, hit harder.

Before leaving the teaching profession last year, Dante Fuoco faced similar challenges. For six years, he taught special education in Louisiana, specializing in teaching children with behavioral and emotional instability — though he had no previous experience working with that population.

“They actually saw on my résumé that I was a swimmer and they thought, ‘Well that’s good, that probably means he’s physically strong,’ and they told me that afterwards,” Fuoco told The 74. “Just like, ‘Oh, this is somebody who could actually restrain kids.’”

Fuoco said he was kicked, punched and spit on “hundreds of times.” On one occasion, a student whipped him with a belt and he began to bleed. A school nurse offered Fuoco ice but said there was little more she could do.

For Fuoco, a punch to the throat was the final blow. Burned out by the job’s emotional toll, he quit to pursue a career in acting.

‘The second hit to my head’

Sandra Lewandowski, superintendent of Minnesota’s Intermediate District 287, is well aware of the challenges special education teachers confront on the job. Education leaders in the district, which serves roughly 1,000 children in suburban Minneapolis, have been transparent about the safety concerns educators confront — and have called on state lawmakers to help.

“I don’t want my school district to be known as a dangerous district — that doesn’t help us or it doesn’t help the students,” Lewandowski said. But “what we do need to talk about is students with very intense mental health needs.”

Intermediate District 287 serves some of the highest-needs students in the region, a majority of whom experience trauma stemming from factors like community violence. As a result, special education teachers in the district are frequently confronted by aggressive student outbursts. Last year, more than 300 educators sustained injuries on the job, according to district data.

Oftentimes, Lewandowski said, staff injuries occur when an educator needs to restrain a child who is experiencing emotional dysregulation. Part of the problem, she said, stems from a lack of high-quality mental health services available to students, both in and outside of schools.

“Most of us have dedicated our entire careers to this population of students, and they’re terribly misunderstood. They don’t get the help they need,” she said. “For our kids of color, they often get in the trajectory in the pipeline to prison very quickly. We see that happening, and it’s a tragedy in real time for us.”

After a teacher is injured on the job, Lewandowski said, administrators meet with staff involved because “they don’t want to feel like they’re alone in this work,” and provide time off for recovery if necessary. If educators feel unsafe, they can be reassigned.

Bigham, who has spent the bulk of his career teaching at a district in the Portland suburbs, said he often lacked support from administrators when confronted by a student’s violent outbursts. After an incident in the early 2000s, he took a seven-year hiatus from teaching.

Each day, he said, a student would hit teachers and classroom assistants. After complaining to school leaders and advocating for more help, Bigham was told he could pin the boy to the ground if the child swung at him more than 300 times. Under those conditions, he warned, someone could get seriously injured.

Bigham was working with another student when the boy hit him in the back and the head with a chair. As Bigham fell to the ground, the boy took a second swing. Bigham said he sprung into action when he realized the other student was about to get hit.

“Instead, I wrapped my arms around that kid and I took the second hit to my head,” he said.

After the seven-year break, he found himself back in the special education classroom, and he was soon recognized as Oregon’s Teacher of the Year — the first special education teacher in the state to receive the honor — before his career quickly hit a snag. Bigham was one of the first openly gay educators to receive the recognition nationally and, after he used the platform to confront bullying against LGBT students, the district reportedly retaliated against him and he was fired. In 2015, Bigham settled with the district for $140,000.

Although he’s currently working as a substitute teacher, he hopes to return to the special education classroom full time — this time at an elementary school.

A few years ago, school leaders at Intermediate District 287 realized they needed to do more to support their highest-needs kids. They created a “mobile response team” of psychologists, therapists and behavioral specialists who address critical incidents at schools and coach staff on how to de-escalate violent situations. The district also removed school-based police officers from their campuses “because we don’t want to criminalize mental health,” Lewandowski said.

Violent incidents with students happen “every single day, it’s not a once-a-year kind of experience,” Lewandowski said. “That’s what is so challenging.”

The district is also experimenting with a “therapeutic teaching model” that blends mental health services in some elementary classrooms. Under that model, which was funded through a one-time state grant for nearly $2 million, a full-time therapist works alongside educators with children and another therapist works with students’ families. The district has lobbied the state legislature to make funding for the program permanent.

For Bigham, a bulk of the problem comes down to inadequate staffing — not just with special education teachers, but also among counselors, psychologists and paraprofessionals. For example, the American School Counselor Association recommends a student-to-counselor ratio of 250:1, yet few states meet that goal, with a national ratio of 482:1 — a tally that’s remained relatively stable over the past decade.

Indeed, schools have long faced a special education teacher shortage, according to a 2017 report by the Brookings Institution. The challenges schools face in hiring special education teachers has become more acute in recent years. But there are several strategies districts could use to attract educators to their schools. Among them: cash incentives.

“I get paid the same as all the other teachers, and they’re not getting beat up,” Bigham said. “We are about to have a huge crisis in staffing schools in this country, in special education especially, and this is one of the reasons.”

Such a straightforward solution isn’t so easy, however, because of collective bargaining agreements between districts and teachers unions, said Thomas Dee, an education professor at Stanford University who co-wrote the Brookings report. The failure to compensate special education teachers more, particularly given their violent encounters in the classroom, offers a disincentive for quality teachers to continue educating children with special needs, he said.

“You end up with this cycling of teachers that accelerate,” Dee said. “If teachers are leaving those special education classrooms — as they’re honing their craft and becoming more experienced — just so they can find better working conditions, the kinds of teachers you’ll have with the most needy students are relative novices who haven’t yet mastered their craft.”

Overall, the teacher workforce has increased slightly over that time period, with a student-to-educator ratio of 16 to 1.

Educators serving students with disabilities have long highlighted challenges they face on the job. Special education teachers have cited an overwhelming burden from paperwork, a heavy workload and a lack of support from school management. Bigham said he’s observed each of these challenges over the course of his career.

For Bigham, it’s a simple equation: Pay to adequately support students with disabilities now, he said, or shell out the money on prison sentences later. Fuoco agreed.