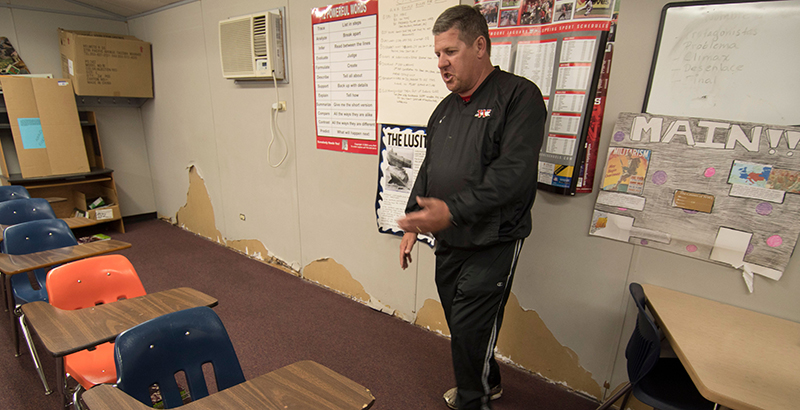 On a day when a dangerous deep freeze settled across wide swaths of America, echoing memories of last year’s cold snap that left children shivering in their classrooms, congressional Democrats introduced a bill to spend $100 billion on improving school infrastructure.

Spending on improvements to schools, congressional Democrats said, should be part of any large-scale infrastructure bill, like the one President Donald Trump has proposed.

“Every day across districts in America, students and educators attend schools that are either unsafe or lack basic resources, or both, and this is simply unacceptable,” Rep. Bobby Scott, the Democratic chairman of the Education and Labor Committee, said at a press conference in Washington.

The bill, dubbed the Rebuild America’s Schools Act, would put $70 billion in grants and $30 billion in bonds toward improving schools, with a priority given to the schools in worst condition and those serving high numbers of low-income students. Funds could also be used for technology upgrades.

President Donald Trump has several times proposed a bipartisan investment in infrastructure to the tune of $1 trillion. He didn’t mention school improvements in his 2018 State of the Union, which advocates considered a missed opportunity; it’s unknown if he’ll address it in next week’s address.

Public schools should be included in any large-scale infrastructure package, Scott said.

“I think it’s very likely if we have an infrastructure bill that this could easily be part of it,” he said.

Members of Congress have introduced more than a dozen school infrastructure upgrade bills in the past 20 years, according to a search of congressional records. Scott introduced a similar $100 billion infrastructure investment bill in 2017.

None of those bills advanced through the legislative process, and past federal infrastructure investments, including the 2009 stimulus, didn’t include schools.

But future projects should, said Sen. Jack Reed, Democrat of Rhode Island, a cosponsor of the bill.

Indeed, crumbling school infrastructure has attracted national headlines, from those shivering children last year to a pattern of neglect that left dangerous levels of lead and asbestos in Philadelphia schools.

Facing a ‘Really Big Issue,’ Senators Push for First Federal Survey of the Condition of U.S. Schools Since 1995

A 2017 study by the American Society of Civil Engineers found that more than half of American schools needed repairs, renovations or modernizations to be considered in “fair condition,” and a 2014 Education Department study estimated that total costs would run $197 million.

The bill also would create a national database on the condition of America’s schools. The last government survey of the condition of schools was in 1996; an amendment added to an earlier version of the Education Department’s 2019 spending bill that would have required a new Government Accountability Office study of the issue wasn’t included in the final version of the law.

The Path to Universal COVID-19 Testing in Schools

Ahead of Broader Reopening, Asks for Clear Transportation Plans

LISTEN: Without Sports, Band or Drama, How to Keep Students Engaged? New EWA Podcast Spotlights 74 Contributor Greg Toppo on the Risk of Kids Losing Interest — and Dropping Out

After Walking Out and Sitting In, Student Activists File Civil Rights Complaint Against Selective Admissions at NYC Schools

Trump Mulls Parting Shot on Private Schools, but Experts Dismiss Possible Executive Order as ‘More Bluster for the Base’

From School Board to the White House, Gwinnett County’s Vote Falls Under National Microscope

Four New Members to D.C. State Board of Education Appear Set; Will be Advisors on School Reopenings to Student Literacy as Pandemic Continues

After a Costly Campaign, Charter- and Union-Backed Candidates Each Win Seat on L.A. Unified School Board

Arizona Teachers Took Their Case for Better Funding to Voters. A Tax on High Earners that Could Raise $1B Is Poised to Pass

What We Know About the Youth Vote So Far: In 11 Key States, Early Data Suggest a Turnout Surge Among Young Americans