Gov. Hickenlooper on School Safety — and Fear: ‘If You Wanted to Hurt America, What Better Way Than to Make Children Feel They’re Unsafe In School?’ 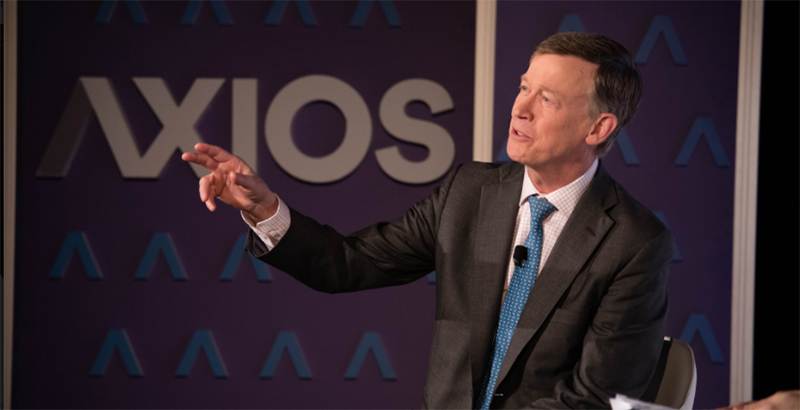 This morning, The 74 partnered with Axios and the Walton Family Foundation to organize a special #EDlection2018 town hall in Washington, D.C. Here’s our recap of how the event trended on Twitter; we’ll be publishing several videos, audio interviews, and recaps in the days to come.

An early headline to emerge from the event was Hickenlooper’s response to the recent school shooting in Florida — and his passionate plea that America’s children not be forced to live in fear.

“We are allowing ourselves to be terrorized,” he said. “If you were someone in a basement in Leningrad and you wanted to hurt America as badly as you could, what better way than to make our children feel that they’re unsafe in school?

That they shouldn’t go to school?

That while they’re at school, they’re [forced to be] anxious?

They won’t learn as well, you’ll cripple a whole generation. We’re allowing this to be done to ourselves.”

He continued: “Even with universal background checks, even with all kinds of restraints, security people will make mistakes. Having guns so available to so many people makes the task of keeping schools safe almost impossible.”

We’ll soon be posting the full interview with Hickenlooper, as well as Allen’s conversations with other governors. Get notified when the interview goes live by signing up for The 74 Newsletter.

Meanwhile, here’s the transcript of this morning’s exchange on guns and school safety:

Allen: What would you tell President Trump about proposal to arm teachers?

Hickenlooper: I think he’s heard enough in the last 24 hours; I probably don’t need to say anything.

Honestly, when I went to all those schools [in Denver while I was mayor], even back then, people were discussing whether to arm. Ever since Columbine, which was 1999, this has been an issue. I have met a few teachers that thought that was a good idea [to carry guns], would do it. Almost every teacher thought it was a terrible idea. They thought it would make schools less safe.

You’d have to train teachers about things they don’t want to learn about.

In terms of gun safety, Trump wants to ban bump stocks. Let’s get to work, right? They could raise the age everywhere for kids to be able to own an assault weapon. That’s a first step toward making sure assault weapons are pulled out.

What have you learned for modern Democrats about how to navigate gun control?

Part of the problem is a reflection of the continued divide between rural America and urban, suburban America … I think we’ve got to fix it.

Anybody who lives in an urban area and thinks that they’re not dependent on where their food comes from is crazy. We don’t oftentimes do a good enough job in urban areas going out and getting involved in the rural parts of the state, representing those self-interests and making sure that if people get a real chance … to be appreciated. I think we’ve put in a lot of time over the last six or seven years of going out and trying to listen harder. If you want to persuade someone how to think about an issue differently, don’t tell them why you think they’re wrong. I think better to just keep asking [questions].

Tell us about the tipping point.

I’ve had people in my office in the last few days that are so fed up, and a couple of them are Republicans, conservative people, saying: Enough is enough, I’m going to put my dollars toward electing people that will enact reasonable, thoughtful gun safety measures. That process of having it stop being so partisan and just get down to the basic concept.

We are allowing ourselves to be terrorized. If you were someone in a basement in Leningrad and you wanted to hurt America as badly as you could, what better way than to make our children feel that they’re unsafe in school?

That they shouldn’t go to school?

That while they’re at school, they’re [forced to be] anxious?

They won’t learn as well, you’ll cripple a whole generation. We’re allowing this to be done to ourselves.

Follow all the updates from the #Axios360 town hall — and see our latest #EDlection2018 coverage: Sign up for The 74 Newsletter.