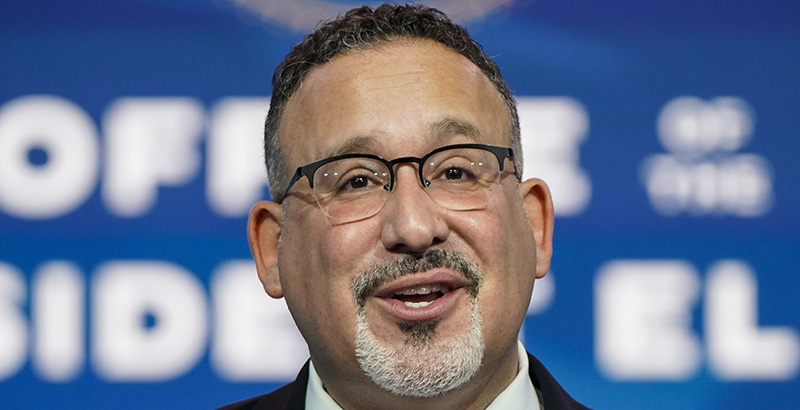 As keynote speaker at the National Charter School Conference, U.S. Education Secretary Miguel Cardona made the case to school leaders on Tuesday that building a diverse teaching force should be a key component of pandemic recovery efforts.

It was the first time Cardona had spoken directly to the charter school community since assuming his role as secretary, and he took the occasion to remark on how the White House is working to bolster the pipeline for more Black, Hispanic, Indigenous and Asian educators to enter the workforce — and how charter leaders can help that effort.

The American Families Plan, part three of President Biden’s “Build Back Better” agenda, allocates $9 billion to help schools recover from the pandemic, said the secretary, including money earmarked for educator training scholarships at historically Black colleges and universities, grow-your-own paid teacher residency programs and other strategies to recruit and train teachers of color.

“These investments will provide a critical pipeline of well-prepared and diverse educators to students all across America,” said Cardona.

Charter schools already outpace traditional schools in their proportion of teachers of color on staff. The secretary’s remarks were pre-recorded and there was no opportunity for audience members to ask questions or interact.

While Cardona himself is seen as more neutral toward charter schools, his boss’s recent relationship with them has been divisive. While President Biden served as vice president during the Obama administration, which was highly supportive of charter schools, he then adopted a more skeptical stance during his 2020 presidential campaign when he promised to end federal funding of for-profit charter schools. In May, he became the first president since the federal charter school law was passed in the 1990s not to issue a proclamation recognizing the publicly funded independently run schools during National Charter Schools Week.

The National Alliance for Public Charter Schools, however, read the secretary’s remarks as something of an olive branch. “We are thrilled that Secretary Cardona took time out of his busy schedule and made a point to talk to charter school teachers and leaders today. His appearance alone sends a strong signal,” Nina Rees, president and CEO of the Alliance wrote in an email to The 74. “Obviously, we would love to know more, but believe the Secretary to be sincere in his commitment to serving the interests of all kids — regardless of the type of school they attend.”

On the teacher diversity issue, Cardona said charter school leaders can ensure that the sector continues to make further strides.

“You play an important role in advancing efforts that ensure every child is taught by an outstanding teacher,” he told the audience of charter leaders. “I encourage you to support grow-your-own programs that create a community-based pipeline into the profession by including teaching as part of your career in technical education pathways in secondary schools.”

While research shows that all students benefit from having teachers of color — with students of color experiencing the largest gains — the nation’s teaching corps continues to poorly reflect its students. While over half of K-12 students are Black, Hispanic, Asian or Indigenous, the same is true for only approximately 1 in 5 teachers.

High levels of stress reported by teachers over the course of the pandemic have spurred fears of a national educator shortage, but as of yet those fears have largely not materialized.

The education secretary also issued a warning, expressing concerns over for-profit charter operators, which tend to serve lower proportions of disadvantaged students and have a history of poor performance.

“When it comes to student success, it’s important that we also take steps to ensure greater transparency and accountability in the charter school sector,” said Cardona.

That means “taking active steps to serve students from diverse racial and socio-economic backgrounds, providing meaningful access to instruction for students with disabilities and multilingual learners and assur[ing]… that none of our resources are used to support for-profit operators.”

But despite the stern footnote — delivered with his usual grin — the former Connecticut teacher and principal stressed his appreciation for educators’ efforts over the course of a trying year and closed on a unifying note.

“We can only do this work well if we do it together.”