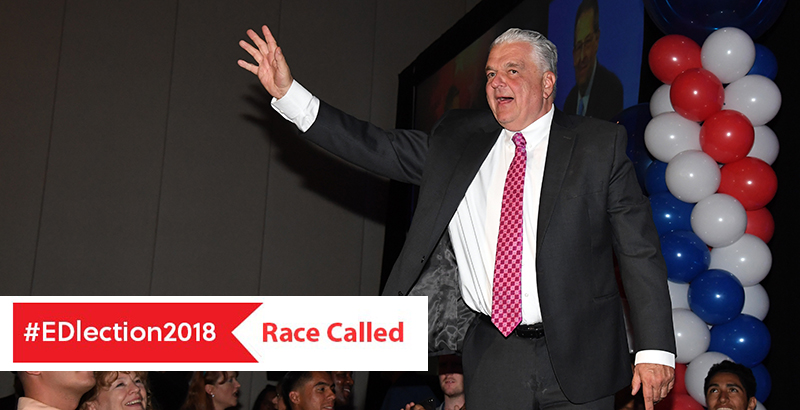 Nevada elected its first Democratic governor in more than two decades, with Steve Sisolak coming out on top Tuesday in the race for the open seat, according to the Las Vegas Review-Journal.

Sisolak secured 49 percent of the vote with 92 percent of precincts reporting, while his Republican challenger, Adam Laxalt, held 45 percent of the vote. Sisolak, who sits on the state Board of Regents, will replace outgoing Republican Gov. Brian Sandoval, who tried unsuccessfully to implement the broadest education saving accounts program in the country. The courts upheld the initiative but the state legislature refused to fund it.

Nevada hasn’t updated its education funding formula for half a century, and with per-pupil spending among the nation’s lowest, Sisolak campaigned on a promise to “modernize” the way the state pays for schools. He aims to convene representatives from across the state to consider funding formula revisions. One way he wants to boost funding is to redirect retail tax on recreational marijuana to education.

Under this plan, Sisolak says he would give teachers raises, reduce class sizes and fight against “the diversion of funding from public schools into private schools.”

“Everything is on the table except for one thing and that’s doing nothing and the status quo, because it’s not working,” he said, according to The Nevada Independent.

Laxalt campaigned on a promise to bolster school choice, including charter schools and education savings accounts.

During his victory speech, Sisolak noted he stands with young undocumented immigrants who received work authorization and deportation relief through the Deferred Action for Childhood Arrivals program. He also gave a shout-out to educators.

“It’s about supporting our teachers who’ve been digging into their own pockets to buy snacks and schools supplies for their students,” he said. “Educators, I’ve got your back.”

“It’s time to stop the petty politics and get things done and that’s what we’re going to do.” @SteveSisolak @SteveSisolak makes his victory speech. Wow. #NVElections @nvdems pic.twitter.com/LfZwWIWkeM