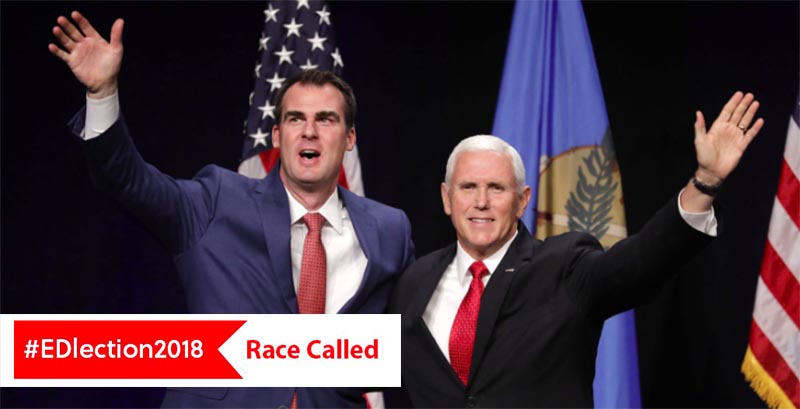 Stitt, an entrepreneur and self-proclaimed political outsider, beat Democrat Drew Edmondson, a former attorney and teacher, 54-42, according to New York Times projections. As recently as Sunday, polls had given Stitt a narrow, 3-point lead.

He will replace term-limited Republican Gov. Mary Fallin, who has the lowest gubernatorial approval rating in the country.

In 2016, 65 percent of Oklahoma voters cast ballots for Donald Trump, and the president endorsed Stitt in August. But Democrats had hoped to turn the state’s governorship blue this year as the #RedForEd teacher movement engulfed the red state.

In April, Oklahoma weathered a nine-day teacher strike protesting low salaries, a switch to four-day school weeks and years of budget shortfalls that have eaten away at public school funding. Teachers got raises of about $6,000 as a result of the #RedForEd movement.

One notable divide between Stitt and Edmondson during the campaign involved a bill to fund teacher salaries through higher taxes on items such as oil and tobacco. Edmondson supported the bill, while Stitt said schools should reallocate part of their property tax revenue to cover their costs instead.

Eight of 19 House Republicans who had opposed that bill lost their primaries earlier this year.