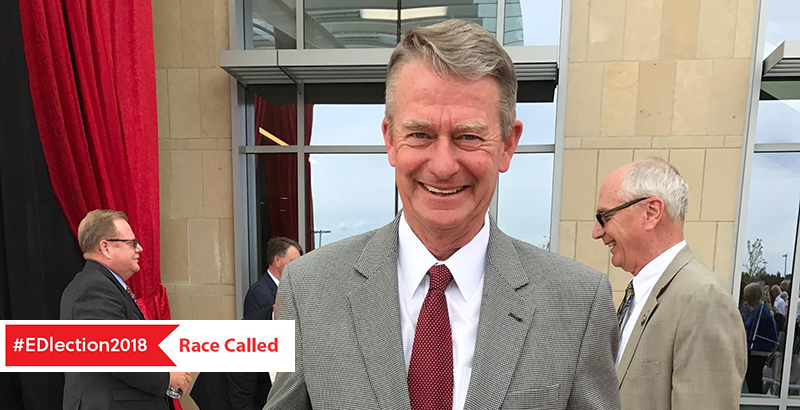 Republican Lt. Gov. Brad Little is projected to be Idaho’s next governor after securing 60 percent of the vote with 99 percent of precincts reporting, NBC reported.

He succeeds retiring Republican Gov. Butch Otter, who has served since 2007.

“Idaho has been fairly successful, but we have more to do in taking back the authority that the federal government over the years has taken, whether it’s in the area of education, transportation, health care, public lands management and all the areas of regulation,” Little said in his victory speech, The Spokesman-Review reported.

Little had led Democratic state Rep. Paulette Jordan by a wide margin in the polls. But Jordan had received widespread national attention as a young progressive who could have been the first Native American in the nation elected governor.

Little supported preparing Idaho students for the workforce through career and technical education and vocational training. He suggested that colleges should be able to keep sales taxes to help reduce tuition costs. And Little proposed raising teacher pay to $40,000 and basing salary increases on students’ academic growth.

Thank you to Snake River Elementary School in #Nampa for hosting me and having me read to these bright minds. #Education is important to me and my education plan makes teachers and students a top priority! #kidsfirst #idpol #idgop #idleg #ourfuture pic.twitter.com/iCD9Xa982Z

During debates, Little and Jordan argued over where Idaho fell in national education rankings; it has been referred to as the “scroll-down state” because finding it on state-comparison lists of early education, school funding, and teacher salaries requires scrolling down to the very end. The candidates also debated how to expand access to early education in one of the few states that does not fund it.

Idaho’s test scores are slightly above the national average, though teacher pay ranks near the bottom. About 8 in 10 students in Idaho graduate from college, a few points below their national peers. The state has 50 charter schools, but moves toward tax-credit scholarships have stalled in the legislature.

“No one would have thought we would have got this far,” she said Tuesday night, according to Local News 8. “No one imagined an Idaho like this. Be proud of yourselves, thank yourselves, because we are here and we got here together.”