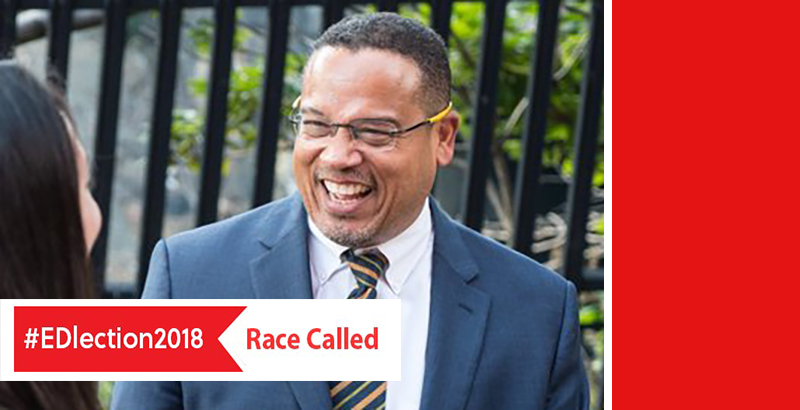 In a race that was undecided until the wee hours, six-term U.S. Rep. Keith Ellison will become Minnesota’s attorney general, beating GOPer Doug Wardlow, a relatively unknown attorney who has made a career of suing school districts and other entities over policies that protect LGBT people.

With all votes counted, according to the Secretary of State’s office, Ellison won with 49 percent of the vote.

Ellison, who gave up a seat in one of the most solidly blue congressional districts in the country to run, was thought to be a shoo-in until August, when an ex-girlfriend alleged he had engaged in “narcissistic abuse.” Ellison denied the allegations and Twin Cities media were unable to substantiate them, but the scandal persisted.

The first Muslim elected to Congress, Ellison has confronted last-minute allegations of wrongdoing in every election since 2012. In addition to domestic abuse, this year mailers and other opposition campaign materials accused the Democratic-Farmer-Labor candidate of supporting “cop killers.”

Two weeks ago, a poll gave Wardlow a 7-point lead over Ellison. The same survey found fewer than half of likely voters knew who Wardlow was, suggesting the margin signaled more about eroding support for Ellison than surging interest in Wardlow.

Wardlow’s testimony fanned a painful flame. Eight years ago the district was named a “suicide contagion” by state health officials after at least seven students killed themselves in the wake of bullying based on their perceived sexual orientation or gender identity. Because of a district policy that prohibited staff from saying anything affirming about homosexuality or gender nonconformity, teachers and others believed they could not intervene in the harassment.