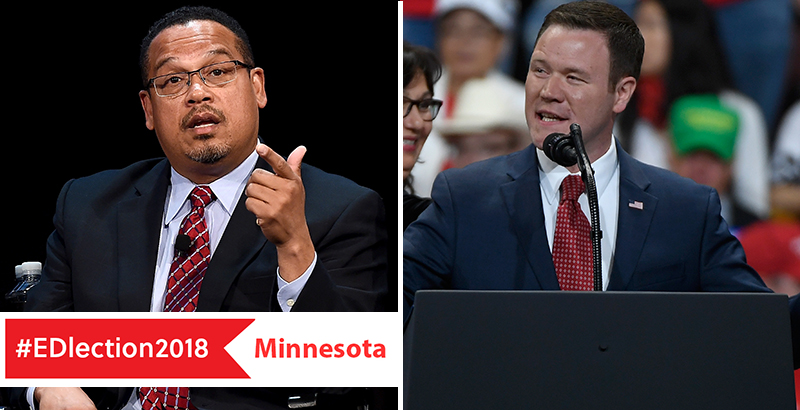 Two weeks before next month’s election, an unexpected twist has left Minnesota with a statewide race in which education may play a pivotal role. Republican Doug Wardlow, the front-runner for attorney general in the latest poll, until recently was a staff attorney for a right-wing organization that has sued school districts over policies protecting transgender students.

In addition to challenging general LGBT protections in a series of “religious liberty” cases, the Alliance Defending Freedom has pursued lawsuits against schools in Minnesota, Illinois, and Ohio, among other places, opposing policies allowing students to use bathrooms and other facilities that correspond to their gender identity.

“The legal landscape has shifted significantly in the last several months in a direction that underscores the strength of student privacy rights and the incoherence of gender-identity policies,” Wardlow wrote in a letter to the Anoka-Hennepin School Board, warning that efforts to “intermingle the sexes” would “open the district to a serious risk of litigation.”

The district had enacted new rules, based on Minnesota Department of Education guidelines, in an attempt to turn the corner on more than a decade of contentious battles with groups associated with former U.S. representative Michele Bachmann and others pushing for “conversion therapy” for LGBT students.

In 2010 and 2011, after eight student suicides attributed to bullying rocked the community, students in the district filed federal civil rights lawsuits complaining that a district “no promo homo” rule — a colloquialism describing school policies that prevent staff from discussing LGBT topics, supposedly because such talk promotes homosexuality — stopped school administrators from enforcing students’ rights and protecting them from violence. Because of the policy, harassment and taunting went unchecked, the student plaintiffs charged.

In 2012, the district settled the main lawsuit by entering into an agreement with the U.S. Departments of Education and Justice in which it committed to an extensive list of changes aimed at altering the climate in the schools. Federal oversight of the settlement lapsed in 2017, the year that incoming U.S. Education Secretary Betsy DeVos proposed rescinding Obama-era guidance on civil rights protections for LGBT students.

Minnesota law does not require gender-neutral bathrooms in schools or other public facilities, but the state Department of Education in 2017 released extensive guidance for schools outlining steps they could take to protect gender-nonconforming students. Over Wardlow’s signature, the alliance sent a letter to every district in the state laying out its opposition to the guidelines and insisting that accommodating students’ preferred personal pronouns violated the free-speech rights of other students.

A relative unknown, Wardlow was considered a long shot for the attorney general seat until last week. A poll conducted in mid-September found six-term Rep. Keith Ellison, the first Muslim elected to Congress, favored over Wardlow for the AG seat 41 percent to 36 percent. But in a reversal, an Oct. 22 survey of 800 likely voters conducted by the Minneapolis Star Tribune and Minnesota Public Radio found Wardlow ahead 43 percent to 36 percent.

Ellison has struggled to shake domestic abuse allegations raised by a former girlfriend, Karen Monahan, who said in August that Ellison had engaged in “narcissistic abuse,” raged against her, and in one instance attempted to pull her off of a bed by the ankle. Monahan provided numerous text messages to Minnesota Public Radio, which characterized them as communications one would expect in a breakup. Ellison, whose ex-wife is a longtime member of the Minneapolis School Board, has denied the allegations.

Wardlow made the news himself earlier this month when he was captured on tape at a GOP fundraiser vowing to “fire 42 Democratic attorneys right off the bat and get Republican attorneys in there” if elected attorney general, MPR reported. He had been running on promises to depoliticize the agency, insisting that as attorney general he would uphold existing laws whether he agreed with them or not.

If Wardlow wins, he will be Minnesota’s first Republican attorney general in 50 years.