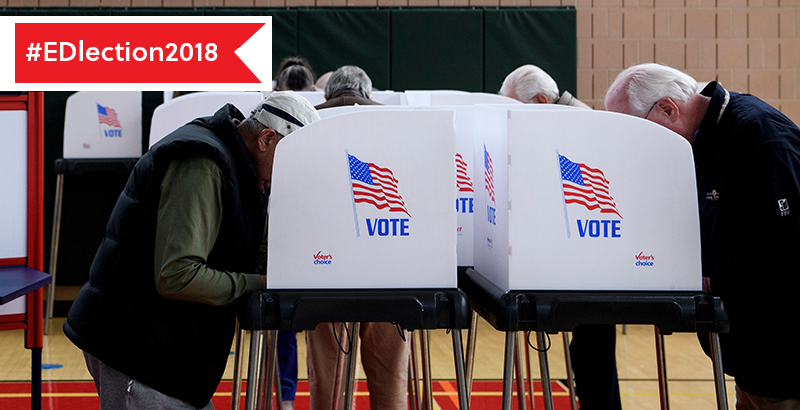 More than 20 hours after the polls officially closed in Georgia and with all precincts reporting, progressive Democrat Stacey Abrams trailed her Republican opponent Brian Kemp Wednesday afternoon by 65,000 votes, out of 4 million cast, but insisted she would not concede the race for governor until all absentee and provisional ballots around the state were counted.

Abrams hopes the ballots will lower Kemp’s total below 50 percent, triggering a runoff required by state law in campaigns when neither candidate captures more than half the vote. Kemp currently leads 50-49. Turnout for the race approached 95 percent of the state’s presidential vote in 2016, according to the Associated Press.

The race slowly tightened overnight but it’s not clear that there are enough uncounted votes to affect Kemp’s lead meaningfully.

Abrams, a former Georgia legislator who is trying to become the nation’s first female African-American state leader, received strong backing from the national party (as well as support from celebrities like Oprah and Will Ferrell) in an effort to register and turn out poor and minority voters — reproducing the model that helped Democrat Doug Jones beat Judge Roy Moore in Alabama last year. Kemp was vigorously backed by President Donald Trump.

During the campaign Abrams emphasized early education and increased school funding. Kemp advocated for more autonomy at the district level. Their platforms fell to the left and right, respectively, of the agenda set by outgoing Gov. Nathan Deal, who tried to consolidate authority over the schools aggressively but to mixed effect.

Kemp, the Georgia secretary of state whose job it is to oversee elections, has faced accusations of conflict of interest and voter suppression. Last month, a federal judge ruled Georgia election officials had to stop rejecting absentee ballots with voters’ signatures that didn’t appear to match signatures on record. Tuesday’s voting was also plagued by long lines and machines with power.

If necessary, a runoff election will be held on December 4.