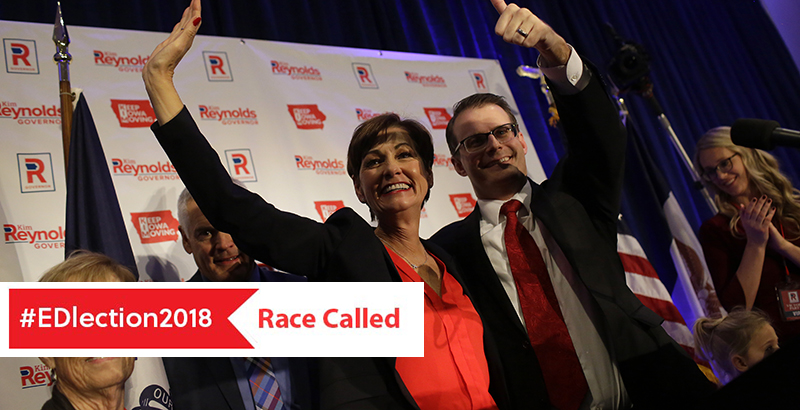 Republican Kim Reynolds became the first female governor to win an election in Iowa’s history, securing 50 percent of the vote, according to The New York Times with 100 percent of precincts reporting.

Reynolds stepped up as governor in 2017 to fill the final year of former Gov. Terry Branstad’s term, after he was appointed U.S. ambassador to China. She ran against Democrat and businessman Fred Hubbell; the two were neck-and-neck during polling.

“This is a place where a small town girl from rural Iowa, daughter of a factory worker and a farmer and a mom who chose to stay home and raise her family could one day become the first female governor of the state of Iowa,” Reynolds said during her victory speech, as reported by the Des Moines Register.

I am proud to say I am the first elected woman governor in our state. I am proud of the direction we are going. And even better WE ARE JUST GETTING STARTED! pic.twitter.com/JaB54XluiG

Reynolds has supported tax cuts and changes to mental health services across the state. She passed a bill this year that required school employees to be trained on suicide prevention and required school districts to adopt protocols for identifying adverse childhood experiences. She has also led efforts to increase STEM education in Iowa and improve job training.

Democrats and Republicans in Iowa continue to disagree over whether or not education is funded at record-high levels, or severely neglected. Democrats argue that minimal funding is hurting K-12 schools and higher education, while Republicans say funding has never been better and that the state is working on the best way to prepare students for post-secondary education.

It’s true that education spending has increased every year in Iowa since 2000, but growth has slowed over the few years, according to the Des Moines Register. Iowa ranks in the middle of the nation in terms of how much money it spends on education.

Health care and education were the two top issues for Iowa voters in this election, according to a September poll.

“While tonight didn’t turn out the way we would have liked, the energy and the support we received along the way is proof that a lot of Iowans know we need change,” Hubbell said in his concession speech.