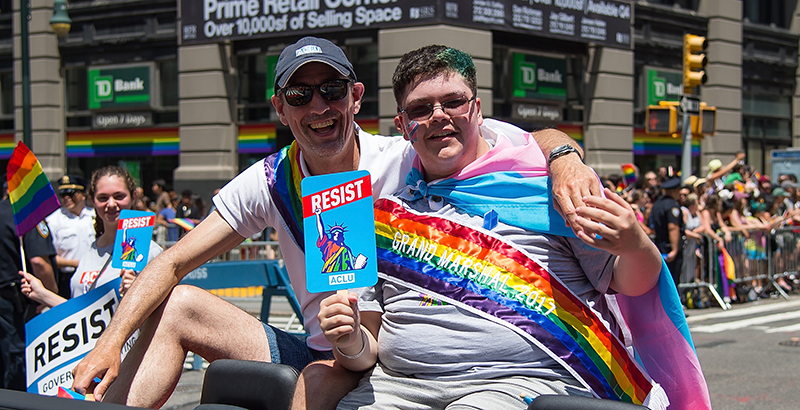 Just hours before a federal judge ruled in favor of a transgender student from Virginia, Education Secretary Betsy DeVos appeared at a congressional hearing in Washington and defended the Trump administration’s stance on public restrooms.

In the May 22 subcommittee hearing, attention turned to an Obama-era guidance document the Trump administration rescinded. Citing Title IX, the federal law that prohibits sex discrimination in schools, the 2016 letter from the Departments of Education and Justice said schools must allow transgender students to use restroom facilities that align with their gender identity. In defending the administration’s decision to revoke the guidance, DeVos said courts had reached “mixed” conclusions on the matter.

That same day in Virginia, the federal judge’s ruling became the latest in a series of court decisions acknowledging the rights of transgender students. But the fight over transgender bathroom policies — in Virginia and elsewhere — isn’t yet over.

Last month the federal judge handed a victory to Gavin Grimm, who is transgender and identifies as male, in his years-long fight to use the boys’ bathroom at his high school — from which he has since graduated. In the order, Judge Arenda Wright Allen of the U.S. District Court for the Eastern District of Virginia struck down the Gloucester County school board’s argument that Grimm’s “biological gender” was female and barred him from using the boys’ restroom. Wright Allen found that Title IX and the Constitution protect transgender students from being excluded from facilities that align with their gender identity, consistent with the Obama-era guidance.

On Friday, however, the Gloucester County school board moved to appeal the decision to the U.S Court of Appeals for the 4th Circuit, arguing that federal law should be interpreted in a way that allows schools to “rely on the physiological differences between males and females rather than students’ gender identity” when separating boys and girls in restrooms.

Since Grimm sued to challenge a school bathroom policy that required he use a single-stall restroom, the case has become a legal whirlwind, and it’s possible the Supreme Court may be called upon to rule on the case. Absent a Supreme Court decision or action from Congress, however, DeVos said the Trump administration doesn’t plan to intervene.

“I’m not going to make up law from the Department of Education,” she told the subcommittee.

In responding to DeVos, Joshua Block, a senior staff attorney at the American Civil Liberties Union who represents Grimm, said the administration “has dug in their heels on their interpretation and I don’t expect them to change anything until they’re forced to do so.”

Last month, the U.S. Court of Appeals for the 3rd Circuit in Philadelphia handed a victory to transgender students, striking down a lawsuit filed against a school district that allows students to use the bathrooms and locker rooms that correspond with their gender identity.

In a 2017 ruling, the U.S. Court of Appeals for the 7th Circuit ruled that both Title IX and the Constitution’s Equal Protection Clause protect transgender students from discrimination, and affirmed their right to access restroom facilities that align with their gender identity. In a settlement agreement with the student, Ash Whitaker, the school district agreed to withdraw its appeal to the U.S. Supreme Court, according to the Transgender Law Center.

On several occasions, courts have dealt blows to transgender rights advocates, including in 2016 when a federal judge in Texas blocked the Obama administration from enforcing the guidance, noting that the government’s directives “contradict the existing legislative and regulatory text.”

Catherine Lhamon, an author of the Obama-era guidance, blasted DeVos’s Education Department for its inaction. Lhamon served as assistant secretary for civil rights at the department during the Obama administration and is now chair of the U.S. Commission on Civil Rights. Countering DeVos, Lhamon said the Obama-era guidance outlined districts’ legal responsibilities under Title IX, rather than creating new policy. In ignoring court precedent, Lhamon said, the Trump administration is bystepping its obligation to enforce the law.

“The reality is that Title IX has been interpreted by multiple federal courts in multiple jurisdictions to protect students like Gavin Grimm in school and to promise that those students enjoy the same protections against discrimination as other students in school,” Lhamon said. “I’m not waiting for someone else to speak to what is now clear in the law, and I think it’s very important that our schools not wait either.”

An Education Department spokesperson did not respond to a request for comment.

Among critics of the guidance is Gail Heriot, a law professor at the University of San Diego and a member of the U.S. Commission on Civil Rights who filed an amicus brief with the Supreme Court, which backed out of plans to hear the case after the Trump administration rescinded the Obama-era guidance. In that brief, she sided with the school board and, in an interview with The 74, argued that the latest court decision in Virginia used an improper interpretation of Title IX. Among her arguments, Heriot said that because Title IX became law in 1972, at a time when the notion of transgender rights was far outside the mainstream, Congress couldn’t have intended for it to include protections for transgender students.

“A lot of people would like Title IX to cover these situations, but you’ve got to think about the importance of the rule of law,” Heriot said. “As much as people are tempted to want to make statutes mean what they want them to mean, that is a fundamentally anti-democratic desire.”

Heriot said schools should have the discretion to decide how to respond based on their individual circumstances. The decision in the Grimm case, she said, “locks schools into one single approach.”

“I think that’s a mistake,” she said. “If it turns out at some point that most Americans believe that the approach is the right approach, then pass a statute.”

As cases continue to work their way through the courts, Sarah Munshi, state and district policy manager at the Gay, Lesbian, and Straight Education Network, said the advocacy group has largely localized its efforts given the uphill battle it faces nationally with the Trump administration. That includes advocacy around the Every Student Succeeds Act, the federal education law. As states work to draft plans to comply with the law, a handful include school climate as an indicator of school performance. GLSEN is advocating for those plans to include policies for LGBTQ youth, she said.

Meanwhile, as the national debate over transgender bathroom rights rages on without guidance from the Education Department, the ACLU’s Block said the courts are the best place for transgender students to assert their rights.

“At the end of the day, if the Supreme Court has to answer the question, it’ll reach the same conclusion that a vast majority of courts have reached,” Block said. “I’m confident if it makes it there that Gavin will ultimately prevail.”