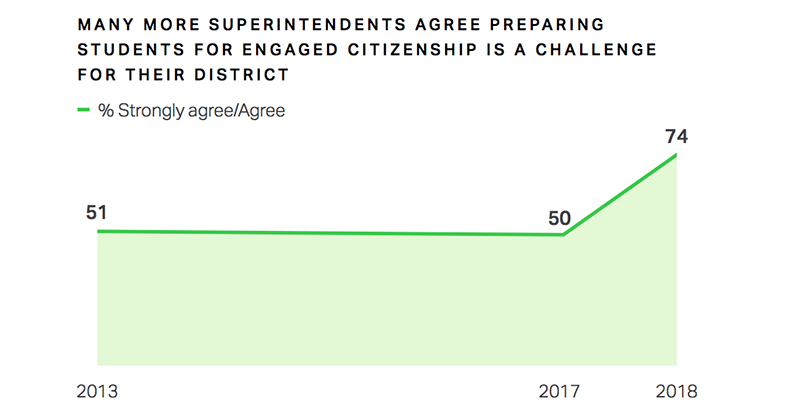 Three-quarters of district superintendents say preparing students to be engaged citizens is a challenge for schools.

This is a huge jump over past years. In fact, the number of superintendents concerned about this rose by 24 points — from 50 percent to 74 percent — in just one year, according to an annual Gallup poll of nearly 2,000 U.S. district leaders.

While the question didn’t dig into why superintendents responded this way, Tim Hodges, director of research at Gallup Education, said the reason might be the nation’s heated political climate combined with the wave of student activism that followed the school shooting in Parkland, Florida, in February. In the months after the shooting, thousands of students across the nation walked out of their classrooms to protest gun violence.

“I think superintendents are more acutely aware of students’ desire or potential to organize in ways that maybe we haven’t seen since Vietnam,” Hodges said.

This finding is one of several from Gallup showing that superintendents continue to be most concerned about educating the whole child, and less concerned with the outcome of standardized test scores.

When asked how they measured the effectiveness of the public schools in their communities, only 9 percent of superintendents said standardized test scores were very important, and 52 percent said they were somewhat important. Much more popular were measurements like students’ hope for the future, student engagement, and high school graduation rates, with 9 in 10 superintendents ranking those as very important.

Since Gallup began polling district leaders in 2013, superintendents have never placed standardized testing at the top of the list. But even so, fewer are ranking it as very or somewhat important, and more are saying it’s not very or not at all important — from 2016 to 2018, these numbers saw a 10-point drop in importance and 10-point increase in nonimportance. 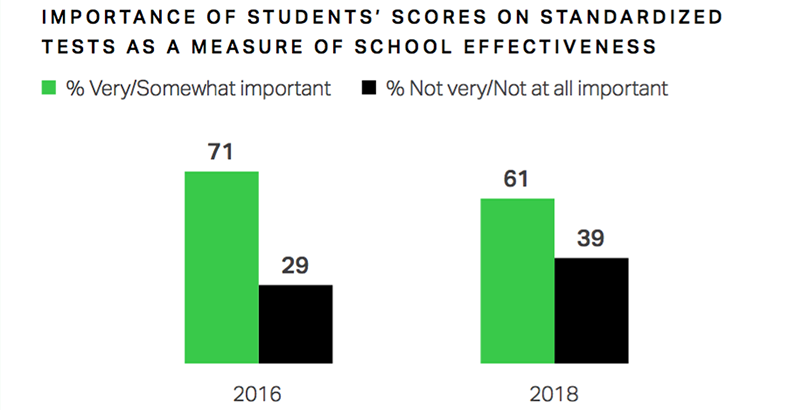 These numbers can vary by geography, the poll found, as superintendents in suburban areas tend to place more value on standardized test scores than those in rural and urban areas. Meanwhile, in rural areas, superintendents are less likely to rate a measure like college enrollment as an important indicator of student success.

Hodges said these findings seem to show that school leaders are moving away from a “fixation” on standardized test scores.

“The pendulum continues to swing a bit away from that and more towards an appreciation for the needs of the whole child, not just what’s on the test,” he said. “Issues like hope and engagement, grit and resilience, and knowing students’ strengths — building a positive school culture seems to be really top of mind for school leaders.”

Hodges cautioned that this doesn’t indicate that academics don’t matter, but rather that superintendents believe “just achieving an academic score isn’t sufficient in terms of preparing students for their future,” he said.

Student engagement continues to be a problem as children progress through school. In a separate survey, Gallup found that 74 percent of fifth-graders say they are engaged, while only 34 percent of 12th-graders say so. This finding comes from a student survey service that schools can opt into, and while it’s not nationally representative, it does include responses from 3,000 public and private schools in the U.S.

Superintendents also rank soft skills above academics as the most important supports for preparing students for college. Two-thirds of leaders said social skills like conflict resolution were the most important, followed by 29 percent who said financial assistance. College exam prep and academic support such as tutoring were ranked last, with 20 percent and 17 percent saying those were important. 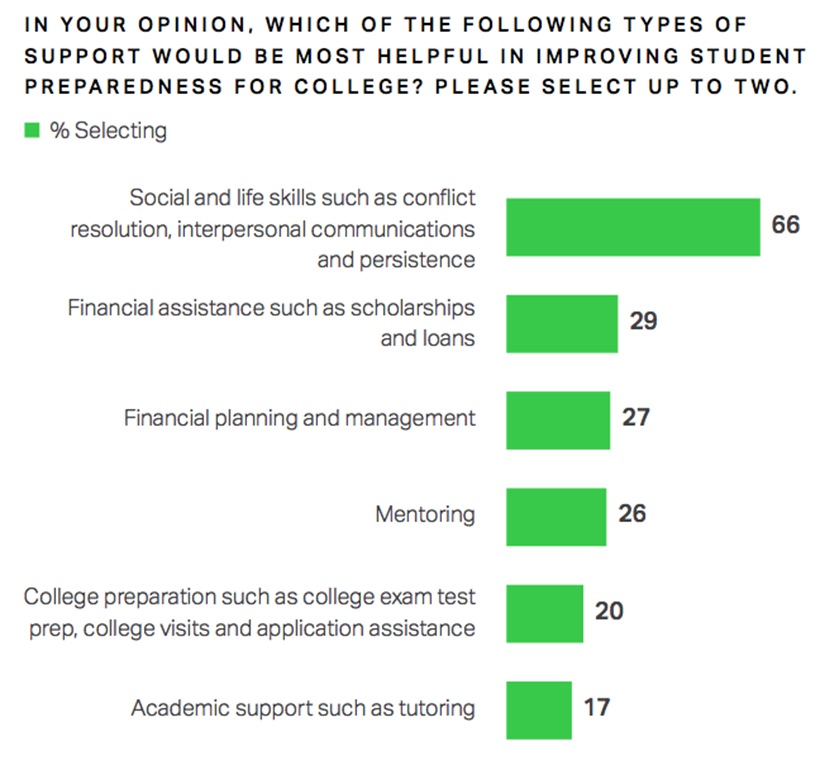 The majority of superintendents — 71 percent — also approve of being able to scale back curriculum and testing to make room for internships and job-shadowing opportunities for high schoolers. Many districts already have these types of opportunities for students, as the poll found that 73 percent of school leaders said their district partners with local businesses to promote career and vocational training.

Hodges predicted that this type of career preparation will continue to be more popular in the future, especially as college costs rise.

“More attention will be put on how we can smooth those transitions from high school to college and/or career,” Hodges said.

‘Boo Guns!’ — New Jersey Parents Sign Their Young Children Out of School for a Teachable Moment In Civic Engagement

Faith in federal leadership in education continues to remain low but declined slightly from last year. The poll found that fewer than 13 percent said the federal government has done an excellent or good job in K-12 education policy over the past five years, and 86 percent said it has done a fair or poor job. This is still slightly higher than ratings under the Obama administration in 2015, when 10 percent of respondents said the government was doing an excellent or good job and 89 percent said it was fair or poor.

The survey is an attempted census of U.S. superintendents — Gallup purchased a list of 12,445 K-12 district leaders and contacted them to participate in the survey. Fifteen percent, 1,892, responded to the request and answered the survey between June 25 and July 18, 2018.