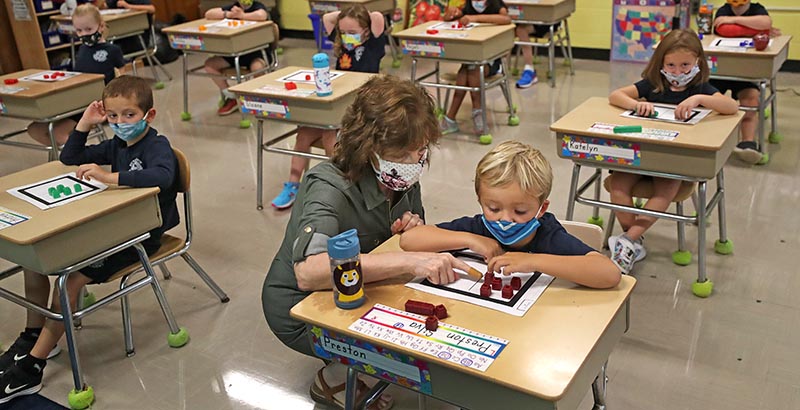 Long before the pandemic closed campuses, children with disabilities were subjected to harsh school discipline far more frequently than their peers without special needs. But now, as districts return to in-person learning with a long list of public health rules like face mask mandates, disability-rights advocates fear that the situation could become worse.

“With the already existing crisis, that sets the stage for the crisis to really explode when buildings reopen,” Wendy Tucker, senior policy director at the National Center for Special Education in Charter Schools, said during a webinar Tuesday. But collaboration between parents and teachers, and less punitive approaches to enforcing school rules, could make all the difference, she said.

Despite a push in recent years to “rethink school discipline” — including debates about the role of campus cops following George Floyd’s death — Tucker said districts’ punitive responses during remote learning offer good reason to worry about what could come next. One Louisiana student was suspended for having a BB gun in his bedroom during remote learning, for example. Other schools have enforced dress codes for children who are learning at home and faced criticism for adopting remote attendance policies during a time of widespread uncertainties. In another incident, a Michigan teenager was sent to juvenile detention because she didn’t complete her online homework. Such anecdotes, Tucker said, don’t offer much hope “that things are going to be any better” when in-person learning resumes.

Even before the coronavirus outbreak, students with disabilities were suspended from school more than twice as often as children without special needs. They were also far more likely to be subjected to seclusion and restraint. Though children with disabilities account for just 12 percent of the school population, they accounted for 71 percent of youth who were physically restrained at school and 66 percent of those who were secluded from their peers in 2015-16, according to the most recent federal data on the issue. Black students with disabilities — who account for roughly a fifth of children with special needs — were especially at risk of facing school discipline, representing more than a third of suspensions.

“Given the disproportionate discipline of students with disabilities pre-pandemic, raising the bar on student expectations feels like a recipe for disaster,” Tucker wrote in a new white paper. “However, schools can actually embrace this change as an opportunity to rethink their approach to discipline. Schools will need to prioritize professional development and intentional staff coaching in order to make important shifts schoolwide.”

While dealing with the slew of new rules around masks, social distancing and lunch protocols, the white paper urges educators to commit to discipline approaches that address the root causes of misbehavior, restorative justice and positive behavior strategies, rather than punitive measures like suspensions, expulsions and seclusion. In fact, restraining kids could put educators at risk because of the physical contact required, Tucker said. Meanwhile, schools should be transparent with parents about new rules and expectations and recognize that many children will go back to the classroom with trauma because of the pandemic, she said.

School face mask requirements have already become a sticking point as children have returned to campuses, prompting controversy and several lawsuits. For example, a Florida mother recently sued the school district in Tampa over its face mask policy, citing her child’s autism and a belief that masks are ineffective as justification to halt the policy. Guidance from both the Centers for Disease Control and Prevention and the American Academy of Pediatrics recommend that children wear cloth face coverings at school to prevent the virus from spreading.

However, the national center noted that face masks can be difficult for some children, and this will require districts to balance the needs of children against public health interests. Children with sensory needs may struggle to wear masks on their faces, according to the group, and others with emotional and behavioral disabilities may take their masks off if they become upset.

Such a scenario “demands intentional planning to avoid a tidal wave of harsh discipline in the name of preventing spread of the virus,” according to the white paper. But there are workarounds, and teachers should work in tandem with parents to develop solutions, Tucker said. For example, she said schools could allow children to wear face shields if a cloth mask isn’t feasible. However, there’s growing evidence suggesting that face shields aren’t effective at controlling the virus’s spread from airborne aerosol droplets.

But a mask with fun designs — such as one with a dinosaur or Star Wars theme — could be more appealing to some children, said Nathaniel Beers, a developmental and behavioral pediatrician at Children’s National Hospital in Washington, D.C. Some children who are averse to wearing masks could grow accustomed if they’re allowed to wear them as bracelets at home before moving them to their faces, he said.

The Education Department’s Office for Civil Rights has also raised the tension between mask rules and children with special needs, noting in a Q&A last week that face coverings present a hurdle for some kids. In instances “where a child with a disability has extreme sensory issues and cannot tolerate wearing a face covering in a school or at all,” enforcing mask rules could violate the federal special education law.

“School districts should therefore make reasonable modifications in their policies, practices or procedures — including any addressing the use of face coverings — when those modifications can be made consistent with the health, safety and well-being of all students and staff, and are necessary to avoid discrimination on the basis of disability,” according to the office.