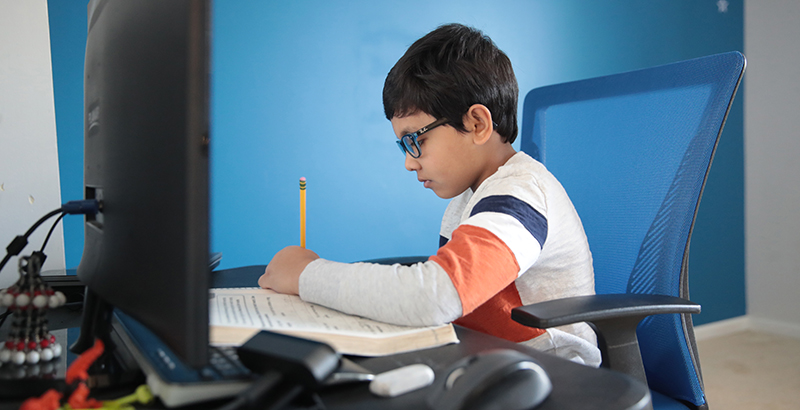 Since the coronavirus outbreak hit the U.S. in mid-March, virtual classrooms have replaced in-person classes. Teachers have had to pivot quickly to online learning and are doing their best to keep their students from falling behind. School districts had not prepared distance learning plans for an extended closure, and now the Centers for Disease Control and Prevention has warned districts that remote learning may have to continue through the fall.

Virtual K-12 schools — most of them for-profit companies — have seized on an opportunity, descending on public school districts across the country to market their products and services for distance learning. Last year, enrollment in these virtual schools appeared to plateau amid complaints about poor outcomes. But now they are quickly ramping up their branding to capitalize on the COVID-19 crisis.

Some are offering free teacher training or a free month of their online curriculum, with the hope that some districts will stay with their paid virtual program in a blended learning model once they reopen. There are many good-faith operators out there offering their services, but also a slew of bad actors that have reputations for abysmal student outcomes, poor graduation rates and exorbitant costs. School districts, which spent more than $12 billion on education technology in 2019, need to research these companies before accepting any of their “no-risk” offers.

A growing number of studies have found that when students move to online formats, it has a negative impact on student achievement. According to the National Education Policy Center, a nonprofit housed at the University of Colorado Boulder, most students enrolled in full-time K-12 virtual schools do not perform as well as their classmates attending brick-and-mortar schools. Of the 320 virtual schools with available school performance ratings, just 67, or 48.5 percent, were rated acceptable by their state education agencies, according to data collected by the center for the 2017-18 school year (71 were rated unacceptable; 182 had no rating reported). The graduation rate was 48.5 percent at virtual schools managed by for-profit companies, far below the national average of 84 percent. Less than half of students graduating and less than half of for-profit schools rated “acceptable” is not good enough for America’s children.

Another critical study, conducted by the Center for Research on Educational Outcomes (CREDO) at Stanford University, concluded that students in virtual programs “learned the equivalent of 72 fewer days in reading and 180 days in math compared with the traditional public school students to whom they were matched.”

The Hechinger Report recently conducted an analysis of dozens of for-profit education software companies and found that they were “promoting their products’ effectiveness on their websites, in email pitches and in vendor brochures with little or shoddy evidence to support their claims.” Hechinger cited Matific, IXL and Edgenuity, as well as K12 Inc., one of the largest for-profit education chains in the country.

We’ve seen this playbook before — in the higher education sector, where for-profit college chains with subpar online programs disproportionately recruit vulnerable populations, including low-income persons and veterans. To get their hands on federal funds, including GI Bill benefits, many of these colleges brand themselves as military-friendly and spend more money on deceptive advertising and aggressive recruitment tactics than on students and instruction. For-profit colleges’ salespeople, under pressure in boiler room atmospheres, overpromise and underdeliver. After enrolling, students end up with worthless degrees, credits that don’t transfer and loan debt they didn’t sign up for.

Years of state and federal investigations finally shed light on some of these bad actors, shuttering dozens of campuses and bankrupting large for-profit chains like the Corinthian College and ITT Technical Institute. Their collapse wasn’t the result of a simple business failure so much as an indictment of a business model devoted almost entirely to gaming the taxpayer-funded financial aid system. We’ve been fighting this battle for years, and now we’re concerned about how that business model is being applied to K-12 virtual schools.

Nonprofit K-12 providers make better choices and have proven reputations when it comes to online learning. Khan Academy provides free resources and classes for students, teachers and parents. For years, Match Charter School in Boston has been posting its pre-K-12 curriculum on the platform Match Fishtank. An enhanced version, Fishtank Plus, is normally a subscription service, but it is currently being offered for free during the COVID-19 crisis, with updated materials and tips for teachers to adapt the curriculum to an online platform.

Keeping kids’ learning on track is difficult enough during this time. School districts that are approached by for-profit companies would do well to take the advice they give their students: Do your homework.

Carrie Wofford is president of Veterans Education Success. Matthew Boulay is the founder of the National Summer Learning Association and author of “How To Keep Your Kids Learning When Schools Are Closed.”

Matthew Boulay is the founder of the National Summer Learning Associationand author of “How To Keep Your Kids Learning When Schools Are Closed.”