Williams: ‘The Make-or-Break Year’ About the Transformation in Chicago’s Dropout Rate Argues for Education Reform Done From the Ground Up 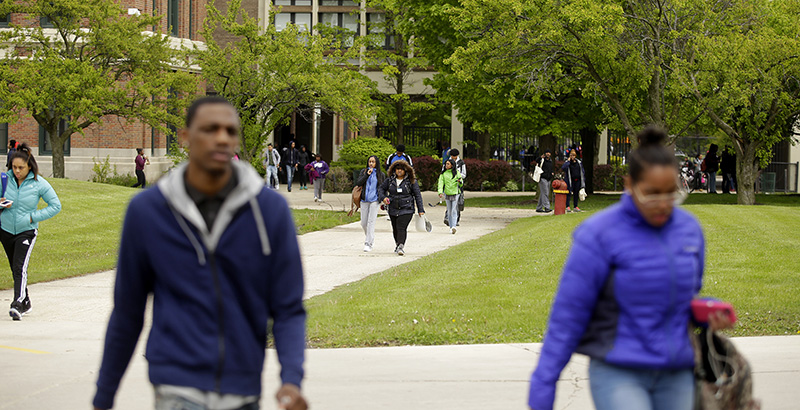 Students walk on campus at Morgan Park High School in Chicago in 2017. (Joshua Lott for The Washington Post via Getty Images)

It’s beyond banal now to notice that the United States is coming apart. It’s Unwinding, warns author George Packer. It’s falling deeper into its Big Sort, says journalist Bill Bishop. Income and asset inequalities are manifesting into geographic inequities — some regions of the country are taking off while others are floundering.

U.S. schools are no different. They participate — and are embedded — in myriad American injustices. Most education reformers have a story about when this hit them, when they first realized how U.S. schools reinforce privileges of race, wealth, gender, etc. Naturally, most education reform starts there, with those big, systemic inequities. If American public schools are perpetuating opportunity and achievement gaps, presumably we need to shift structures around them — we need more equitable funding, distribution of quality teachers, access to academic rigor, and so on and so forth. If U.S. schools are complicit in structural inequity, then the structures need to change.

And yet, here we are, years into major overhauls of academic standards, school accountability systems, assessment policies, and much more … and, well, progress has been incremental, and often uneven. Notwithstanding policymakers’ good intentions — and best-laid plans — so many big, structural education reforms have struggled to deliver.

How should we pursue big improvements in educational equity, if not in big structural rewiring? In her just-published The Make-or-Break Year, The Spencer Foundation’s Emily Krone Phillips explores an alternative well underway in Chicago Public Schools (CPS).

(Read an excerpt from Phillips’s “The Make-or-Break Year: Solving the Dropout Crisis One Ninth Grader at a Time” here)

As Phillips chronicles the rise of CPS’s Freshman OnTrack metric from germ of a research idea to pilot test to underground district-wide trend to pillar of systemic transformation, it’s natural to focus on the idea itself. It started with researcher Melissa Roderick’s finding that students’ high school transitions — how they navigated their freshman year — were a strong predictor for their likelihood of graduating. Those students with no more than one failing grade in a core course were much more likely to get a diploma than those who struggled more in their first year of high school.

Phillips writes that an early-2000s study found that “Students who were on-track at the end of freshman year had an 81 percent chance of graduating” while “Students who were off-track had just a 22 percent chance.” For comparison, consider that CPS’s graduation rate in 2003 was just 55 percent. As a proxy metric, Freshman OnTrack has significant potential — if schools can raise the number of kids who get through their first year relatively smoothly, they should see improvements in their graduation rate.

Of course, that’s no small ask. Anyone who survives freshman year knows how harrowing it can be. The Make-or-Break Year shows how recent neuroscience findings demonstrate that the basic demands of high school can be a tall ask for 14-year-olds. At an age when young adolescents are still growing into their minds and bodies, U.S. schools throw significant new freedoms, expectations, and responsibilities their way. Many kids struggle — and most high school grading, attendance, and accountability systems are set up to punish them for those struggles in ways that can knock them off track at school and in their lives. Phillips’s account tracks the difficult, sometimes uncomfortable conversations CPS teachers and administrators have with each other — and with students — about maintaining rigor while working creatively to provide students with as much personalized support as possible.

It’s engaging reading, and most of the conversations bely easy stereotypes about urban educators, whom Phillips presents in full complexity. The CPS teachers and administrators in The Make-or-Break Year are dedicated and flawed, thoughtful and frustrated, committed and exhausted, compassionate and brusque. They aren’t just heroes or villains. They’re humans, working in always-shifting contexts that can unpredictably support or undermine their work.

Which gets at a core message of the book: the meat of Freshman OnTrack may matter less than the process that brought it to life. Unlike most education reforms, Phillips writes, “Freshman OnTrack … managed to take root, blossom, and cross-pollinate in ways that have positively impacted tens of thousands of lives in measurable ways: it is the rare education idea that made it at scale.” This, she argues, is partly because it grew steadily amid — and with input from — those complex humans who had to make it matter.

Freshman OnTrack grew from Roderick’s work at the University of Chicago Consortium on School Research, which helped spark a series of high school reforms from then-CEO of Chicago Public Schools Paul Vallas. The mixed results from his reforms led the Consortium to, in Phillips’s words, “focus their research and outreach efforts on helping educators understand and solve their own problems through incremental, steady improvement, rather than on setting out to catalyze large-scale policy shifts.”

For instance, in 2005, Roderick started holding a regular meeting of CPS principals, which became the Network for College Success. This was designed to, in a participant’s words, generate “mechanisms with which to share innovation” around on-track rates. Principals shared ideas and compared their progress. Consortium research filled in the gaps: student attendance rates were critical for keeping kids on track, as was a supportive school climate built around strong teacher-student relationships.

Phillips doesn’t overstate the case. Freshman OnTrack wasn’t only a grassroots effort. It was built out of Vallas’s reforms, and his successor, Arne Duncan — who eventually became President Obama’s first education secretary — backed it with his signature earnestness and what Phillips calls his “steely will and keen political instincts.” The district incorporated Freshman OnTrack into school improvement conversations, provided administrators with regular student data reports, and gave schools flexibility to choose their own approaches to raising on-track rates at their campuses. This gave school leaders a goal, urgency, clarity about their progress, and room to think about solutions that would fit their students’ needs.

Plenty has changed in CPS since the early 2000s. It would be simplistic to attribute the district’s significant improvements solely to Freshman OnTrack. And yet, the trend lines track well. At the close of the 2017-18 school year, after years of increases in its Freshman OnTrack rates, the district’s graduation rate was over 78 percent.

Compelling as this is, Phillips’s book will give many reformers pause. The work she describes in Chicago requires a great deal of trust and patience from leaders who are animated by the considerable evidence that public education systems — and the adults working in them — are perpetuating inequities. In her account, there are passing references to teachers showing daily movies instead of conducting classes, others who are unwilling to get on board with their schools’ on-track meetings, and similar ugliness. A few of these teachers change their attitudes and find constructive ways to improve their support of CPS high school freshmen. But most of the struggling or recalcitrant teachers fade out of the narrative and their schools’ improvement efforts. This will bother some readers — surely these teachers’ examples deserve more attention in a book about trusting educators at the school level to engage in collaborative, problem-solving inquiry. After all, one of the core premises of much recent education reform is that it can be difficult to shift adults’ attitudes and behaviors without strong incentives.

In other words, The Make-or-Break Year poses an unsettling question for anyone who cares about educational equity. What if you have to choose? Would you pick dramatic structural reforms that are difficult-to-impossible to implement, or humbler efforts that start with the adults working with children each day and are difficult to purposefully steer toward equity? Do you push big, urgent reforms, or smaller ones, albeit ones that that can be implemented by actual humans? Phillips presents Freshman OnTrack as something of a mix, but many advocates will struggle with its decentralization of reform decision-making. And for this reason, above all else, her book deserves the widest possible readership.