Williams: It’s Not What Trump’s Education Department Will Do That Should Worry Critics; It’s What It Won’t Do 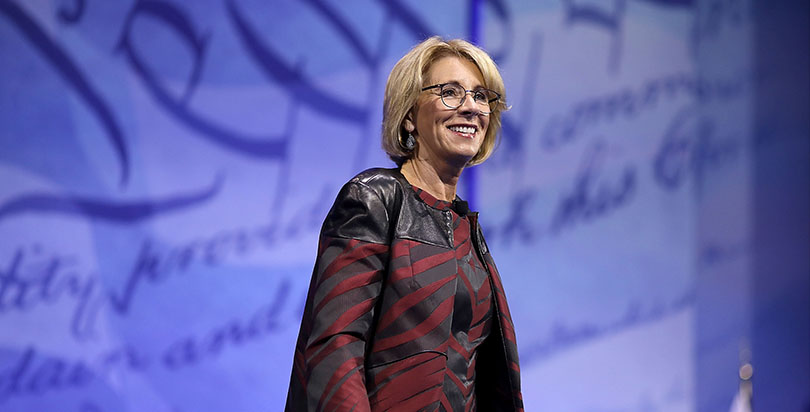 Much of the public concern about Education Secretary Betsy DeVos has consisted of folks burning themselves up speculating at the damage she’ll actively do to public schools.

When she was nominated, the education media wondered whether she would make good on then-President-elect Trump’s campaign promise to convert the federal government’s funding for high-poverty public schools into a voucher system. In March, liberals read Trump’s proposed budget and found confirmation of their fears: As written, it would cut billions from teacher training in favor of significant new spending on school choice. In a recent talk at Brookings, DeVos hinted that her department might use its authority to encourage states to expand school choice programs.

Is there a there there? In the Trump era, when every new, suspicious fact just gets more concerning upon further investigation, when outwardly disconnected events seem to keep stubbornly linking up into nefarious conspiracies, it’s easy to survey DeVos’s record and short time in office and see the groundwork for a steady campaign against public education.

But much of this sort of hand-wringing about DeVos is misplaced. Given the limits that Congress placed on the Department of Education at the tail end of the Obama administration, her ability to make states hew to her agenda is limited. What’s more, the public’s general disinterest in education as a political issue will also limit DeVos’s room to maneuver. Specifically, while Americans often express concern about the state of public education, they’re generally comfortable with their own schools. This means that any dramatic changes to American schooling usually come with greater risks than rewards.

Put it this way: Critics looking for major activism from DeVos are likely to be disappointed. It’s far more likely her “sins” against public education will be sins of omission than of commission.

Here’s a handy way to keep the two clear in your head. Let’s say you have a really nice set of wine glasses. They’re beautiful keepsakes, family antiques handed down by your partner’s dear great-grandmother, perfect in every way — except that they’re way too fragile to put in the dishwasher. Late one night, after a particularly long, rowdy dinner party, you decide to clean up the mess and chuck them in there anyway. The next morning, you awake to find the heirlooms — and your relationship — in pieces.

That, my friend, is a sin of commission. Like a massive, fundamental adjustment to how the federal government distributes school funding to support underserved kids, sins of commission are easy to spot. You knew what you were doing, but you did it anyway.

Sins of omission, by contrast, are tougher to see. Imagine that after huzzah-ing the last guest out the door after the aforementioned rowdy party, you turn around, survey the bacchanalian wreckage, and stump off to bed. The next morning, you awake to find the mess still there, along with a grumpy partner chasing your newfound rodent roommates out of the kitchen.

As far as DeVos is concerned, critics ought to spend less time (and cortisol) worrying whether she is trying to “advance God’s kingdom” via U.S. public schools and pay more attention to the consequential things she isn’t doing. In a February interview with Axios, after her confirmation, DeVos expressed skepticism about the federal role in overseeing public education. While she suggested that government involvement made sense “when we had segregated schools and when … girls weren’t allowed to have the same kind of sports teams,” she couldn’t think of any current issues that might warrant attention from her department.

This is either supremely cynical or gobsmackingly naive. Folks who spend their lives working in education are aware that U.S. school segregation is a present-day plague, not some conquered problem of the past. And they know that, absent oversight, states routinely use federal education dollars for purposes that do not help underserved students succeed.

That’s why DeVos’s hypothetical sins of commission warrant much less anxiety than they’re generating. If she follows Trump’s budget roadmap and tries to eliminate major federal funding streams, the education world will be ablaze — creating new headaches for an administration that already generates at least a half-dozen daily migraines for itself.

But if DeVos sticks to her public position that the federal government’s civil rights authority is obsolete and unnecessary, there will be a steady stream of sins of omission. During the Obama administration, the department’s Office for Civil Rights struggled to keep up with the number of complaints it received. How will that office perform its function effectively under a secretary of education who is skeptical of its purpose? And how will the Trump administration’s proposed budget cuts affect its capacity?

That’s where DeVos’s critics should be looking. Sure, sins of omission are harder to see. It’s not as easy to find out that the Department of Education didn’t act as it is to scream bloody murder when it does. If the department doesn’t investigate claims that English-language learners are being systematically denied access to educational opportunities in Arizona (or in Cincinnati, or in Charleston, etc.), will that spark national outrage? If the department allows states to weaken oversight of and accountability for persistently failing schools, will anyone complain?

What’s more, it’s harder to ignite controversies around DeVos’s inaction on civil rights or federal accountability, since any critique will have to begin by articulating a convincing alternative version of what she should have done. That is, if DeVos advocated for a national transgender bathroom policy, there would be massive pushback. If her department never really gets around to doing anything about current and future transgender civil rights complaints, it'll be hard to generate an opposition movement.

So, will Secretary DeVos “destroy public education”? She seems to be committing herself to a sustained crusade against it: DeVos almost never misses an opportunity to denigrate public school performance. She dismissed teachers at a D.C. middle school she visited as passive, in “receive mode.” During her talk at Brookings, she complained that it would be hard for U.S. public education “to get a lot worse.”

But it’s far more likely that the real harm will come from what DeVos doesn’t do.