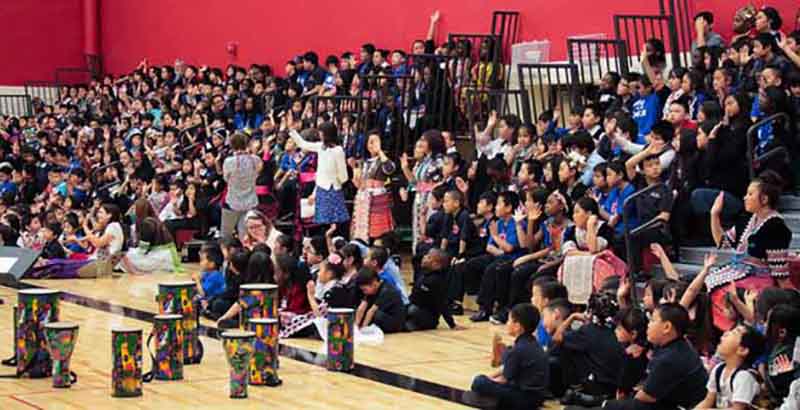 I recently visited a high-performing charter school in a low-income urban area. Like so many others — like the one my kids attend in Washington, D.C. — it was founded by members of a local community of color to provide a better public school option for their children, for kids who were being persistently underserved by their traditional public schools.

This one isn’t built around serving the linguistic and cultural needs of Spanish-speaking families (like my kids’ school) or African-American students (like other urban charters). Rather, Noble Academy is a Hmong-language school in Brooklyn Park, Minnesota, just northwest of the Twin Cities. And though it was designed by — and for — the Hmong community, the school is starting to appeal to other families, as well.

I grew up in the Midwest. Whenever I get nostalgic, I think of this beautiful old line in Carl Sandburg’s “Sins of Kalamazoo,” where Sandburg writes of travel-itchy Midwestern children who “‘want to see the world’/And when they have looked the world over they come back saying it is all like Kalamazoo.”

This yearning for the exotic world beyond is an old Midwestern tradition. But after a century of sharing its best people and products with the world, the area now struggles to hold onto young, well-educated workers. The Midwest continues exporting people, but they aren’t coming back in significant numbers.

Minnesota, however, stands out as something of an exception. It remains one of the region’s primary destinations for newcomers to the United States.

For context, consider that nearly 13,000 of the United States’s population of nearly 40,000 Hmong-speaking English learners live in Minnesota. These languages are primarily spoken in parts of China and southeast Asian countries like Laos, Thailand and Vietnam.

These children are a critical resource for Minnesota’s future growth and prosperity. But while their families are helping Minnesota to pace the Midwest in terms of population growth, the state’s education system has had mixed success in helping their children succeed.

The report’s findings were no surprise to Minnesota’s Hmong-speaking community, which had been frustrated by their children’s progress in Minnesota schools for years. In 2007, these concerns prompted Hmong leaders to start Noble Academy, a pre-K through eighth-grade public charter school focused on helping Hmong students succeed and preserving their connection to their language and culture.

“We knew there was a hunger,” says Dr. Mai Yia Chang, Noble’s deputy superintendent of academics.

Minnesota’s charter school regulations give Noble Academy’s leadership significant autonomy to construct a schoolwide curricular model that meets their students’ linguistic, academic, and cultural needs. Above all, Chang says that the school is built around “the belief that all kids can learn.”

“When we start making excuses, they will start living out those excuses for us. But when we make no excuses and have high expectations for our staff and students, that magic can happen.”

Xee Yang, a Hmong literacy teacher — and board member — at the school, helps students through the Hmong language’s system of consonants (including “dual” and “triple” consonants), then its tonal structures, and finally, the vocabulary they need to read and write. She believes that the school’s focus on Hmong language and culture is critical for helping its students to succeed.

“I want to help my community preserve the language and culture,” she explains. “I do believe that’s a very important part of who you are as an individual … since the Hmong have moved to the United States, a lot of children can’t speak the language, they don’t understand the culture anymore.”

The school’s Hmong language focus also helps her engage with English learner students and their families.

“Most [Noble] parents don’t speak English, and their students don’t have the whole English language learned yet. So I try to help them, I speak in Hmong to them to make sure that they can understand and kind of bridge between English and Hmong as well.”

In lesson and unit planning for Hmong literacy, the school intentionally builds connections between its academic content — math and reading curricula — and Hmong language development programs.

The teachers “like to engage you in the topics you’re learning about,” says Felicia, an eighth-grader at the school.

To the extent Noble Academy was designed for Hmong students by Hmong leaders, it appears to be a success story. The 2016 MinnCAN report found that the math and reading proficiency rates of Asian-American ELs at Noble were significantly above the state’s numbers for these students.

“[Hmong parents] make the commitment to send their kids here because they trust the leadership here,” says Superintendent Neal Thao. “At the end of the day, they want to make sure that the kids know how to read and write.”

Over time, the school’s success has also attracted a number of non-Hmong, English-dominant families. These students get the same Hmong language and culture lessons.

“Some of them love it, some of them hate it,” says Yang. “But it all starts with you building that relationship with them … they get excited learning a different language.”

Meanwhile, Noble’s schoolwide rates of academic proficiency (or better) in math and science slightly outpace the state’s. By the time Noble students are in eighth grade, they’re outperforming state proficiency rates in math, science and reading.

Nicole Neidermeier, a Noble teacher and teacher coach, credits the school’s culture. She says that, at Noble, “The cool kids are the smart kids.”

Perhaps unsurprisingly, school leaders say that there were more than 200 children on the school’s waitlist for the 2017–18 school year.

This is an exciting prospect: A school designed to serve the unique needs of Hmong-speaking students is now becoming a school that’s meeting the needs of students outside that community. A school built around preserving an immigrant community’s language and culture is also advancing the linguistic and cultural development of English-dominant children.

So, perhaps now, just as Sandburg described, these Twin Cities children will grow up, head out to find their futures, and find that the whole world is now more like Minnesota than ever before.