Why They Leave: New Book Explores the Reasons Teachers Give for Quitting the Profession. (Hint: It’s Not Students) 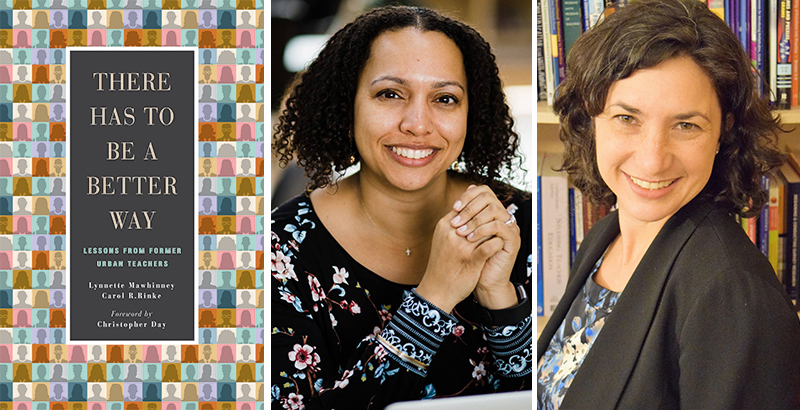 Lynnette Mawhinney and Carol Rinke were once part of that churn (full disclosure: so was the author of this article). Now, with both women serving as professors at teacher prep programs, Mawhinney and Rinke have co-authored a new book that illuminates the many reasons teachers leave the profession and offers recommendations on how to stem the tide.

The book, There Has to Be a Better Way: Lessons From Former Urban Teachers, published by Rutgers University Press, is based on in-depth interviews with 25 former teachers from around the country who left the classroom on their own terms. Citing research that nearly half of all new teachers leave within five years, the authors tried to find the stories behind the statistics, focusing on teachers at high-poverty, high-minority, urban schools that suffer from frequent turnover. All of the former teachers interviewed, whom the authors term “teacher leavers,” taught in the greatest-need areas of secondary science or English.

Unsurprisingly, the authors don’t hit upon a single thread explaining why teachers leave in droves. One teacher had four principals in two years. Another taught four different courses in two years. Most of the teacher leavers anticipated education being a more stable profession. Twenty-two of the 25 teachers interviewed “admitted to being overly stressed and tired.”

One central theme: Students weren’t the ones driving teachers away. “The problems I had were mostly with the adults,” said one teacher. “I really never had problems with my students; it was the adults that were exhausting.”

The authors also explore how racial insensitivity often pushes teachers of color out of the classroom, a development the authors describe as “heartbreaking” given the yawning gap between the diversity of public school students (who are 51 percent non-white) and public school teachers (who are 20 percent non-white). One African-American teacher relayed a story of a white principal who gave her a critical teacher evaluation, explaining, “I’m only hard on you because you’re Black.” The teacher moved to a different school — a charter with a black principal and a white school founder — and left the school, and the profession altogether, after she said her relationship with the founder turned “combative” once she recommended students read more “culturally relevant” texts. Mawhinney and Rinke write, “It was the politics that racialized her career as a secondary teacher and led to her decision to leave the classroom.”

Aspects of the book reflect the deep demoralization and cynicism of some teacher leavers. “It was insane and I just felt like I was abusing students because I was testing them so much,” said one teacher, adding that the 13-year-olds had “been through all these tests and they were sick of it and I was sick of it.” “The system is so broken, and I’m overworked, and I’m underpaid,” said another. “We were doing more harm than good,” said a third.

The authors attempt to lighten the book’s tone by closing out each chapter with recommendations for policy changes to increase teacher retention. The ideas range from the more conventional — urging administrators to explicitly discuss different racial experiences — to uncommon, like pushing districts to shut off their servers evenings and weekends to force teachers to take a break — but they have the intended effect of making the book more of a constructive resource than a depressing screed.

“We were very intentional about making sure voices were balanced,” Mawhinney said in an interview with The 74. “We don’t want people to be ‘Womp womp, OK.’ We hear these stories, and some of them are hard stories to digest, but we can do something about it.”

Some of the most compelling parts of the book involve the authors’ own experiences. Both entered the classroom through traditional preparation programs in the late 1990s and worked at multiple schools before transitioning into doctoral programs. Rinke, whose mom was also a teacher leaver, taught in New York City before realizing that her introversion made it hard for her to lead classes all day long. She’s now an associate professor at Marist College. Mawhinney, now an associate professor at the University of Illinois at Chicago, left after clashing with an administrator who she said told her to change the grades of an official’s niece. “I still see myself and identify as a teacher,” she writes, “but the reality is I am a teacher leaver who is still trying to emotionally recover from that very delayed realization.”

The book builds off of studies by University of Pennsylvania professor Richard Ingersoll and organizations such as the Learning Policy Institute. Given the focus recent teacher strikes have placed on inadequate salaries, it is noteworthy that only six of the 25 teachers interviewed mentioned pay as a reason for leaving. What’s more, “some teacher leavers have indicated greater satisfaction with their careers outside the classroom, even when their salaries are lower,” Mawhinney and Rinke write.

Part of the book’s value is its ability to add nuance and personal detail to an issue often lost in the mire of national statistics. But the book is not without its flaws. Its sample is inherently limited, as the authors concede, and other stakeholders involved in teacher retention, such as teachers unions, are curiously absent, particularly since research shows that key features of career satisfaction — autonomy and control — run counter to what unions typically advocate for: uniformity. Furthermore, the teachers sampled offer 18 different ways in which their post-teaching jobs offer them more satisfaction than teaching. The only areas in which they are less satisfied — benefits and job security — are ones that unions have traditionally made their own. However, the authors do not call on unions to prioritize increasing teacher retention, such as by using mentor teachers or offering sabbaticals, which some schools in England have tried.

All told, There Has to Be a Better Way stands as a useful resource for district administrators and higher-education officials at teacher preparation programs, not to mention teachers themselves.

Said Mawhinney, “Teachers can use this as a tool to be like, ‘Hey administration, there are some things that can be done to make our professional work experience a little bit smoother.’”