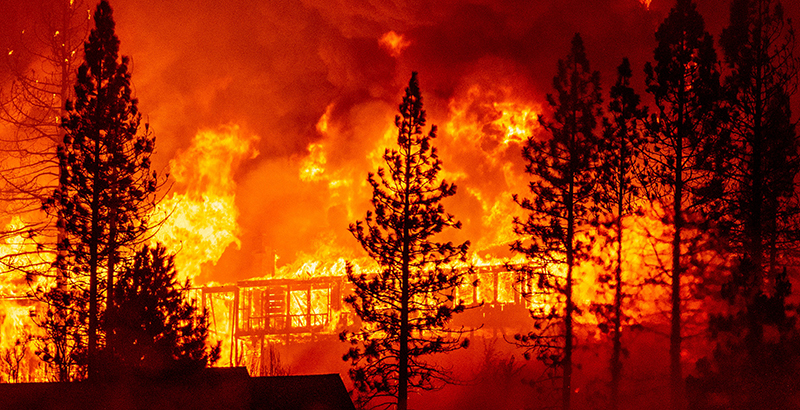 A home is engulfed in flames during the "Creek Fire" in the Tollhouse area of unincorporated Fresno County, California, on Sept. 8, 2020. (Getty Images)

The climate crisis is already exacerbating the housing crisis. Last year, wildfires burned and damaged about 17,700 structures in the US. It was one of the most destructive seasons on record, and frighteningly, part of an upward trend. Wildfires are already contributing to housing shortages in California and Oregon. Texas, Washington, and Colorado have also lost a significant number of buildings to fire in recent years. In the past decade, climate change-fueled natural disasters drove internal displacement worldwide and forced 20 million people from their homes each year, per the UN.

That’s why some wildfire-prone areas are reworking emergency pandemic housing initiatives to shelter residents affected by extreme weather. Oregon and California are renting and purchasing hotels to house residents who have lost their homes to wildfire, as well as unhoused people living in fire-prone areas. They’re also converting some of the units into transitional and permanent affordable housing, depending on the needs of the community.

“In one single investment, you can add emergency shelter and also address the root cause of long-term lack of affordable housing,” says Megan Loeb, program officer at Oregon Community Foundation. The foundation oversees the state’s Project Turnkey, which launched in October 2020 to convert hotels to various types of housing. She adds that hotels and motels can almost immediately shelter people — plus they’re more welcoming to families and LGBTQ people, and safer during a pandemic, than congregate housing.

As pandemic initiatives demonstrated, hotels and motels are much easier to adapt than, say, office buildings, and retrofitting is a faster and cheaper solution than building from scratch. Plus, repurposing existing structures like hotels is more environmentally friendly. Even people living in encampments who are loath to go into shelters tend to be more open to staying in hotels, advocates say. Many hotel owners are open to selling, given how COVID-19 has decimated the tourism industry, and owners are generally reimbursed well, according to Bloomberg.

California’s Project Homekey launched last June with $846 million in state and federal emergency funds to purchase hotels and establish permanent housing for people experiencing homelessness. Over six months, it created 6,029 new units of permanent housing. On July 12, Gov. Gavin Newsom expanded the program with $12 billion over two years to create another 42,000 units — the largest such investment in state history.

Seeing California’s success, Oregon launched a Project Turnkey in the wake of the 2020 Labor Day fires, the state’s most destructive blaze on record. In one weekend, 4,500 homes were lost, many of them affordable. The wildfire devastation plus the ongoing pandemic meant shelters were full and also dangerous. The state was already mulling a program like Turnkey, and the fire created a new urgency. As part of a larger wildfire relief package, Oregon allocated $65 million for nonprofit partners to purchase and renovate 18-20 hotels, with the goal of housing 1,000 people for up to a year, providing them with tailored supportive services, and funneling them into other permanent housing. $30 million of this was for six rural counties hardest-hit by the fires, and the remaining $35 million for shelter throughout the state for anyone experiencing homelessness.

“Project Turnkey really represents the state’s biggest investment in direct homeless services,” says Rep. Pam Marsh (D-Ashland), a key champion for Project Turnkey whose district was hard-hit by the fires. “I think this can be game-changing, because we’re able to give communities real assets that will be centers of activity for homeless services. Once you have a foot on the ground, more things are possible.”

In its first phase, Turnkey added almost 900 beds over 19 properties in 13 counties in less than eight months — a roughly 20% increase in Oregon’s supply of emergency year-round shelter beds. The program partners are gradually adapting the hotel units into permanently affordable housing, adding amenities like kitchenettes to bring them up to code, according to Loeb. At the end of April 2021, Oregon passed a bill that eases the ability to convert hotels into shelter and housing. In June 2021, Oregon approved another $9.7 million for Turnkey to fully fund approved projects and create 132 more units of emergency housing.

“[Project Turnkey] addresses about one-tenth of the need in Oregon. It’s a very important piece of the puzzle, but it’s only a piece,” says Gina Nikkel, Executive Director of the Association of Oregon Counties, which has been involved with Project Turnkey since its inception. She says many of the Turnkey clients have experienced trauma, and stresses the importance of wraparound services in helping the project succeed. “Those displaced by COVID might need food brought to them, those hit by wildfires might need services to help them rebuild their home or to find permanent affordable housing, and those with mental health issues or addiction also need specialized help.”

Temporarily housing people in hotels isn’t a new idea, but the practice accelerated during the pandemic as cities rented out hotels to shelter the homeless and give hotels a boost. Converting them into permanent shelter is more novel, but King County near Seattle — where the coronavirus first began to spread in the US — is one making a large investment. The county ran a successful hotels to shelter experiment that it’s reworking to address chronic homelessness, with $350 million to buy and convert hotels into long-term housing. It just purchased its fourth hotel.

Adding to the urgency of this moment, the CDC’s eviction moratorium is set to expire at the end of July. Housing advocates have been sounding the alarm about a potential wave of evictions, and Black and Latinx tenants and small landlords will likely be hardest-hit. Wildfires and other natural disasters tend to impact marginalized communities the most — including people of color, low income people, and people with disabilities — who tend to be more exposed to dangerous conditions and have fewer resources to turn to afterward. Essentially, extreme weather multiplies existing housing shortages and inequalities, a 2019 Center for American Progress (CAP) study shows.

“Policy issues are looked at in silos, but the problem with climate change is that it affects everything,” Ortiz says. “When we’re thinking about climate resistance plans, housing should absolutely be part of the discussion.”

Santa Barbara, California, is attempting to do exactly that. It recently approved a pilot initiative to lease a hotel and provide wraparound services for homeless residents living in “fire-prone encampments” for 120 days. In May, the city saw a streak of 18 small fires in densely vegetated homeless encampments. Amid this was the Loma Fire, which was reportedly set on purpose by a person using methamphetamine. It forced the evacuation of a neighborhood, ultimately consuming nine acres and sparking panic among residents that a similar blaze in different conditions could burn the city.

“The Loma Fire was really the impetus to make something happen now,” said Jeff Shaffer, a housing advocate in Santa Barbara with S.B. Alliance for Community Transformation who is involved in the project. He says two weeks in, the county has already housed 39 people in the Rose Garden Inn and put them on the path to permanent housing — and there haven’t been any complaints from the neighbors. He chalks this up to extensive relationship-building.

This article originally appeared at Next City and is published in partnership with the Solutions Journalism Exchange.

Submit a Letter to the Editor
September 6, 2021

Julie Strupp is a contributor to Next City.