Why a School’s Floor Plan Is So Important: New Research Shows That 78 Feet Can Make All the Difference in Helping Teachers Collaborate With Struggling Colleagues 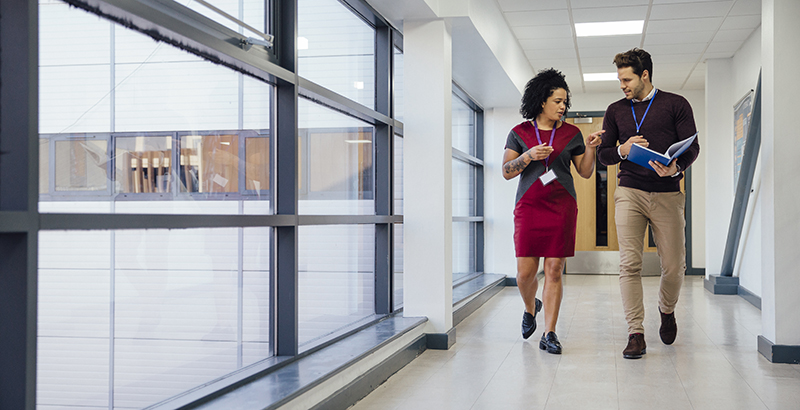 Seventy-eight feet. That’s a key number when it comes to the ability of teachers to interact with — and influence — the colleagues around them, according to a research paper by James Spillane, professor of learning and organizational change at Northwestern University, and Matthew Shirrell, assistant professor of educational leadership and administration at George Washington University.

The researchers spent four years studying 14 elementary schools in a Midwestern suburb with a total of 6,000 students to discover just how the distribution of classrooms affected teacher-to-teacher interactions. The answer, they found: Classroom alignment makes a huge difference.

“Proximity matters,” Spillane says. “The elephant in the schoolhouse is the very obvious thing that space matters, and we take it for granted.”

While schools and districts have formal meetings for teachers working in the same grade level or on the same subject, Spillane says, happenstance conversations may prove just as important for improving instruction. “Something comes up when you are teaching a lesson and you need to ask somebody about it, and then you bump into someone in the hallway,” he says. “It was a needed interaction.”

To figure this out, Spillane says, the researchers had to look not just at raw distances but also at functional work zones, overlapping teacher traffic patterns, and entry and exit points to classrooms and buildings. Using geographic information system software, the researchers overlaid school floor plans with satellite images and traced walking routes through the corridors, producing maps showing key points where teachers overlapped. They then determined staff members’ “functional zones” — the areas of the building they were most likely to visit — and tracked the likelihood of interactions between teachers based on location.

It took a lot of data crunching to determine what many teachers already knew: Proximity was the main reason they had meaningful interactions with colleagues on instruction.

To maximize this proximity, even in schools with a traditional “egg crate” design of long hallways lined with self-contained classrooms, Spillane and Shirrell say that thoughtful classroom assignments and functional space layout can help overcome these limitations.

Principals, Spillane says, should put their best teachers in close proximity to those who need the most support. “When making assignments, think about how you can maximize interactions between the best teachers and the weaker teachers so you can promote development and knowledge,” he says.

He also suggests getting creative with functional work zones — for example, changing the location of teacher lounges or offices, moving copy machines and other shared-use spaces, or forcing the use of different entry and exit points to change teacher traffic patterns.

“The big take-home for school principals and leaders is don’t ignore the obvious,” Spillane says. “When you assign teachers, don’t just think about grade level, but where the classroom is and who they are likely to interact with.”

After the Tornado, an Innovation in School Design: How Joplin’s Rebuilt High School Is Protecting Students From Mother Nature — and Peer Conflict