The story of how Brandice Hatcher’s life fell apart near the start of the pandemic is by now a familiar one. The single parent of two, she couldn’t supervise her 2-year-old, help her 10-year-old with distance learning and return to her in-person job as a customer service representative.

Hatcher was preparing to homeschool her daughter and trying to get approval to open an in-home child care center when it occurred to her that her lousy circumstances might be hiding an opportunity. Before COVID-19, she had been working to launch a nonprofit that would mentor Black girls involved with the criminal justice system or at risk of ending up there.

Why not start a learning pod in her Wisconsin home? Other low-income parents could keep their jobs while she oversaw remote learning for six girls in grades 4 through 8 — with a hefty dose of the Black girl magic she had in mind for her nonprofit.

Using a $10,000 grant from the National Parents Union, Hatcher is in the process of opening her Righteous Voice Mentoring pod. The girls under her tutelage will stay enrolled in the Madison Metropolitan School District, but with additions such as membership in the national Black Girl Book Club, encounters with strong Black women in their community and other activities to promote the development of healthy identities.

“A place where they can come and do their learning and get a little bit more about what it means to be a Black girl,” Hatcher explains. “I’m bringing a little of my mentoring into it.” 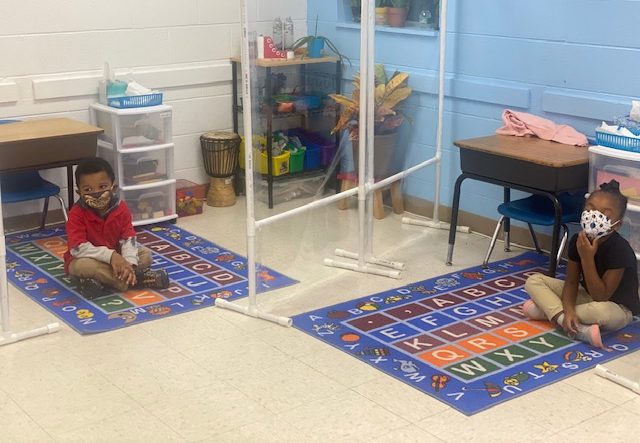 Hatcher’s is one of 37 efforts recently funded by the parents union, with the goal of enabling families to create equitable versions of the pandemic pods that have occupied headlines since schools closed in the spring. Most of those stories depicted affluent parents making arrangements to take turns overseeing distance learning in one another’s homes or hiring their own teachers, prompting concerns that the pods would exacerbate segregation or deepen the educational inequities thrown into sharp relief by school closures.

In contrast, the parents union grantees all seek in some way to close persistent gaps unaddressed by traditional schools, with themes ranging from affirming families’ race and heritage to providing specific curriculum for a very small number of students with similar needs.

Video Explainer — The Year of the ‘Learning Pod’: With Schools Going Virtual, How Different Parents Are Looking to Launch Their Own Study Groups at Home

The 8-month-old nationwide network of parents and education advocates solicited proposals in August from individuals and groups supporting students who are traditionally underserved by schools. The grantees are funded using $700,000 from the VELA Education Fund to make awards of up to $25,000. VELA, in turn, is supported by the Walton Family Foundation and the Charles Koch Institute in underwriting several organizations, including the parents union, that are funding microschools, homeschool co-ops and other “out-of-system” models.

The parents union received hundreds of applications, selecting 37 in two rounds of grantmaking. The first 13 received checks the last week of August, and 24 more were approved in September. Grant recipients were asked to track and report their spending in general terms.

Among the grantees are initiatives to fund the inclusion of refugee children in pods composed of middle-class families, support home-based bilingual literacy and bolster social-emotional learning for children in foster care. 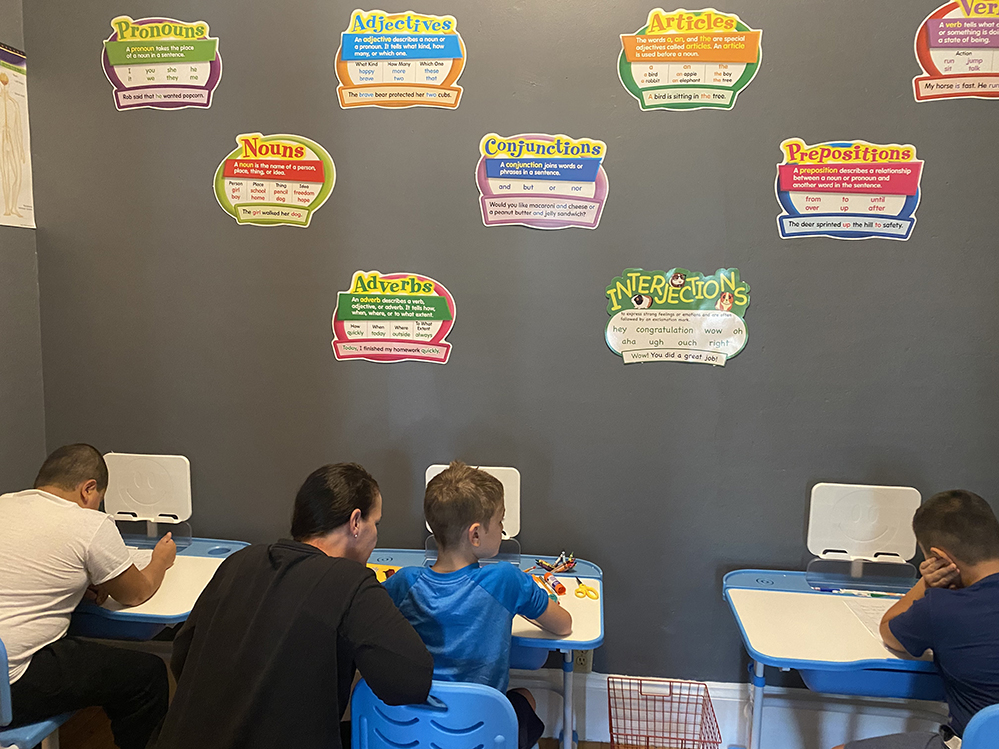 “Parents have always just had to take what they get,” says Keri Rodrigues, the union’s co-founder and president. “What we are hearing is parents saying, ‘Well, if by necessity I have to step in, why not do what I’ve always wanted to do?’”

Rodrigues herself is one of two parents managing a six-student pod that includes white, Hispanic and low-income children in grades 2, 3, 4 and 7, four of them receiving special education services. 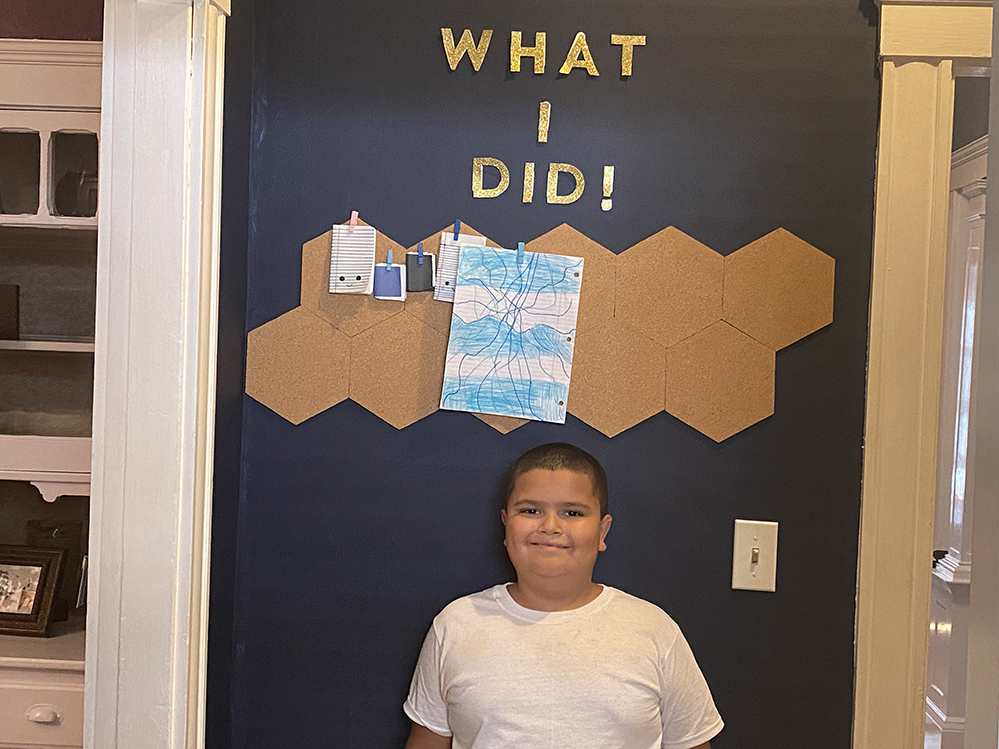 Robin Lake, director of the Center on Reinventing Public Education, is among those tracking the different kinds of parent-driven microschools, pods and other nontraditional education efforts.

“This is an opportunity to understand parent and student demand in a way we’ve never seen before,” she says. “It’s very different than asking parents what they want in a survey to give them the power to go do it.”

Concerns about quality and inequity in the pod movement are valid, Lake adds: “But what the Parents Union is showing is it need not be. If you provide support to low-income families, they have ideas.”

She didn’t find it at all surprising that several of the grantees intend to provide affirming environments for children of color. “The racial element here is going to be really important, especially at this moment in America,” says Lake. “I’m interested in what the culturally specific pods will choose to try to heal kids.”

For Hatcher, in overwhelmingly white Madison, this means providing Black role models and culturally relevant materials that she says are lacking in schools. Her daughter, she notes by way of example, has been the only Black child in her classroom for multiple years. Children of color lack teachers who look like them.

“Our education system does not support Black kids at all,” she says. “That’s why I am trying to use this as an opportunity.” 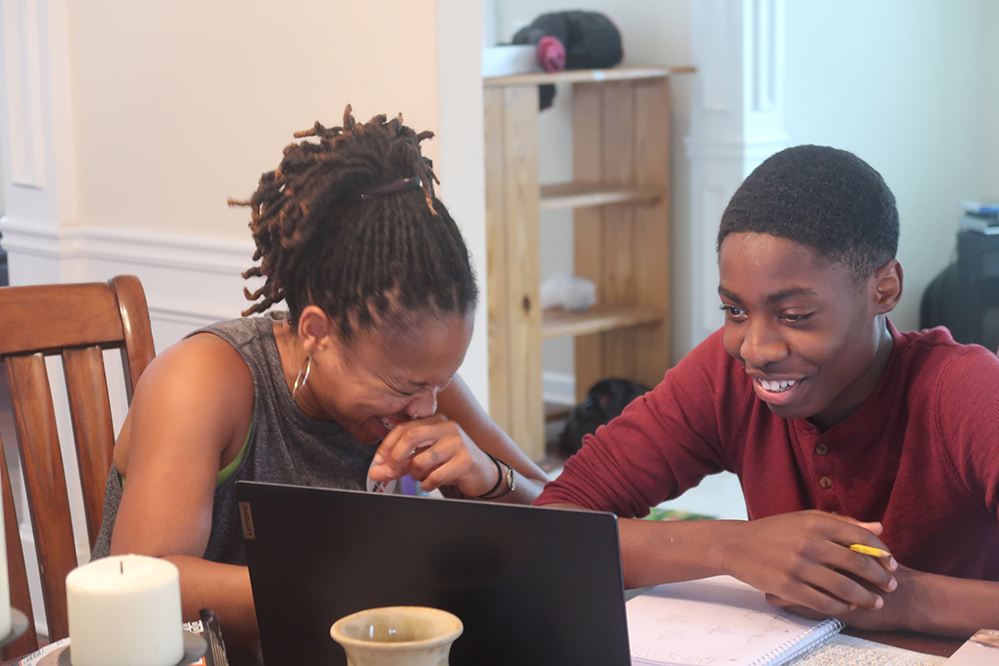 High school math teacher Shoshona Rowell enjoys a moment with a student at Each One Teach One collective. (Mery Simmons)

Molly Jacobsen got a grant to homeschool up to six foster children in Roseburg, Oregon, including her three, who are in grades 7, 8 and 10. The oldest, who is 15, has had a particularly tough time with the uncertainty of the pandemic. Last spring, she threatened to drop out of distance learning.

“During this time of instability, the most stable setting is going to be a homeschool environment,” says Jacobsen. “They don’t need a remote environment; they need to be in relationships.”

Because children may be in foster care for years and in multiple placements, the law protects their right to remain enrolled in the school they attended when they entered the system. A foster parent who wants to change this typically must prove that the move is in the child’s best interest, not simply more convenient for the host family. 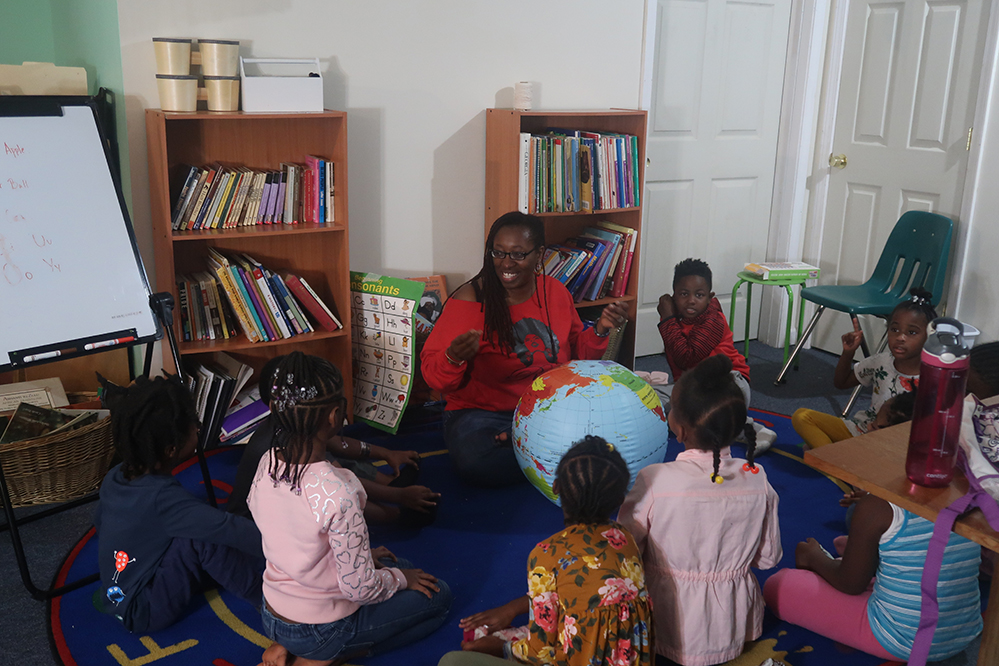 Director and lead teacher Nikita Simmons-Bush holds class at the Georgia learning collective Each One Teach One. (Mery Simmons)

To get permission to homeschool her foster kids, Jacobsen had to appeal to their caseworkers, who were reassured by her decision to hire Brightways Global Academy, a K-12 distance learning program that provides teacher oversight and support to homeschoolers.

Jacobsen will use her grant to pay a tutor to work with the students for six hours a day, using curriculum that includes lots of social-emotional learning and arts — elements that she says are key to helping foster children cope with the pandemic.

“To us, art is very important to learn to express yourself and your emotions,” says Jacobsen. “We can tailor this to the kids’ needs.”

Her $17,230 grant will provide $2,561 per child to cover Brightways tuition, curriculum and 30 hours a week of tutoring. Jacobsen has also gotten donated supplies and is asking participating families to contribute $150 to $275 a month.

When schools shut down in March, Anashay Wright immediately helped organize a pod near her home in Decatur, Georgia, ultimately enrolling her two children in Afrocentric homeschooling programs to supplement the distance learning their current schools were scrambling to implement.

One, the Kibolebole, has offered virtual classes for 16 years. “My kids did not miss a beat,” says Wright, the founder of a nonprofit called Disruptive Partners. “In complete transparency, they were actually receiving a more rigorous and culturally affirming learning experience.”

Wright’s grant will underwrite a three-pronged plan, starting with building an online hub where families can find co-ops, pods, the resources to start their own pods and a place to exchange strategies. She will give leadership training to parents who then coach others on creating a pod or tapping community resources. Members of a “Disruptive Leadership Cohort” will work to influence K-12 policy. 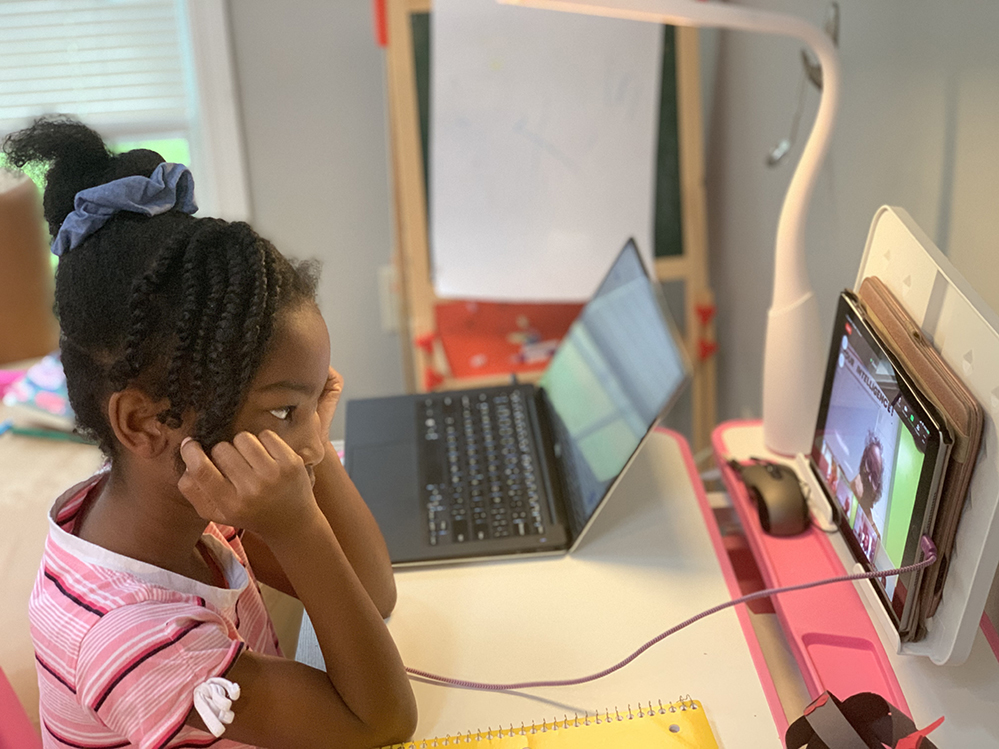 “The power is not in creating the pod; the power is in teaching you to create change,” she says. “How do you leverage your community relationships to support your efforts?”

In addition to $500 stipends for 20 parents in her first training cohort, Wright’s $25,000 grant includes $8,500 for five months of project management, $5,000 for web management during the same time frame and $1,500 for software that will enable her to turn content into online courses.

Another $24,800 grant will provide scholarships for 20 recently resettled refugees to participate in a set of pods being organized by several dozen affluent families in Charlottesville, Virginia, as well as $4,800 to pay an employee of a local refugee services agency to work half time facilitating communication and troubleshooting things like internet access. 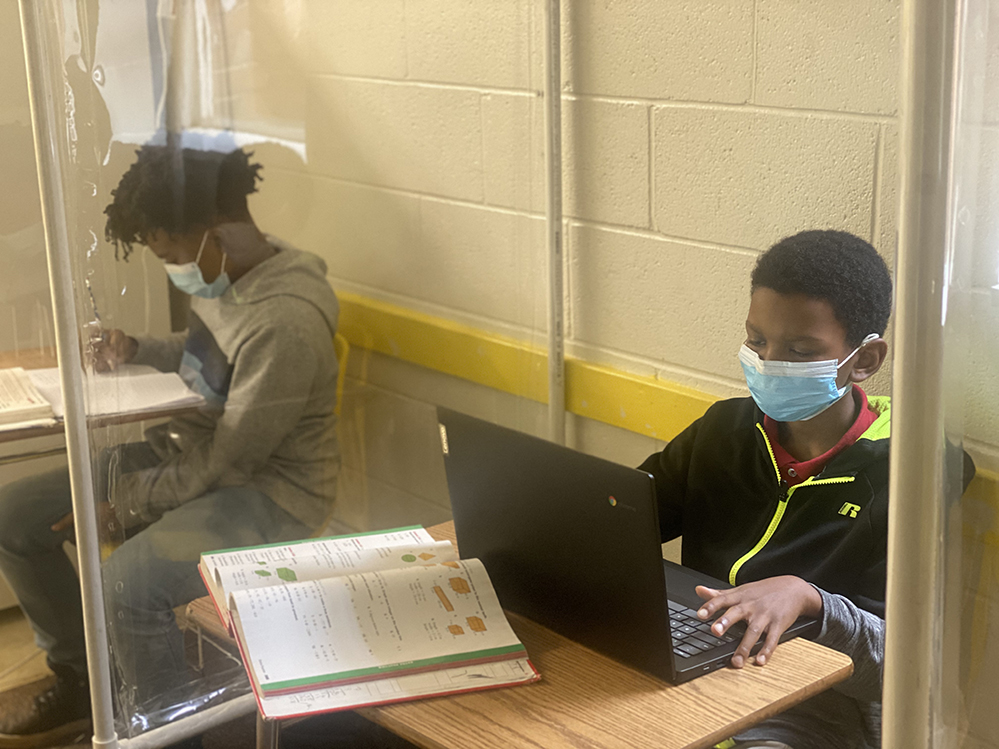 Yet another grant will allow John and Vivett Dukes, founders of Speak Ya Truth in Coram, New York, to oversee the creation of a free homeschool curriculum for families impacted by mass incarceration. They will draw on two Facebook groups for homeschooling families of color, Melanin Village and Melanated Homeschooling Families Support Group, to help shape the content.

The couple’s $10,194 grant includes $3,750 for developing the Find Ya Way Back curriculum, $2,250 for 30 hours of personal support by Vivett, a New York City teacher, to families adopting it and $4,194 for two-month subscriptions to Disney+ for 300 families, so they can access Beyonce Knowles-Carter’s visual album Black Is King.

Community groups in Chicago, Philadelphia and East Boston also received grants ranging from $5,000 to $25,000 to pay for mentors, tutors and supplies for students in disadvantaged neighborhoods who need a safe place to engage in distance learning.

The smallest grant, for $737, went to a mother in Arkansas, which mandates that children be taught in English only. Citing a wealth of evidence on the benefits of bilingualism, she asked for $437 for an evidence-based literacy curriculum and $300 to pay for training for herself to teach her 4-year-old twins to read in Spanish before they enter kindergarten.

“These guys are not going out and buying fancy conference tables,” says Rodrigues. “These folks are doing things in their living rooms.”

In a recent report, the advocacy organization 50CAN argued that during the pandemic, emergency funds should be available for families trying to meet their children’s school needs themselves by forming collectives or joining together.

“We should be creating more pod and microschooling opportunities right now, because it’s one of the best ways to ensure that learning continues in this crisis,” says Marc Porter Magee, 50CAN’s founder and CEO. “If, at the end of this pandemic, families decide this is their preferred method of education, then we should do our best to meet their demands by building this into a long-term plan for restructuring.”

Lake cautions that it’s too soon to know whether pods composed of underserved students will have a long-term impact on how schools respond to families with unmet needs. While a few school systems — most notably Indianapolis — are experimenting with small, in-person learning hubs, most are scrambling with the basics of getting the new school year underway and probably aren’t paying attention to local, parent-driven efforts, says Lake.

“We’d be so foolish to let that latent talent and innovation disappear,” she says. “There are so many people out there with good ideas.”