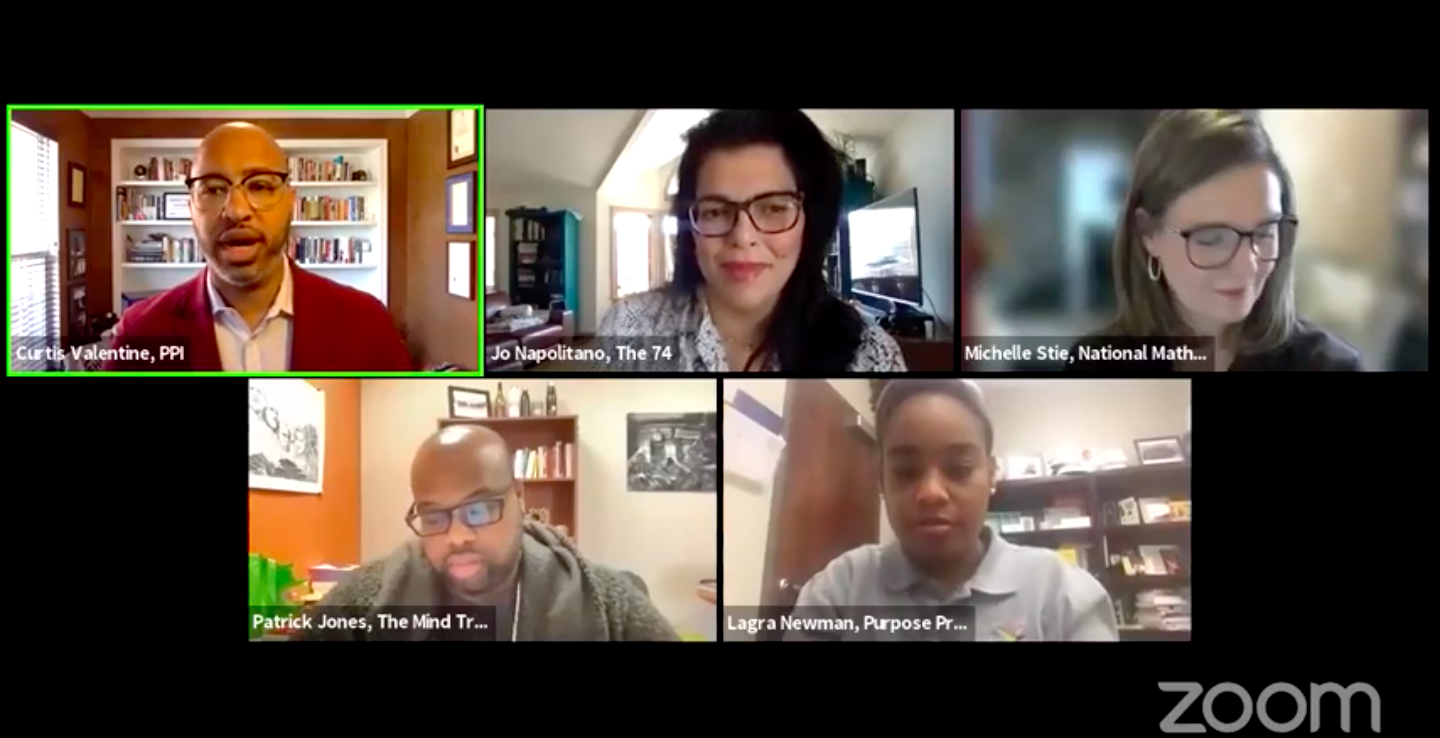 With educators nationwide still puzzling over how to recover from the learning interruptions during the pandemic, the debate between remediation and accelerated learning is one of the hotter topics.

But if you ask Patrick Jones, Senior VP of the Mind Trust in Indianapolis, about how to overcome learning gaps in math, you will hear a clear call for full steam ahead.

“As we move into this space where students are struggling with exams,” Jones said, “we have to, one, stay on task with the current grade level that they’re in and spend more time teaching where they are, and we have to, two, embrace the idea of curiosity and creativity as they are problem solving.”

In a panel discussion co-sponsored by The 74 and the Reinventing America’s Schools project of the Progressive Policy Institute, Jones noted the unique challenge of teaching math and how the process is more complex than simply adding layers of learning atop a foundation of knowledge.

If the video is not playing, go here to see it.

“Math was discovered, created over the course of thousands or hundreds of thousands of years,” he said, “and we expect kids to understand that whole body of knowledge within a 12-year span.”

“A lot of people call math ‘foundational’, where you have this foundation to move into the next foundation. I believe that’s problematic because when you really understand mathematics, it’s compounding foundational, meaning the skills that are taught to understand the next skill, in some ways, can only just help you just fractionally with the next skill because the next skill is actually represented differently in the next stage.”

As Jones sees it, there’s a danger in trying to “go back” to teach foundational skills. “When you hold on to this, kids never gain access to the compounding foundation principle where this new idea will actually be represented in a different way.”

There’s also a practical concern, Jones said. “If I need this student to be proficient at the end of the day, there’s no way I can take the amount of time to go back to teach them how to solve fractions.”

Lagra Newman, the founder of Purpose Prep Academy, a charter school in Nashville, saw first-hand the impact that the pandemic and remote instruction had on math learning. “The pandemic hit us very hard,” she said. “While we were proud of the virtual work our teachers did, of their dedication, of their transferring so many things to the virtual space…, the reality is, there were lots of gaps that developed.”

To overcome some of those gaps, she said, the school is “using the value of time.”

“Our math block is 75 minutes and we’ve added additional interventions for students based on their levels,” she said. The goal is to “intervene very strategically based on what we’re seeing — the gaps that students are demonstrating and understanding that there’s going to be a lot more intervention taking place this year.”

For students, Newman said, “it’s exciting because they’re going to class; they’re moving forward with the lesson per our scope and sequence of making sure that we’re moving through and exposing students to those grade-level skills. But they are also excited about going into their intervention blocks to make sure that they’re getting the additional conceptual understanding that they need.”

Newman also described a technique of “aggressive monitoring” in which teachers circulate a classroom looking to determine which students are accomplishing specific steps in math, and those who aren’t.

Jo Napolitano, a senior reporter for The 74, noted that some of the most significant impacts of the pandemic and remote learning have fallen on students in the later elementary school grades and in middle school. “That’s when they get into a bit of more complex learning and principles that are difficult for some students to master,” she said.

“I think this definitely shows that not only are we not at pre-pandemic levels [of achievement}, but we’ve got a very, very long road to get to a better place,” she said.

Napolitano also pointed out that recent studies about pandemic-related learning gaps could easily be understating the problem. Some assessments have failed to include data from some of the poorest students, she said. “They either were unavailable to take them, whether it was in person or online, they just could not access that. So I would say in my reporting…, these statistics may not include the children who would be performing at the lower levels.”

“In reality, this picture could be worse on the ground because it doesn’t include the most vulnerable children.”

Shennell McCloud, CEO of Project Ready in Newark, N.J., discussed the unique pressures that fell upon many parents and grandparents who had to step in as teachers during remote learning — pressures that were particularly acute for Black and Brown families.

For many parents, she said, the question was: “How do I show up for my child as now the teacher, engaging with a teacher who is providing me the resources and tools from a digital world? But the next question becomes how do I even get that access when either A) I don’t have access to the technology, B) I don’t understand how to work the technology, or C) maybe I have all of those things, but I don’t even have the access to the high-quality internet that is needed to get that access?”

One challenge with math learning that has remained constant before and during the pandemic is getting students excited about it. “At Purpose Prep we’re constantly thinking about how we center our students at the learning, because we know that’s when they see themselves in what they’re learning and they’re so excited about it.”

She wants her students to know the history of math, and its origins in Africa. “The oldest mathematical object was found in Africa,” she said. “That level of information empowers our children to understand that math is you!”

Likewise, Michelle Stie, VP of the National Math and Science Initiative, called for the education funds being distributed as part of President Biden’s American Rescue Plan to go to programs that stimulate students to enjoy math and use it as a problem-solving tool.

“I would just encourage schools to be thinking out of the box,” Stie said, suggesting that new funds be spent on “direct-to-student supports especially for those curricular activities like Mathcounts or like others that are really thinking about making math engaging, fun, relevant, focused on problem-solving and just a really relevant language for all students to help them thrive.”