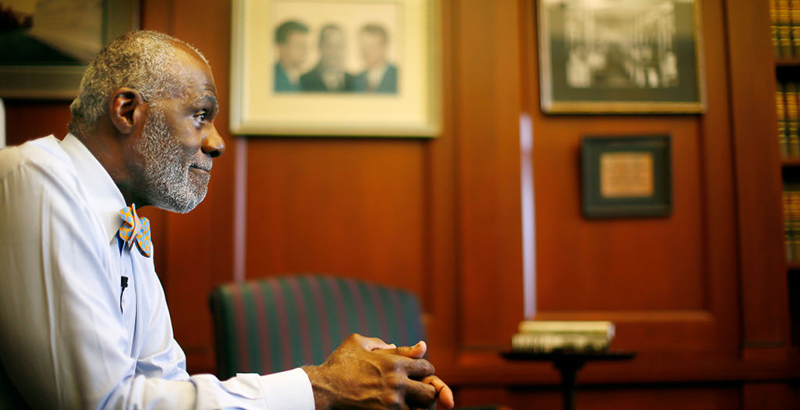 The U.S Constitution says nothing about education; none of the 25 amendments does either.

In Minnesota, the home of former State Supreme Court Justice Alan Page, the state constitution – ratified in 1857 – only requires “a general and uniform system of public schools.”

Page thinks the education provision is way overdue for an overhaul.

“I don’t need to remind everybody what this country looked like in 1857,” Justice Page said. “That was the year that the United State Supreme Court decided Dred Scot in which the Chief Justice of the United States said, and I’m paraphrasing here: those who had been imported as slaves had no rights which the white man was bound to respect. That’s the context in which this language – our current language – was drafted.”

Justice Page is a driving force behind the Page Amendment, which seeks to change the Minnesota constitution to read: “All children have a fundamental right to a quality public education….” He was among several experts to join a panel discussion last week presented by The 74 and the Reinventing America’s Schools project of the Progressive Policy Institute.

“Here we are in the 21st century,” Justice Page said. “Because we’re talking about a system – a system that has systemically and systematically left far too many children behind – you can’t sort of fix it. You have to start over.”

The proposed Page Amendment is among several efforts in various states that aim, in one fashion or another, to establish a constitutional right to a quality education. As The 74’s Linda Jacobson pointed out in an article in November, measures like these would give parents “legal standing” to sue school districts for better education.

Ben Austin, a founding partner of the advocacy group Education Civil Rights Now, said the events of the past 22 months have helped fuel this movement.

“Politicians have been talking about education as a civil right since long before Brown v. Board of Education,” he said. “But I think the modern movement around translating that sound-bite into an actionable civil right for all children, especially all children of color and low-income children in America, really came out of the pandemic.”

“Before the pandemic shuttered schools for well over a year, 20 percent of Black students in America were reading at grade level,” Austin said. “But the pandemic, I think, shined a light on these inequities in a way that made them at least politically indefensible, and parents began organizing across race and class and other lines of political difference.”

Austin also pointed out that Los Angeles parents banded together to file suit against the L.A. Unified School District. In response, according to Austin, the LAUSD “said the quiet part out loud,” arguing “that because students do not have the right to a quality education, the LAUSD is under no legal obligation to prove one and parents have no standing to challenge school reopening policies or anything else.”

While Austin focused on the local dimension of providing a quality education, Dr. Pedro Noguera, Dean of the USC Rossier School of Education, said the civil right issue demands focus on states and the federal government.

“Civil rights have always been defined as federal and, by extension, state requirements,” Noguera said. He noted that the Brown decision “really had far-reaching effects on the whole society,” particularly in housing, voting rights and employment.

But when it came to education “it didn’t live up to the promise of the Supreme Court decision because it didn’t go far enough,” he added. “It said at all deliberate speed, and then the federal government pulled back and it was left to local communities to decide whether or not they would integrate their schools.”

Noguera advocated thinking about schools “the way we think about our highways: if you’re driving through a poor neighborhood on an interstate highway, the highway doesn’t suddenly start to fall apart.” He added: “It shouldn’t matter where you live, every school should be equipped with laboratories, with libraries, with well-trained teachers so that every child has the opportunity in education.”

Jacobson, a senior writer for The 74, noted that both the Page Amendment proposal and a similar effort in California face significant opposition from teachers’ unions. “They’re viewed as a threat to job protections for teachers, like tenure,” she said.

But former L.A. Mayor Antonio Villaraigosa said the idea of education as a civil right is not a conservative notion. “It should be one that people who call themselves progressives ought to be getting behind,” he said.

Noting that he had worked for as an organizer for the teachers’ union before entering politics, Villaraigosa said, “I am unabashedly pro-union, pro-teacher. I was married to a teacher for 20 years; I saw her sacrifices; I saw her commitment to her kids.”

He also said that as a Latino, particularly one that had risen to lead the nation’s second-largest city, he had first-hand experience with the value of a quality education. “How did I break the glass ceiling?” he asked. “Because I could read and write.”

Villaraigosa said he believes that a constitutional guarantee of a quality education “could transform our town.”

“We have to make sure that this high-quality education, however you define it, is connected to accountability, is connected to the ability of people like parents to be able to say to the government: No; you say it’s high quality, but the results don’t reflect that,” he said.

Villaraigosa also scolded progressives “who love to talk about how progressive they are and are unwilling to take on this issue of inequality which has as its base…a lack of education, a lack of investing in everyone at the same levels that we invest in those who are at the highest echelons.”