Union Report: Whom Will the Teachers Unions Endorse for President? 2 Political Case Studies May Offer Some Clues 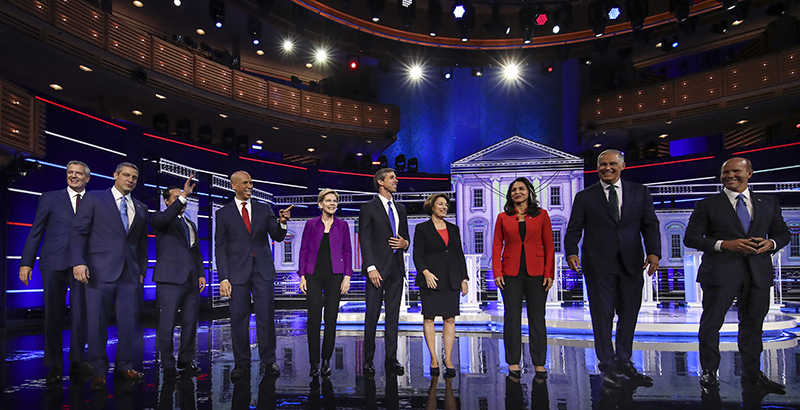 In a crowded field for the Democratic nomination for president of the United States, candidates highly prize labor union endorsements. They need not only the campaign contributions and independent expenditures but also the armies of activists already in place and waiting for orders.

Alas, union endorsement processes, particularly those of the National Education Association and American Federation of Teachers, have come under much criticism from union insiders. In some cases, it is merely sour grapes from supporters of candidates other than the ones NEA and AFT chose. But for organizations that often boast of their internal democracy, political endorsements can be highly undemocratic. The 2016 election is a case study.

To be sure, there never was a chance the teachers unions would endorse anyone other than Hillary Clinton. AFT had endorsed her in October 2007 and was even quicker for her second run, endorsing her in July 2015.

NEA didn’t endorse Clinton until October 2015, but hacked emails published by Wikileaks revealed that the highest levels of the union were working on it and coordinating with the Clinton campaign even before she officially announced her candidacy.

Both unions had a long history with Clinton, they very much liked the idea of supporting the candidate who would have been the first female president, and although Bernie Sanders had strong and vocal support, he was never able to overtake her in national polling. Had Clinton won, as everyone expected, NEA and AFT would have cited their early endorsements as a key reason.

But she didn’t, and the unions were bound to be gun-shy approaching the 2020 primaries, even if there were a clear frontrunner, which there is not. Even so, the 2016 experience has prompted efforts from a number of union activists to revise the endorsement process.

Labor Notes reported that there are separate efforts among some NEA and AFT members demanding a rank-and-file vote on the primary endorsement. AFT has promised a lot of member engagement, but the ultimate decision still lies with its executive council. NEA’s executive committee has already rejected the idea of a vote of the membership, stating that “beyond the cost, such a requirement would eliminate the careful, deliberative process currently used to make endorsements.”

While everyone is trying to avoid a repeat of 2016, they are unwittingly ensuring a repeat of 2004 and 2008. In both years, the campaign began with a number of candidates who looked as though they could win the nomination. When NEA delayed making a choice, some of the union’s state affiliates made their own endorsements independently.

This further delayed an endorsement from the national union. NEA wanted to avoid a situation where it would endorse, say, Barack Obama, when its North Carolina affiliate had already endorsed John Edwards, putting the national and state affiliates on opposite sides. In 2004 and 2008, NEA ended up waiting until the nomination had already been decided before endorsing John Kerry and Obama, respectively.

There is a danger of this happening again. This time, it’s the United Teachers Los Angeles that appears ready to jump the gun. The 32,000-member union will hold a vote of activists next month on whether to endorse Sanders.

But, just as with the national unions, there is some resistance to the process among the rank and file, with one member taking to social media to gather support for online voting by all members on the Sanders endorsement.

Neither national teacher union is a risk taker, so there is bound to be a long wait while the field of candidates is winnowed down. Those who think NEA and AFT should go out on a limb and try to make a chosen candidate a frontrunner, who would then be very grateful after election, should consider the choices made by the United Federation of Teachers in New York City’s 2001 mayoral race.

The powerful union accomplished what one pro-labor publication called a “hat trick”: It endorsed three losing candidates in a single campaign.

The union endorsed Alan Hevesi in the primary, who picked up 12 percent of the vote and finished fourth. No candidate captured a majority, so there was a runoff between Fernando Ferrer and Mark Green. UFT endorsed Ferrer. Green won.

Since Green was now the Democratic Party candidate, UFT endorsed him in the general election. He lost to Michael Bloomberg, which left the union without a friend in the mayor’s office for 12 years.

The teachers unions are extremely effective at protecting friendly incumbents, but they are no better at picking winning candidates from among challengers than is any other interest group. If union members want a particular candidate endorsed, their best bet is to work on their own to get him or her financial, media and polling support among all Democratic voters. A Democrat in the lead, no matter who it is, is more likely to receive a union endorsement than one who is trailing, regardless of his or her policies.