Union Report: One Year Later, It’s Clear — the Janus Effect Is Not Yet What Either Side Had Hoped for, or Feared 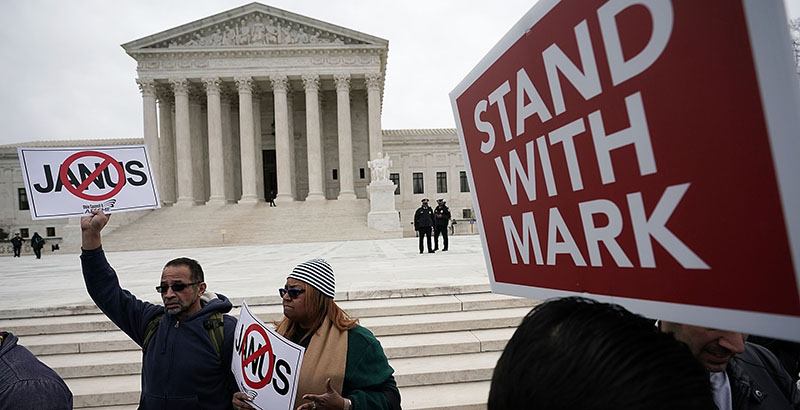 In June 2018, the U.S. Supreme Court ruled that public-sector unions could no longer charge representation fees to nonmembers. The decision in Janus v. AFSCME was expected to have an immediate explosive effect. Unions had argued before the court that the loss of fees would be devastating, and in her dissent, Justice Elena Kagan warned that the majority’s ruling “wreaks havoc on entrenched legislative and contractual arrangements.”

Much of the press followed suit, with headlines such as “Why ‘Janus’ Figures to Juice Income Inequality in America” and “SCOTUS Ruling for Janus v. AFSCME Crumbles Labor Unions.”

It’s now a year later, and the apocalyptic predictions have not come to pass, leading the press to swing uncontrollably in the opposite direction, with headlines such as “1 year after Janus, unions are flush” and “So much for the labor movement’s funeral.”

The immediate effect of the Janus decision was to free fee-payers. Those who were previously compelled to pay upwards of 70 percent of full dues now paid nothing. Nor did they have to do anything at all to achieve this new status. To comply with the ruling, school districts stopped extracting the fees from teachers’ paychecks.

Members, on the other hand, first had to become nonmembers, which meant resigning from the union. Unions established windows and spelled out procedures for doing so. Some are onerous, others not so much, but all of them are more difficult than the procedure for joining.

The membership figures from the California Teachers Association support what a level-headed pre-Janus forecast would have told us.

The union has had comparable membership increases every year since 2011-12. The lack of effect on membership, coupled with the sizable loss of fee-payers, suggest nothing about the relative merits of the Janus case or the ideological composition of California’s teaching corps. Instead, they confirm human nature for us.

Most teachers did nothing.

Will such inaction continue? Yes, to an extent. Current members are unlikely to resign in any great numbers. Over time, however, they will retire. The burden will be on the unions to recruit new members in the same percentages as they enjoyed pre-Janus. The lesson of the Michigan Education Association is instructive.

Representation fees were eliminated in Michigan in March 2013. That October, the union’s president, Steven Cook, went on television to boast of successful retention efforts. “We lost 1 percent,” he said.

In subsequent years, he continued to downplay the effects of the state law. But eventually, he stopped. With representation fees in place in 2012, his union had 117,265 members working in the state’s public schools. By the end of August 2018, it had 84,872 — a loss of almost 28 percent.

We can expect that some state unions will see similar declines, others not as much. The key takeaway is that the loss of representation fees is indisputably a net negative for teachers unions, but not cataclysmic. A union operating at three-quarters of its former capacity can still be formidable, both at the statehouse and the bargaining table.