Union Report: Election Results, #RedForEd, and the NEA: Lessons From Teacher-Candidates About This Year’s Vote — and the Next One 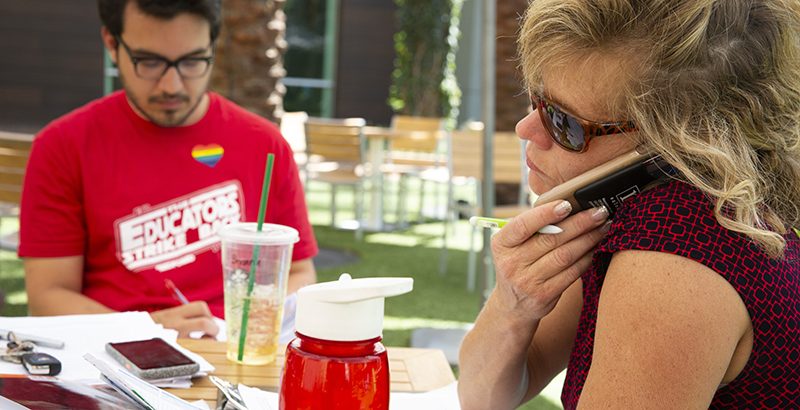 Christine Marsh, a teacher and state legislative candidate, answers a campaign phone call while she records grades from her English students in between campaign events in Phoenix. (Getty Images)

Last week, I expressed doubt that press outlets would revisit the assumptions made prior to the election about teacher candidates for office in the “uprising” states. I was wrong to be so pessimistic, as there were dozens of stories about how the results did not live up to the hype. Most of the stories were not by the same people who hyped it beforehand, but still.

Politico compiled results from many of the education-related races under the headline “How teacher unrest failed to shake up the states in the midterms.” The Washington Post story was “Midterms test the durability of the teacher uprising.” US News went with “Poor Marks for Teachers in Midterms,” while The Atlantic called it “The Questionable Year of the Teacher Politician.”

Local media outlets in West Virginia, Oklahoma, Arizona, and Kentucky largely followed suit, noting that most of the candidates inspired by the walkouts in the spring lost their elections.

These stories were all a welcome acknowledgment of how things went, but most of them still missed the point.

It wasn’t a question of whether union-backed or education-related candidates won in some places and lost in others. That’s true of every election. Any fair reading of the 2018 results would yield a description of “mixed.” Teacher unions posted a big win in the Wisconsin governor race, flipped several statehouses, and appear to have pulled out state superintendent wins in both Arizona and California (maybe). They were least successful in the states that prompted all those pre-election stories in the first place.

What hasn’t been adequately addressed is the extent to which the Year of the Teacher Politician was entirely a concoction of the National Education Association.

Even the stories about the failure of teacher candidates cited NEA’s claim of nearly 1,800 educators on state legislative ballots. But if NEA shared details of their identities, job titles, and numbers in individual states, none of it made it into print. The NEA memo that formed the basis for most of the stories stated, “A large bulk of educators come from states that experienced historic #RedForEd walkouts this spring: West Virginia, Kentucky, Oklahoma, Arizona, Colorado and North Carolina.”

After the elections, the Huffington Post reported NEA’s claim that 1,081 educator candidates won their legislative races. But if “a large bulk” of the candidates came from the states where most educators lost, then how did a majority win, and where did they run?

The Huffington Post reported that “many” of the winners were actually incumbents, but didn’t say how many, and neither did NEA. This is a crucial missing detail, since no one has suggested that the main purpose of the #RedForEd movement was to re-elect the same people to public office.

The pre-election coverage was bad. The post-election coverage improved but was still lacking. Teachers are just as good as candidates for state legislatures as anyone else, if not better. But voters don’t elect legislators to represent specific job titles or public services. They are supposed to represent all the people in a geographic district. Most of those people are not teachers and don’t even have school-age children. They have an infinite variety of concerns, only one of which is how the public school system is run and funded.

After the 2018 election, some people might be shortsighted by suggesting teachers stay in their lane. I have the opposite view. I encourage teachers to become more familiar with issues wholly unrelated to public education. It will not only expand their horizons as candidates, but will certainly lead to more election victories.