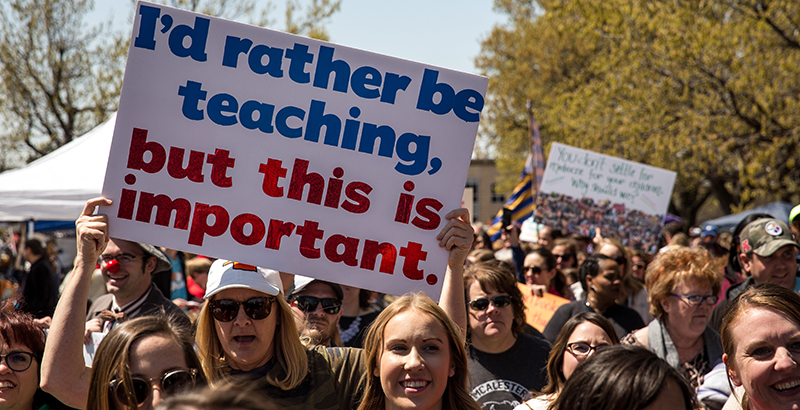 The 2018 election had something to support everyone’s opinion. Republicans added to their Senate majority, but Democratic control of the House is good news for teacher unions — something they have lacked since 2016.

Ever since the statewide teacher walkouts last March and April in West Virginia, Oklahoma, and Arizona, the unions have been remarkably successful in getting the press to publish stories about teacher activism and the record number of educators running for office. A National Education Association press release claimed there were nearly 1,800 educators on the November ballot for state legislative offices.

“They are set to unleash a historic #RedForEdWave in statehouses across the country,” the union told us.

When the strikes ended, unions and their allies promised to “Remember in November” by bringing their fight to the ballot box. We have since been treated to dozens of accounts describing how teachers could carry Democrats to victory in statehouses across the country. Now that the election is over, we can evaluate how the educator candidates performed in the places where the teacher fire was the hottest — West Virginia, Oklahoma, and Arizona.

NEA’s claims about the number of teachers running for office left many questions about its methodology unanswered. The union tried to tell a narrative of fed-up classroom teachers becoming neophyte candidates, but its numbers included many career politicians seeking re-election. Nevertheless, I have used every source at my disposal to match educators on the ballot Tuesday with the union’s criteria. The results did not impress.

Richard Ojeda, who as a member of the House of Delegates was the biggest legislative supporter of the teacher strike, was defeated in a bid for a seat in the U.S. House of Representatives.

The Democrats picked up two seats in the West Virginia Senate, leaving Republicans with a 20-14 advantage. Three educators won and four lost. The three who won were all incumbents.

Democrats also picked up six seats in the West Virginia House. The GOP still has a 59-41 edge.

Thirteen educators won and 25 lost. Ten of the 13 educator winners were incumbents.

Oklahoma teachers followed up their statewide walkout by qualifying 112 educators for legislative races. Only 58 made it past the primaries. The remainder also had a tough time of it.

Democrats picked up one seat in the Oklahoma Senate. Republicans still have a 39-9 majority. Four educators won and six lost. Only one of the four winners belongs to the Oklahoma Education Association.

Democrats lost two seats in the Oklahoma House, increasing the GOP advantage to 76-25. Voters pushed 17 educators to victory, but 31 lost. Only four of the 17 winners belong to OEA.

Additionally, former attorney general Drew Edmondson — identified as a former teacher in the media even though his experience was limited to a few years in the 1970s — was defeated in a bid for governor. Career educator John Cox was defeated in his attempt to become state schools superintendent. Voters defeated a ballot measure that would have freed up more tax revenue for teacher pay.

Arizona teachers were able to defeat a ballot initiative that would have expanded the state’s school voucher program, but failed to mirror that success with candidates.

Though Democrats held out hopes of flipping the Arizona Senate, the GOP retained its 17-13 edge. Fourteen educators won and only seven lost, but 11 of the 14 winners were incumbents.

Democrats picked up four seats in the Arizona House, but Republicans still have a 31-29 majority. Educators won 16 races and lost 14. However, 14 of the 16 winners were incumbents.

Educator David Garcia lost his campaign for the governorship, and speech pathologist Kathy Hoffman was trailing in her race for state schools superintendent with 99 percent of precincts reporting.

I have not broken down the statehouse races in Kentucky, where there were also massive teacher demonstrations in the spring, but press reports suggest there wasn’t much effect in either the House or the Senate.

It is tempting to criticize the unions for overpromising, but they are advocacy organizations and obliged to paint a rosy picture for their side. It is entirely another thing for the press to blithely accept this picture as if it were objective reality. The level of credulity displayed by many reporters was embarrassing, prompting a slap from education media critic Alexander Russo in his column for Phi Delta Kappan even before the election.

“Few of those relying on these figures seemed to question the numbers being reported by the NEA, ask how they were collected and compiled, or even wonder what the previous numbers were,” Russo wrote.

It is possible some of those same outlets will revisit their assumptions, but I think it more likely that we will see more profiles of those teachers who were victorious, with no further mention of those who were not.