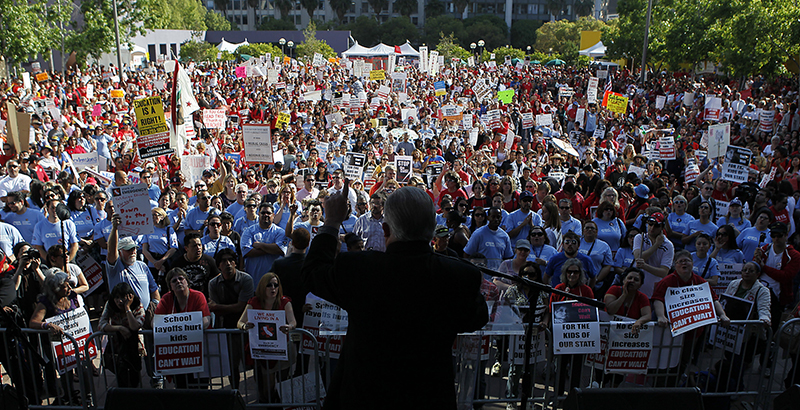 The Bureau of Labor Statistics released its annual report on union membership last Friday, and for a change there was hopeful news for organized labor. Although BLS reported the overall unionization rate unchanged at 10.7 percent of the U.S. workforce, the raw numbers show the rate increased from 10.69 percent to almost 10.75 percent.

The unionized share of the workforce also increased in both the private and public sectors, a heartening trend given that the labor movement has been sustained for decades by its more than one-third share of government employees — while private sector membership fell to 6.5 percent.

“In the face of a challenging year, the power of working people is on the rise,” said AFL-CIO president Richard Trumka.

Alas, the encouraging numbers did not extend to local government employees, who are by far the most highly unionized segment of the economy. This category includes police officers, firefighters, and public school teachers. The overall unionization rate for these workers fell from 40.3 percent to 40.1 percent.

The initial BLS release does not further disaggregate by job title, though I expect those numbers will be available in a few weeks. American Federation of Teachers president Randi Weingarten seemed to indicate that her union bucked the trend, fueled by the addition of “40,000 educators in Puerto Rico.”

Weingarten’s numbers assume every eligible education employee in Puerto Rico will become a union member — a claim she can make only because AFT has a rather odd arrangement with the local union, the Asociación de Maestros de Puerto Rico. According to the agreement, AMPR pays AFT $1 per member per month — about one-twentieth of the normal rate — and none of it is taken from teacher paychecks. The local union pays out of its own pocket.

Puerto Rico aside, AFT’s membership accounting has some anomalies, including an unexplained disappearance of 69,000 members in 2016.

Projecting future trends from the 2017 BLS numbers would be a mistake. If, as expected, the U.S. Supreme Court puts an end to agency fees this spring in the Janus v. AFSCME case, the effect on public sector union membership would be immediate. But I think many are overstating how drastic the changes will be, in the short term, for the labor movement.

For one thing, Janus does not affect private sector unions, and that is where most of the current union membership growth resides. Second, while unions will have to get employees to sign up in order to receive any money from them, they can’t be counted on to inform those employees that they have the right not to sign up. It may take years before many government workers are even aware they don’t have to pay.

Finally, unions have made it clear they have no intention of giving up exclusive bargaining privileges. As long as they maintain their status as the sole negotiator of employee salaries, benefits, and working conditions, they will continue to hold a certain level of power in policymaking. And just because a teacher or support employee isn’t a union member, that doesn’t mean he or she can’t be motivated to make common cause with unions on campaigns and legislation.

Those on both the left and the right predicting an utter collapse of unions once Janus is decided are in for a nasty shock. Union membership rates have been falling steadily for 40 years, and who’s to say they are less powerful now?