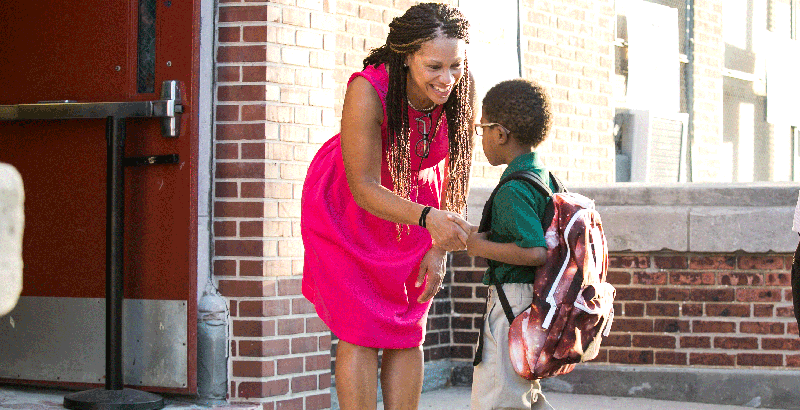 Community circles, a high-volume mix of cultural pride and on-your-toes academic quizzing now routine in charter schools across the county, have their origins at North Star, one of the most famous charter schools in America. (For more on the origins of community circle, see my video interview with North Star co-founder Jamey Verrilli.) Visitors to North Star in the early years numbered up to 100 per month, including many aspiring charter startup leaders who walked away with memories of watching Jackson in action — and a determination to do something similar at their school.

Long regarded as one of the highest-performing charter networks in the country, Uncommon — with 53 schools and 19,000 students in New York, New Jersey and Massachusetts — may have the highest college success rate of any district or charter network serving low-income students.

Jackson has been chief schools officer K-8 at Uncommon; she now becomes one of the highest-ranking African-American charter school executives in the country. Her replacement, Juliana Worrell, is also African-American and is best known for her successful track record at Newark’s North Star Academy Alexander Street Elementary, Uncommon’s first turnaround school.

Recently, I had a chance to talk with Jackson.

The 74: When I was researching my book The Founders, about charter school creators, it seemed like every single one had visited North Star, admired those morning community circles and devised something similar for their schools.

Jackson: Community circle was my favorite part of the day, hands down. They were an opportunity for me, as principal, to inspire kids but also check their learning. I treated it like a classroom.

Our visitors, from 50 to 100 per month, were district and charter teachers and school leaders. I’ve seen the circle adopted across the country. Sometimes someone will send me a video just to say thank you. It makes me so proud. There’s the joy of it — parents would drop off their students and then ask to stay for community circle. So it became a ritual for students, parents and teachers.

I’ve been to charter schools that have community circles in the morning where the school leaders seem to have no idea where the idea originated.

A lot of schools have no idea it came from us. That’s the beauty of it — as long as we are able to impact kids in a positive way, that’s OK.

What does the near-term future look like for Uncommon?

We’re looking at how our students move from elementary to middle school, and from middle to high school. We know those are pivotal transition points for both students and families. We want to make sure, both in terms of culture and academics, that we are setting our students up to make a smooth and strong step-up to a new phase of their school experience.

For grades 8 to 9, we want to look at the curriculum in grade 8 and ask: How is that is preparing them, for example, for ninth-grade algebra and algebra II? It’s planning backward to keep our promise of to and through [college]. What experiences do the students need to have so that we keep that promise?

It’s my observation that, compared to other charter networks, Uncommon puts more of its college success emphasis on strengthening the K-12 years, less on tracking the alumni through college.

I was part of forming the vision. We want to give the students a strong academic foundation and also build character. Character is really important. That’s what will get you through college when you are struggling.

As for college supports, that [emphasis on K-12] allows us to deep-dive into the students still having difficulty transitioning from their high school years to the college years. If you need the help, we’re going to give it to you, showing up to talk to your college counselor, going into a counselor’s meeting with the students. If they are struggling with financial aid, we will make sure they make it into the right office. Everything to make sure you’re on track.

Give me an example of what Uncommon does to boost its college success rate.

We are obsessed with data. We have broken that down at all levels of the organization. We take high-level data to the school level, showing principals how to look at data in short periods of time. Every six weeks, we give the interim assessments, and based on what that tells us, we inject curriculum changes and schedule changes. In addition, every other week, a manager comes in to walk the school with the principal, giving feedback on what would make the school better in the next two weeks.

Also, everyone says you can’t teach kids you don’t love, and that’s true. For me, you have to see the kids for who they are, and have to see them [for] who they can become. And you have to show love. Kids really know. It doesn’t matter if you’re 5, 10 or 17. If you do not love them, they know that, and it impacts them in ways that doesn’t lead to the highest bar of achievement.