Two of the Strongest Anti-Charter Bills Fail in the California Legislature, but Two Others Move Ahead as Both Sides Claim Victory 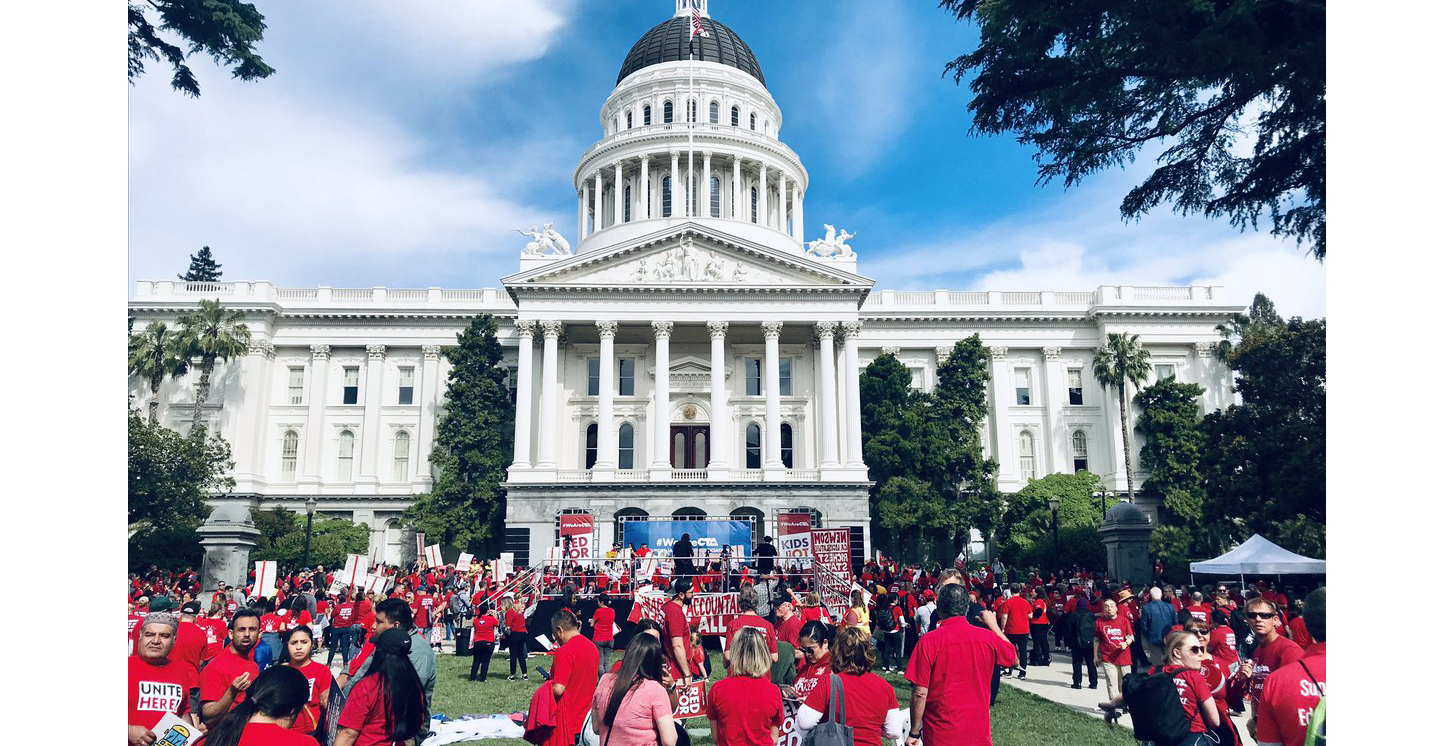 Protesters – many affiliated with the California Teachers Association – gathered on May 22 in Sacramento in part to advocate for tougher regulations on California charter schools. (Maripaz Berlin)

What started as a package of four bills tamping down on charter schools in California quickly became two last week, as legislation in the Assembly and the Senate that looked to cap the schools in one chamber and place a moratorium on their future growth in the other were both withdrawn.

The demise of Assembly Bill 1506 and Senate Bill 756 before a vote was taken on either was seen as a decisive victory by charter supporters.

“Charter public school families’ voices were heard loud and clear by Sacramento politicians: We cannot and will not accept legislation that limits access to great public schools,” Myrna Castrejón, president and CEO of the California Charter Schools Association, said in a statement released Thursday.

“Today, the collective power of charter school leaders, teachers, families and students defeated this extreme legislation and with their voices, we’ll continue to do all we can to defend great public schools throughout California,” she continued.

But proponents of the bills, including California NAACP education chair Julian Vasquez Heilig, remain focused on the prospects of the surviving legislation, seeing last week’s events as a step in a larger process. Those two remaining bills are:

● AB 1505 — The bill gives local school districts sole authority to approve new charter schools and to consider how new schools would impact the district’s budget in the approval process. Since new charter schools typically attract students — and their per pupil funding — away from traditional public schools, many expect that this measure would make it much more difficult for new charter schools to be approved. AB 1505 passed May 22 and will now go to the state Senate.

● AB 1507 — This bill closes a loophole in state law that has let some districts boost their budgets by approving charter schools outside their boundaries. AB 1507 would require all charter schools approved by a district to be located within it. It passed on May 13 in the state Assembly and is also now headed to the Senate.

“The commonsense transparency and accountability in [AB] 1505 has a really good shot in the Senate. I don’t think a plausible outcome of this legislative session is that California will do nothing,” said Heilig, a professor of education leadership at California State University, Sacramento.

On Wednesday, Sen. Maria Elena Durazo sidelined the Senate moratorium bill, which she authored. The bill would have placed a two-year halt on new charter schools in the state unless the Senate passed further regulations. The measure could return for consideration next January, according to Senate rules.

The next day, Assemblyman Kevin McCarty opted to hold his bill on the last day it was eligible for a vote in the chamber. AB 1506 would have mandated a statewide cap on charter schools, which are publicly funded but independently run, to be determined at the end of the year.

Just a week earlier, hundreds of protesters — many affiliated with the California Teachers Association — marched through Sacramento demanding that state representatives pass the bills, among other legislation. The teachers union sees charter schools as draining traditional district schools of badly needed funding and argues that charters, which are generally not unionized and have grown rapidly in California, require stricter regulation.

The union protest at one point intersected with a smaller, opposing demonstration by black parents that was organized by the California Charter Schools Association. The association says that black students are the lowest-performing student subgroup in California after special education students and that black and brown families, whose neighborhood schools are failing, deserve high-quality options.

3 California NAACP Chapters Break With State and National Leaders, Calling for Charter Moratorium to Be Overturned

While the bills are dead for now, both Durazo and McCarty suggested they could return to the legislature in the future.

“We are fighting for good public education. It is worth it to take the time to get it done right,” Durazo said in a prepared statement.

The two remaining Assembly bills are not yet scheduled for votes in the state Senate but are expected to come up before the end of the legislative session in mid-September. With the failure of the more aggressive charter restrictions, questions remain about whether they will actually make it into law. The Assembly was also expected to craft a new appeals process for charter school applications to go along with AB 1505, but it’s unclear where that stands.

Gov. Gavin Newsom, whose election was opposed by charter school backers and supported by the teachers union, has been publicly silent on the legislation. In May, he signed legislation making charter school operations more transparent, including that they be subject to open meeting, public records and conflict-of-interest laws.

Some California officials see a clear distinction between the still-alive AB 1505 and 1507 and the other now-dead moratorium and charter cap legislation.

While speaking with the San Francisco Chronicle, California Congressman Rob Bonta described a desire among lawmakers to stay away from “blunt instruments” in the charter policy debate, instead favoring more precise regulation.

“People want more of a scalpel,” he said.

In the past, the state has been a relatively stable ground for the growth of charter schooling. Its 1992 Charter Schools Act represented one of the movement’s first successful statewide initiatives. And under former governor Jerry Brown, the state instituted few substantial regulations on the schools until last year, when it banned for-profit charters.

The continued momentum of two of the original four bills signals to Vasquez Heilig that past reluctance to tighten control on charter schools in Sacramento may be over.

“California is the leading edge of a lot of this political movement,” he said. “People are realizing that the deregulation of charters have not led to appreciable achievement differences, especially for African Americans.”

A 2014 CREDO study found that low-income black students in California charter schools gained 36 more days of learning in reading and 43 more days in math a year than their district school counterparts. Low-income Latino students gained an additional 22 days of learning in reading and 29 days in math compared with their district peers.