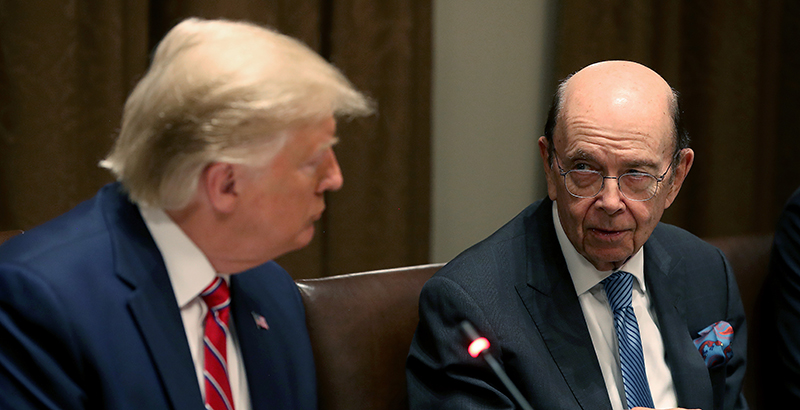 After a whiplash 24 hours, the Trump administration said late Wednesday that it would try to find a way to include a citizenship question on next year’s census. Justice Department lawyers and the Commerce Department had said Tuesday evening they would move forward without the question. But by Wednesday morning, Trump contradicted them, calling the news “fake” and adding, “We are absolutely moving forward, as we must, because of the importance of the answer to this question.”

Government attorneys notified a federal court of the change in plans, and White House officials were looking for a solution to meet Trump’s demand to add the question despite the Supreme Court ruling, but hadn’t yet found one, The New York Times reported.

Justices last week ruled that the administration’s supposed reason for including the citizenship question, enforcement of the Voting Rights Act, was suspect.

Government officials and civil rights groups have said adding the question could lead to an undercounting of Hispanic and immigrant residents, and education advocates have said that could lead to some school districts not getting federal grants they need and are otherwise entitled to.

Those advocates had celebrated the court’s ruling last month, we covered in The 74 last week:

Education advocates were hopeful but still concerned Thursday after the Supreme Court ruled that the Trump administration — for now — cannot add a citizenship question to the 2020 census.

“The Supreme Court’s decision to not include the citizenship question in the 2020 census is the right thing for public education,” Austin Beutner, the superintendent for Los Angeles Unified School District, said in a press release.

Both civil rights advocates and government officials said that adding the question, for the first time since 1950, would lead to an undercounting of immigrants and Hispanic residents. Census counts are used to allocate funding for a number of education programs, including Title I grants for low-income students, Head Start preschool programs and school lunches, so including the citizenship question would leave some school districts without the federal funding they need and are entitled to, education advocates had warned in briefs filed with the court.

Los Angeles schools, the second-largest district in the country, faced a loss of as much as $20 million in Title I funding if the citizenship question were included, money which pays for some 200 teachers, Beutner said. About a quarter of L.A. Unified’s roughly 486,000 students are English learners and nearly 75 percent are Hispanic.

“The citizenship question is not some abstract, legal issue. It has real consequences in our schools,” he added.

The complicated, multi-part ruling from the high court said the Commerce Department’s alleged justification that the information is necessary to enforce the Voting Rights Act was not sufficient, with Chief Justice John Roberts saying it “appears to have been contrived.” Justices sent the case back to lower courts.

Civil rights advocates who had brought the case said they didn’t believe there is time for the administration to bring the case back through the courts with a new justification, particularly given their repeated claims that they have to begin printing the census forms on Monday.

“I think there really, really is not time, and if the administration tries to rush it, that’s a clear red flag,” Dale Ho, the head of the ACLU’s Voting Rights Project, said on a call with reporters after the ruling Thursday.

Other officials have said the government could wait until the fall to print the census, several news outlets reported. President Trump on Thursday afternoon criticized the decision, writing on Twitter that he had “asked the lawyers if they can delay the census, no matter how long, until the United States Supreme Court is given additional information from which it can make a final and decisive decision on this very critical matter.”

The National School Boards Association and its state affiliates will continue to watch the case and “continue to advocate for the removal of the citizenship question from the 2020 census in order to preserve federal funding for the myriad programs that benefit the more than 50 million children attending our public schools, their families and their communities,” CEO Thomas Gentzel said in a release.

Though the citizenship question is off the table for now, urban communities in particular still face challenges in getting an accurate census count, given housing mobility, language barriers and a general wariness of government officials, the Council of the Great City Schools said in a release.

“The challenge for urban school officials, local government leaders, and community groups will be to effectively reach out to residents to encourage universal participation in the 2020 census survey,” the group, which represents large urban districts, said.

Civil rights leaders have launched a collaborative campaign with dozens of organizations to encourage participation in the census next year. “We know our work isn’t over. It’s just beginning,” Vanita Gupta, president and CEO of the Leadership Conference on Civil and Human Rights, said.

The Census citizenship question is out for now. Trump’s intent to stoke fear in immigrant communities by denying them representation is clear. We will ensure our students, our communities know the facts and make sure #WeCount in the #2020Census 📝 Join us: https://t.co/miz0uigGqd pic.twitter.com/iTAH8mmtko