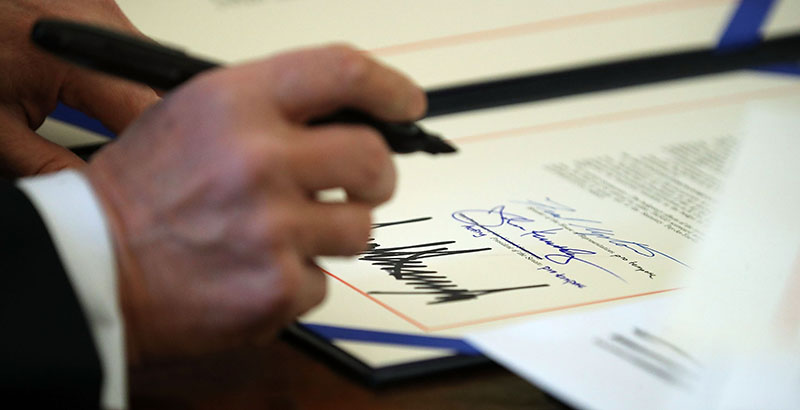 Individuals will still be able to deduct some contributions to state tax-credit scholarship programs under new rules the Treasury Department released Tuesday, but the regulations fell short of the full exemption choice advocates had sought.

The issue stems from the 2017 tax reform law, which limited to $10,000 the amount of state and local taxes that may be deducted from federal taxes. Lawmakers in high-tax, Democratic-led states such as New York, New Jersey and Connecticut developed workarounds to try to bypass that cap, by allowing taxpayers to contribute to programs that would give a state or local credit that could also be deducted from their federal taxes.

A Treasury proposal released last year aimed to block those new workaround programs by ending federal tax benefits for donations that also got a state tax credit. That change also applied to long-standing state tax credit programs across the country, like those that provide scholarships to low-income students.

School choice advocates raised their concerns to the Treasury Department and hoped to have scholarship-granting organizations exempted from the new rule, but Treasury officials said that wasn’t possible, John Schilling, president of the American Federation for Children, told The 74.

“We just wanted to make sure the feds were not going to disincentivize contributions to scholarship-granting organizations,” he said, emphasizing that it was never Congress’s intent to limit these contributions when it rewrote the tax law.

Under the guidance released Tuesday, taxpayers can treat donations to state tax-credit programs as state and local taxes, and deduct them from federal taxes up to the $10,000 cap.

After the $10,000 limit, taxpayers may only deduct from federal taxes any amount beyond what they receive in state tax benefits. So, in a state that offers a 70 percent tax credit for donations to a scholarship-granting organization, for example, a taxpayer who donates $1,000 could deduct $300 from his or her federal taxes.

In December, the Treasury Department finalized rules regarding tax credits for businesses, allowing them to still deduct from federal taxes even if they also get a state tax benefit, but rules for individuals remained up in the air.

“I’m a little disappointed it took so long to get this out, but I’m hopeful we’ll see individual donors as well as corporate donors to continue to invest generously in these [organizations],” Schilling said.

Tax-credit scholarship programs exist in 18 states and serve about 300,000 children. Under most programs, individuals or businesses donate to a nonprofit organization in exchange for a credit on their state taxes. The nonprofit then gives private school scholarships to needy students, often those with disabilities or from low-income families. Opponents have criticized the programs as loopholes that inappropriately funnel public funds to unaccountable private schools.

Education Secretary Betsy DeVos, a longtime school choice advocate who has proposed a federal tax-credit scholarship program, said the guidance shows that the Trump administration supports both taxpayers and families.

“We are deeply grateful to the families, donors, nonprofits, and state and federal policymakers who raised their voices about the benefits of education freedom and who articulated the unintended consequences of the proposed rule during the public comment process,” she said in a release. “The final rules and additional guidance announced this week are fair to students and taxpayers alike.”

Other choice advocates, meanwhile, were more critical of the ruling, with EdChoice calling the $10,000 limit a “whisper” of hope. Though the rule “remains an unwelcome change in tax law,” donors should still give generously to support the thousands of children across the country who need school choice options, Leslie Hiner, vice president of legal affairs for EdChoice, said in a release.