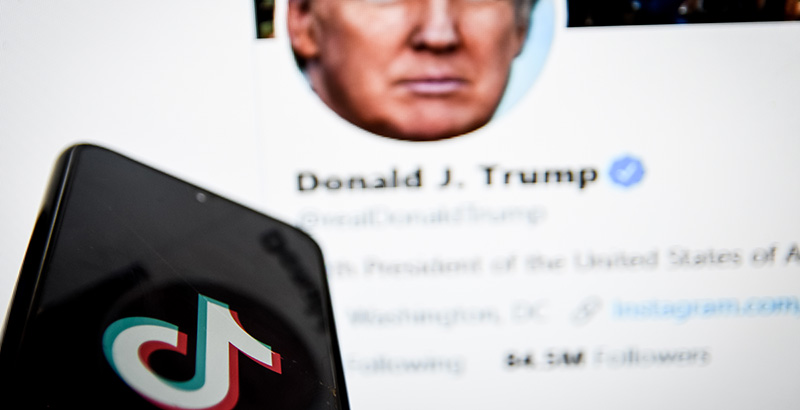 When schools closed in March because of the coronavirus, Vanessa Cronin had no idea how to make instructions for her Spanish lessons engaging enough for her students to read.

“So now I’m supposed to type my instructions in an email?” Cronin, who teaches at Marine Science Magnet High School in Groton, Connecticut, asked herself. “I could picture my kids at home saying things like, ‘Too long. Too boring. I won’t read this.’”

Then she remembered how much her students love TikTok, the video-sharing social media app that President Donald Trump now wants to ban as a threat to national security.

Cronin began recording the short videos and posting links on Google Classroom. The response was immediate.

“OMG Señora, I love your TikToks. They make me laugh,” she said one student told her.

“It was beautiful,” Cronin said. “We were no longer together, but this app somehow made us all feel closer to each other.”

The alleged threat to national security comes as the app’s popularity is exploding. Holed up in their homes since March, tweens and teens have passed the time doing the Renegade and other viral dance moves on TikTok, sharing banana bread recipes and testing their core strength with plank challenges.

But on Thursday, Trump issued an executive order that would ban the app from operating in the United States in 45 days if it is not sold by its Chinese parent company, ByteDance.

“TikTok automatically captures vast swaths of information from its users, including Internet and other network activity information such as location data and browsing and search histories,” Trump said in the text of the order issued Thursday evening. “This data collection threatens to allow the Chinese Communist Party access to Americans’ personal and proprietary information — potentially allowing China to track the locations of Federal employees and contractors, build dossiers of personal information for blackmail, and conduct corporate espionage.”

One digital marketing agency estimates that since November 2018, TikTok’s monthly active users in the U.S. have jumped from 20 million to more than 80 million, 60 percent of them between the ages of 16 and 34. According to another analysis, children between 4 and 15 now use TikTok as much as YouTube. Similar to Instagram — but relying on 15- or 60-second clips — TikTok allows users to change their voices, create sounds and add special effects to their videos.

Educators like Cronin find the app to be an accessible method for turning what they do in the classroom every day into digital content.

“It’s awful,” Cronin said about the possibility that she wouldn’t be able to use TikTok anymore, calling it her “go-to tool” when she has to teach something students might have a hard time with.

Juliette Reyes, who graduated this spring from American Heritage School, a private school in south Florida, said TikTok videos were a vital resource in preparing for her Advanced Placement exams.

“Some TikToks have highlighted free educational resources such as online college courses, book search engines and other materials I could then use to prepare for big exams or general assignments,” she said.

She and her friends also depended on TikTok to follow the College Board’s changing decisions about conducting AP tests this year.

“Everyone was confused,” she said. “But kids on TikTok would use funny clips and videos, not just to help me prep for the exam but also keep me updated on any changes.”

Other students say TikTok has been their source for news about COVID-19 and conflicts throughout the world.

“TikTok has particularly helped me consume current events in a more digestible manner without having the need to scroll through numerous articles on a news feed,” said Victor Ye, who graduated this year from Glen A. Wilson High School in Hacienda Heights, California. 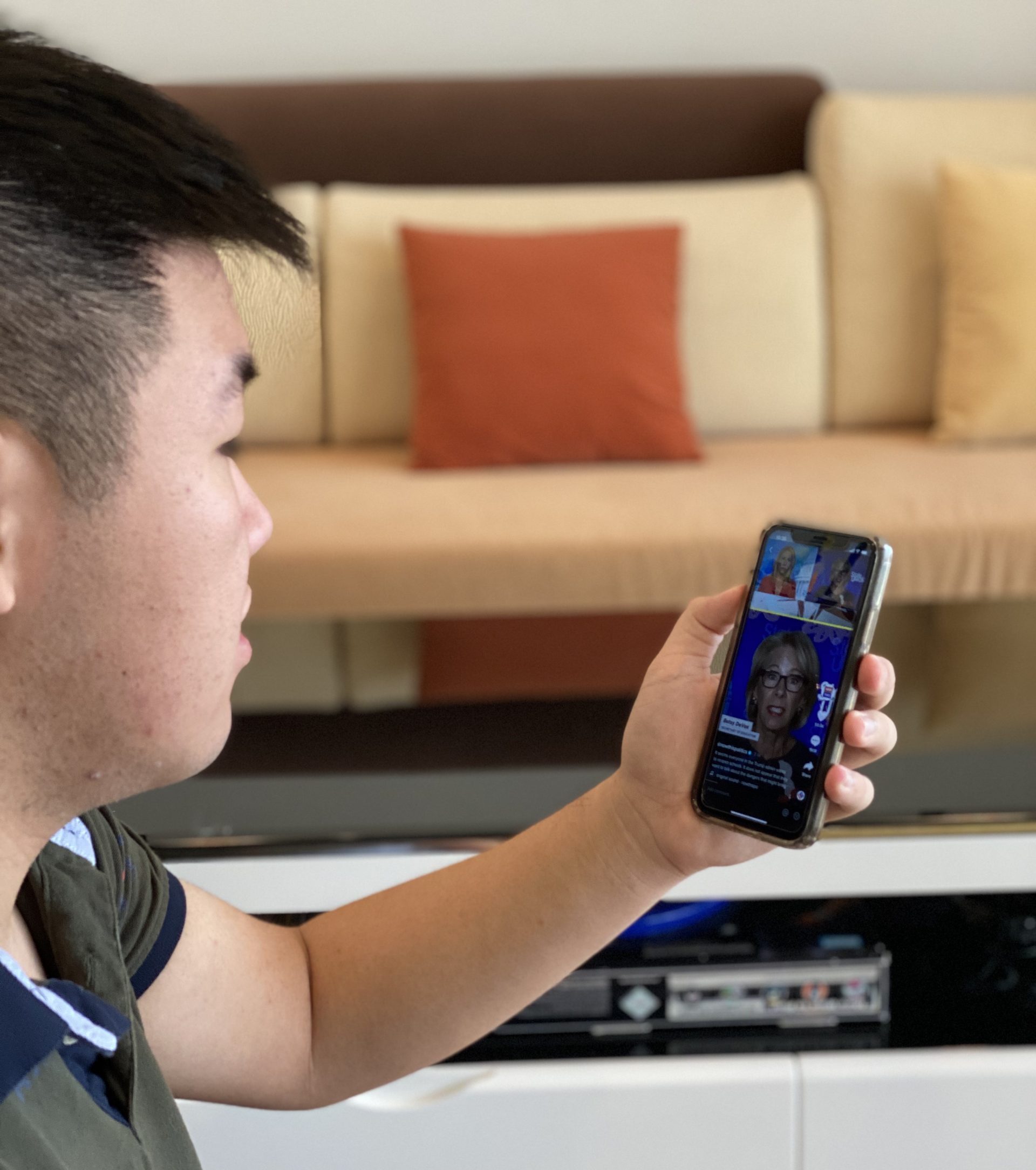 The president has turned up the rhetoric against TikTok amid concerns that the app would spread political propaganda as the election nears. TikTok users claimed they helped embarrass the president by inflating attendance expectations at a June rally for Trump in Tulsa, Oklahoma.

Some branches of the military have already prohibited service members from downloading the app. The House voted last month to keep it off government-issued phones, and the Senate followed suit with a unanimous vote on Thursday.

Questions about the app’s fate, however, come as the company is attempting to refine its image for an education audience, including millions of young users stuck at home. In May, TikTok launched #LearnOnTikTok as part of its $50 million Creative Learning Fund. The initiative features videos from educational institutions, nonprofits and celebrity scientists such as Bill Nye and Neil deGrasse Tyson, and includes grants to educators to adapt their content knowledge for distance learning.

Though the program was originally intended as a three-month effort, the company has extended it through October because many school districts will start the year in an all-virtual or hybrid format.

The U.S. division has formed a partnership with the National Association for Media Literacy Education on “Be Informed,” a series of infomercial-type posts focusing on discerning fact from opinion, checking the credibility of sources and analyzing graphics.

The company has also worked with the National PTA, Common Sense Media and other internet safety groups on a youth portal that instructs young users in creating secure passwords, blocking other users and following digital literacy basics.

But the president said he would follow through with the ban unless ByteDance sells TikTok. On Sunday, Microsoft released a statement saying that it was “prepared to continue discussions to explore a purchase of TikTok in the United States.” The president, however, has added that the U.S. Treasury should receive a portion of the sale, which could complicate the transaction.

TikTok has said it does not share user data. TikTok U.S. General Manager Vanessa Pappas used the platform to address the issue. “We’re not planning on going anywhere,” she said. “We’re building the safest app because we know it’s the right thing to do.”

Bart Epstein, CEO of the Jefferson Education Exchange, which helps education leaders make decisions about educational technology, said TikTok is smart to market itself as a source of educational content.

But he thinks the app has greater potential as a vehicle for education researchers to share their findings, just like many do on Twitter. And with the right privacy protections, it could allow phones to be used in the classroom as a way for students to create media, instead of being viewed as a distraction.

He called Microsoft the underdog in educational technology compared to Google, but he suggested the company could use TikTok to increase its share of the market.

Due to Microsoft’s support of educational causes, he said, “It wouldn’t surprise me to see them look for ways to synergistically get benefit from TikTok in the education market.”

Teachers who already have a large following on TikTok include Shane Saeed, a fourth-grade teacher at Red Hawk Elementary in Erie, Colorado, who posted this video on the different purposes authors have for writing:

Another is Maya Espiritu, an Oceanside, California, elementary teacher who posts vocabulary-building and read-aloud videos.

What color is your bumbershoot? Mine is maroon and orange with swirls. ##learnontiktok ##tiktokpartner ##readinglist ##learnenglish ##vocabulary

Other teachers find the platform useful for giving students suggestions on ways to improve their focus.

“I realized there is a niche of teaching educational psychology,” said Desmond Fambrini, a former Teach for America member who now works as a homeschool teacher and tutor. He’s posted videos on topics such as chewing gum in school and finding the right time of day to do schoolwork.

As with Pinterest, teachers are using TikTok to post classroom hacks and ideas for lessons. Past research has shown that some of the most popular sites for teachers are not always aligned with academic standards.

TikTok probably won’t be the platform for “deep, rich curriculum content,” said Julia Kaufman, a senior policy researcher at the RAND Corp. But it does create opportunities to hook students with bite-size information, she said.

“To this day, Black Wall Street and the Tulsa race riots are rarely covered in schools,” she said. “I would’ve never learned this information if it wasn’t for a TikTok video that gave me the foundation of knowledge I needed to do my own research.”

In surveys of both teachers and parents, RAND researchers are hearing that keeping students interested in learning has been the greatest challenge during the pandemic. “Using [TikTok] to try to engage students makes sense,” Kaufman said.

Cronin also uses the app to reach other teachers with her @empoweredteachingpodcast. But it’s the connections she’s maintained with students during lockdowns that she’s found especially valuable.

“We all became closer during tough times because of this silly app,” she said. “I get paid to teach my students a second language, but if I don’t speak the same language that my kids do, I will not be able to do my job efficiently.”