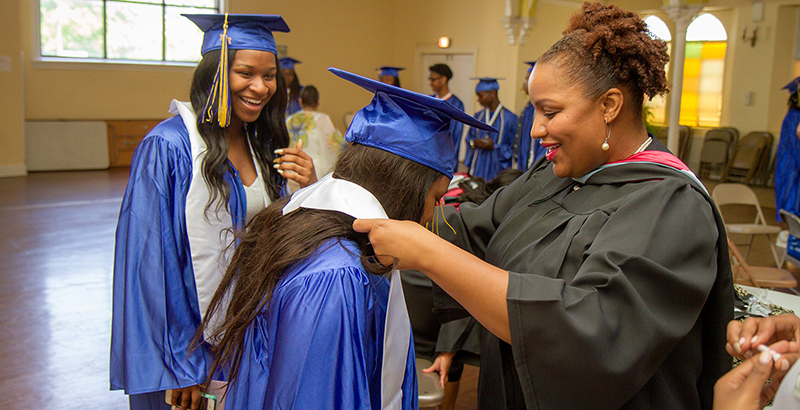 Communities in Schools of Chicago

Pharmaceutical giant AbbVie will contribute $55 million to help low-income students succeed in school. The donation announced Friday will be divided among three organizations: Communities in Schools, City Year, and the University of Chicago Education Lab, all of which serve low-income students in Chicago.

Communities in Schools will receive $30 million, the largest gift in the organization’s 40-year history. Of that, $6 million will go directly to Communities in Schools of Chicago, which will use the grant to place full-time social workers in 16 additional high-poverty schools to provide struggling students with academic and social-emotional support.

Communities in Schools is a national nonprofit that works to help disadvantaged students graduate from high school by connecting them with adults who provide social and academic support.

“With this gift … we will grow our work to add an additional 16 Chicago public schools where we will place full-time masters-level social workers in the schools,” she told The 74. “We will be able to work directly with kids who are most at-risk for dropping out and getting off-track … keeping them in school and on track and able to graduate.”

The remaining $14 million will help the organization expand in other regions. Local chapters will compete for 10 to 20 grants, said Communities in Schools president and CEO Dale Erquiaga. He noted that AbbVie wanted to work with organizations that have a successful track record and are committed to evaluating their results.

“One of the things that AbbVie really appreciated about the Communities in Schools model is our evidence base, and this many students all coming on board at the same time in diverse parts of our country will give us just another glimpse into what integrated student supports can mean in the lives of students all across the country,” Erquiaga told The 74.

The ‘Diplomas Now’ Way: Better Identify At-Risk Kids, Do Whatever It Takes to Get Them to Graduation Day

The $55 million will also benefit two other organizations with similar missions, City Year and the University of Chicago Education Lab.

City Year Chicago will receive $5 million to expand its program in Chicago Public Schools. City Year is a nationwide AmeriCorps program that places young adults in schools to serve as role models for students, supporting them academically, socially, and emotionally.

The organization’s San Jose branch will receive $1.6 million to expand its afterschool STEAM program. Finally, the remaining $3.4 million will allow City Year to improve and expand its math and literacy programs, which are used nationwide.

Pete Settelmayer, executive director of City Year San Jose, said the money will allow his organization to potentially reach as many as 1,250 additional students, exposing them to science and technology in a region where opportunities in those fields are plentiful.

“We are in the heart of the tech industry. If we can expose [students] early on to what that means — it’s right in their backyard — they have a huge opportunity to advance as they move through high school and college,” Settelmayer told The 74.

As one of the University of Chicago Urban Labs, the Education Lab aims to study and assess innovative programs in Chicago Public Schools to improve student outcomes. AbbVie will contribute $15 million for the lab to evaluate innovative programs in Chicago Public Schools, including Communities in Schools’ effort to increase high school graduation rates over the next three years.

AbbVie, which is based in North Chicago and also has offices in San Jose, is a global pharmaceutical company focusing on immunology, oncology, virology, and neuroscience. The corporation is committed to making $350 million in charitable donations in 2018; it made $100 million contributions each to the Ronald McDonald House Charities and to organizations providing relief to Puerto Rico after Hurricane Maria earlier this year.

The corporation selected the three nonprofits because of their proven history of improving student outcomes and their ability to “leverage each other’s strengths,” said Melissa Walsh, AbbVie’s vice president of corporate responsibility and philanthropy.

“We’re a research-based biopharmaceutical company, and so the way that we do just about everything here at AbbVie is driven by data and it’s driven by evidence-based methodologies,” Walsh told The 74.

“We really do apply that to our philanthropy,” she said, adding that the three organizations make up “a terrific portfolio of programs put together for those students that we’re trying to reach.”