This 12-Year-Old Won Nation’s Largest Middle School Science Contest for Her Study of Color, Vision and the Human Brain — and $25,000 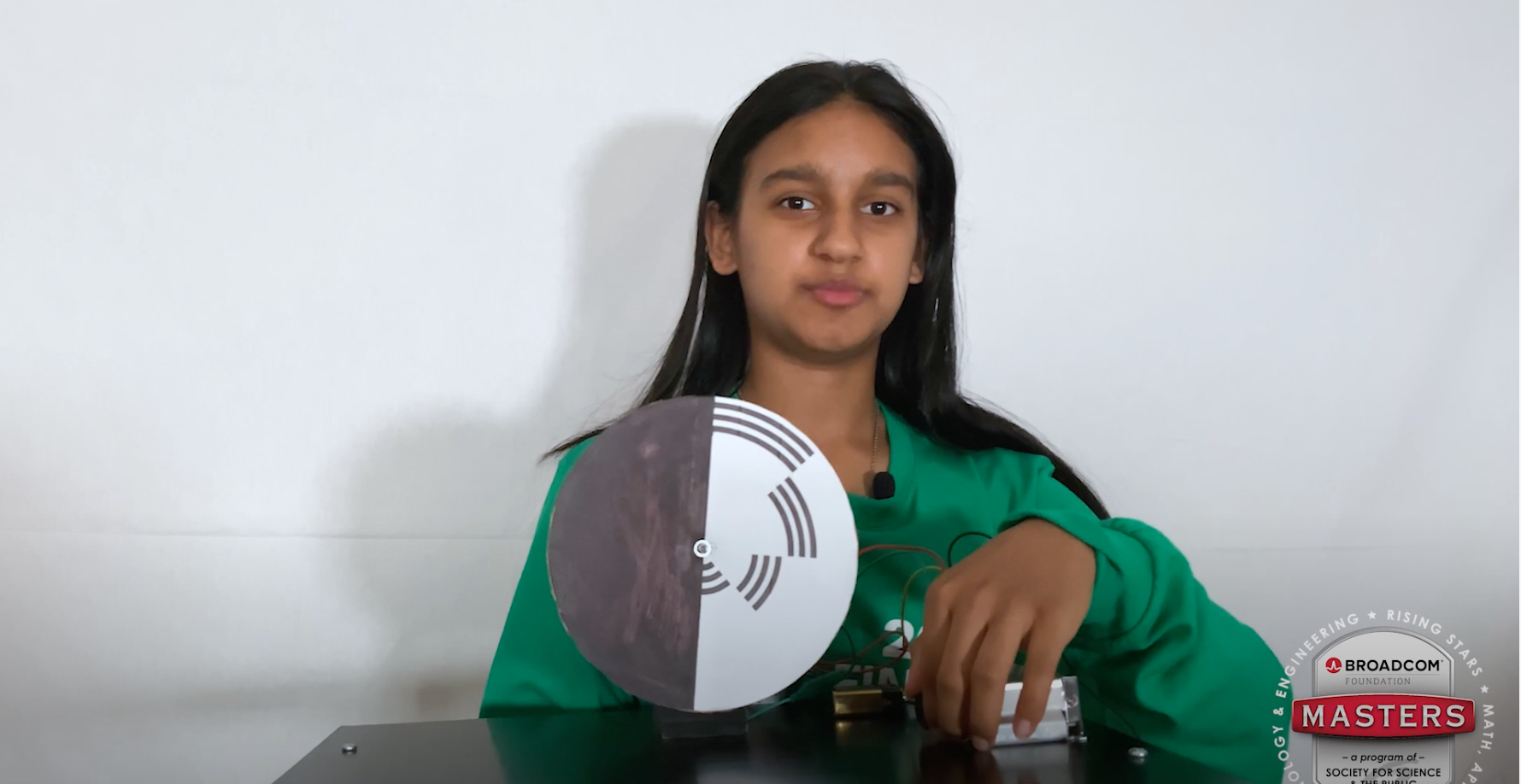 Ishana Kumar, a seventh-grader at Robert E. Bell Middle School in New York’s Chappaqua Central School District, has been fascinated by optical illusions and how the eye sees color since she was 7 years old. This fall, she harnessed that fascination to create an experiment clever enough to win the nation’s largest middle school science fair.

Imaginary colors are an illusion that people sometimes see after viewing a spinning black-and-white wheel. Scientists believe the wheel may stimulate areas of the retina at different times, changing the brain’s responses to the disk and creating the illusion of different colors.

For her project, Kumar wanted to find out whether fatigue in the retina could change these perceived colors. She created her own spinning wheel, known as a Benham’s disk, and had test subjects conduct the traditional experiment by viewing the spinning disk and recording their perceived colors. Then, she asked her subjects to stare at a bright red, blue or green light to create retinal fatigue before returning to the spinning disk to see if the imaginary colors they saw were different from those they’d seen before.

She reached a conclusion: “It is possible to change our perception of imaginary colors,” she says.

Kumar first won a local science fair in the spring. Then, she took top honors in a virtual regional fair and was selected out of 3,500 applicants as one of 30 finalists for the Broadcom MASTERS (Math, Applied Science, Technology and Engineering as Rising Stars) competition, held by the nonprofit Broadcom Foundation and the Society for Science & the Public. Typically a week-long event held in Washington, D.C., the event went virtual this year. Through videoconferencing, the finalists showed off their projects, demonstrating critical thinking, communication, creativity and collaboration in STEM areas. Kumar, 12, won the top title and the $25,000 Samueli Foundation Prize that went with it.

While much of her background research started early in 2020, the heavy lifting of experiments happened during the pandemic, forcing her to get resourceful. “I had to make a setup in my garage, and only one person could come at a time,” she says. “I made extensions of some of my tools so we could stay completely socially distanced, and everyone had a mask.” Through it all, though, the pandemic did not restrict her ability to run her trials, which she devised herself. She says, “I am really happy with what I got to do.”

Still, she wishes COVID-19 hadn’t limited her test subject list to 10 and prevented her from working in a controlled environment inside a lab. She wishes she could have practiced presenting her project at science fairs but says Broadcom’s virtual week still allowed her to “meet 29 other really cool, smart and amazing people who live all over the country.”

Ajmera says Kumar and all the participants showed high levels of ingenuity, working on projects in makeshift locations and with reduced research abilities. It may be too soon to see if conducting research at home changes the types of projects students work on, but she expects in the future to see data mining become more popular. The society has focused on providing at-home, hands-on learning opportunities for students and teachers during 2020.

For this year’s Broadcom winner, though, research into imaginary colors may well have multiple applications in years to come. The young scientist, who also plays the flute, fences and is part of her school’s environmental club, thinks she’ll retain a focus on understanding the brain, whether through neurosurgery, neurology or even physics.

And along the way, she’ll keep studying illusions and color perception. “There are a lot of places you can take this project,” Kumar says. “You can go anywhere.”

Correction: The Society for Science & the Public has focused on providing at-home, hands-on learning opportunities for students and teachers during 2020.